Can electric potential be discontinuous?

I am studying the following problem, which is 9.11 of "Modern Electrodynamics" by Zangwill.

The idea is that you have a wire attached to a perfectly conducting sphere (radius $a$) buried into the ground (where the Earth has conductivity $\sigma_E$); in between, there is a layer of conductivity $\sigma_2$ (perhaps the Earth was churned up or something, resulting in different electrical properties). We need to find the resistance between the end of the wire and a point deep (i.e. infinitely far away) in the ground. 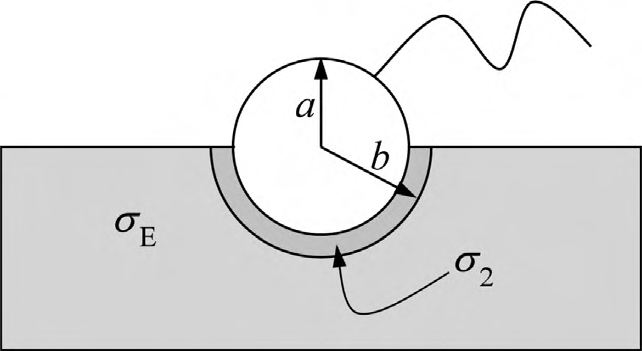 I understand that we need to find basically the voltage, that is, the potential difference between the end of the wire and the point deep in the ground. I'm imagining a current $I$ through the wire that spreads over the surface of the conducting sphere, and from there, radially into the ground. The voltage is constant over the sphere's surface, which simplifies things. Then we say, on one hand, that the current $I$ spreads uniformly over the hemisphere below the ground at radius $r$: $j = I/2\pi r^2$. On the other hand, in any region,

since all the current is radial. Putting these together, one would think

Note: The solution manual for Zangwill agrees with this method of doing the problem, and treats the discontinuous potential without comment.

Edit: The text of the solution as I have it reads as follows: 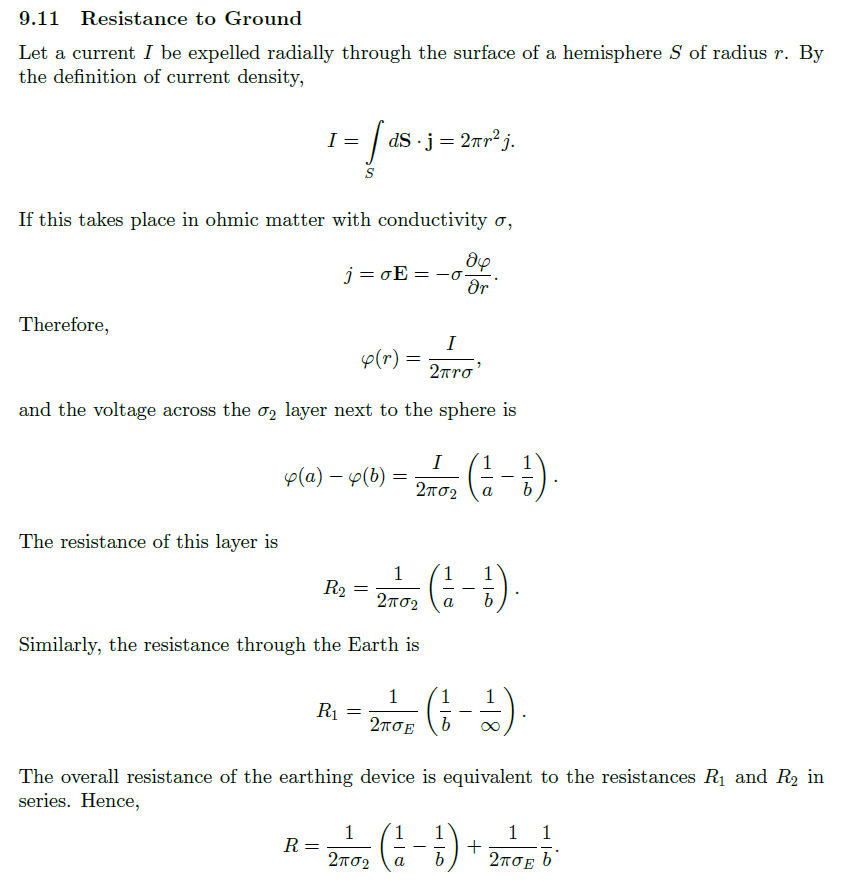 if the E-field is finite, there can be no discontinuity in the potential.

Second, the boundary value that will actually help solve your problem is derived from Gauss' Law (as shown here). The condition is that the normal component of E-field at the interface between two materials has a discontinuity proportional to the sheet charge present on the interface.

There will be a sheet charge on the surface of your perfectly conducting sphere, so that discontinuity will appear there.

But at the interface between your finite-conductivity regions, the sheet charge will be determined by the polarizability of the two materials, and the boundary condition will be that the normal component of the displacement field (usually denoted $\vec{D}$) is continuous. This is shown here.

Not the answer you're looking for? Browse other questions tagged homework-and-exercises electricity electric-current potential dielectric or ask your own question.