According to many high school textbook sources, water perfectly wets glass. That is, the adhesion between water and glass is so strong that it is energetically favorable for a drop of water on glass to spread out and coat the entire surface. Students are often made to memorize this fact, and many physics questions use it as an assumption.

However, it's perfectly obvious that this doesn't actually happen. If you put a drop of water on glass, it might spread out a little, but it doesn't remotely coat the whole thing. In fact, I've never seen anything like the phenomenon described as "perfect wetting".

Can perfect wetting actually be observed for everyday materials? If not, what are the main additional factors preventing it from happening, as the textbooks say?

In everyday life glass surfaces are always covered by a layer of, well, crud. Glass surfaces are exceedingly high energy surfaces due to the high density of polar hydroxyl groups and they attract pretty much anything. This means that outside of a colloid science laboratory you will never encounter a clean glass surface.

I spent many years carrying out experiments involving interactions with glass surfaces, and to get the surface clean we had to clean it with chromic acid. A quick Google found instructions for doing this here, but if you ever feel tempted to try this at home do note the comment in that article:

The dichromate should be handled with extreme care because it is a powerful corrosive and carcinogen.

If you survive the cleaning process then you will find a water drop placed on the glass does have an effectively zero contact angle and the drop will spread out almost completely.

But it's only under these extreme conditions that you will see this. Just leaving the glass exposed to the air for a few hours is enough to coat it with a monolayer of whatever organic detritus if floating around (which if humans are present is quite a lot :-). Once this happens you aren't measuring the contact angle on glass, you are measuring it on whatever organic film is coating the glass.

It's because of surface energy 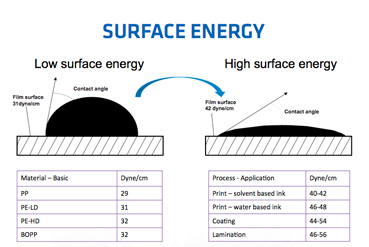 You can just cover glass with a thin layer of material that has low surface energy (like teflon) and then water/stuff won't stick (will stick a lot less) to it...

Check this surface tension article on Toppr for much more information.

To answer the question, yes and no.

The reason why we don't observe water, spread out on its own, on glass, as much as it can, is because of >> see accepted answer :D

However if you spread it yourself, then yea you could make a very thin coat of water covering the whole glass, which could be described as perfect wetting.

I take care of older people's houses. When I cleaned their windows, the water would not distribute itself over the glass in a smooth way. Many small disconnected patches were visible. After I had cleaned them, these patches had grown in size significantly. Bt they were still disconnected. That was a sign that I didn't clean them "to the bottom".

I'm gonna say it's due to surface tension. In darkroom photography unless you're careful you'll get waterdrop marks on your negatives when you hang them up to dry. There's a commercial product called Photoflo (sp?) that stops this. Being cheap I found a couple drops of ordinary liquid dish detergent in the last rinse does about the same thing a lot cheaper. There are also "wetting agents" or some similar name for products you put into your dishwasher to avoid water spots on glasses, same idea. This is also related to a classic experiment to measure the thickness of an oleic acid molecule by putting a drop into a water bath and measuring the area it spreads out to. 8th grade science, 50 years ago but I still remember it.

First of all, the glass will have a surface covered by water vapor. The oxide surface grabs water from the air with a vengeance. A few hundred degrees C will get rid of most of it, possibly >300 C (sometimes for hours in a vacuum) is needed to get all of it. Of course there are different kinds of glasses; soda glass, which contains major amounts of the oxides of silicon, sodium, calcium and aluminum, is the most common.

A drop of water will not spread spontaneously on glass. The physics behind this is that water molecules like water molecules (remember "like dissolves like"?). The term "like" is not scientific: a better term is "cohesive energy," meaning the energy required to pull a water molecule out of the droplet. For example, oil and water don't mix - the attraction of water to water is greater than of water to oil, or oil to water.

This discussion can also be made in terms of surface energy, but I think is is more clear and more generally applicable to cast it in terms of cohesive energy, which is close in meaning to "heat of vaporization."

The glass surface obtains a hydrated coating by both physical and chemical adsorption. This means that the glass surface will look a little like water, i.e, the effective cohesive energy of the surface will be a little less like pure glass and slightly more like water. In the battle for water, the drop will still win but the hydrated glass gets in a few licks. The glass likes glass a lot and is not itself dissolved by the water.

Nonetheless drops of water can be spread over the glass by physical energy such as with a spatula (as in one of the referenced videos) without re-forming into drops or droplets. In this case the water is introduced onto fresh hydrated surfaces that it quickly hydrates all the more. Then the glass surface looks more like water to the water. It will take energy to reform the drops - they may not reform spontaneously.

So my answer is that glass can be totally wetted under some circumstances but not in the (unobtainable) purist of systems, and not spontaneously unless acted on by external energies.

Entropy of mixing, free energy of droplet formation and other complications mess up a pure discussion, but I think the above discussion gets most of it. The quantitative description of the concepts described above are used in industry from cosmetics to metallurgy and are founded in chemical thermodynamics.

36
Why does water pouring from a glass sometimes travel down the side of the glass?
5
Why does tea rise in the pot but water doesn't?
3
Why doesn't the water spill out?
0
Tennis ball in a glass of water
1
Why does water in a glass ripple but oil does not?
2
Why would/do you wet glass after scoring it to break it?
2
Laminar Flow From Outdoor Faucet
0
Why does water take a "wet" path?
1
Squeezing water out from wet cloth
1
Glass state of water