I am starting to learn about Feynman diagrams and I wonder if this reaction could happen as a physical process on its own, as opposed to part of a more complicated diagram:
$e^- \to W^- + \nu_e$ 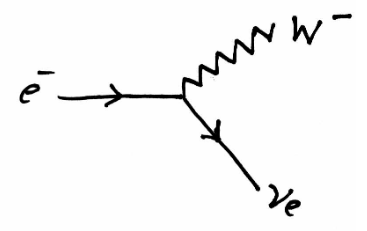 An electron emits a $W^-$ boson and an electron neutrino.

Following the logic used by David Z here:
First-order EM Feynman diagram?
The question asked if a first order electromagnetic diagram could happen on its own. For example, an electron coming in and emitting a photon
$e^- \to \gamma + e^-$.
The answer given by David Z was that this was forbidden because in the rest frame of the initial state ($e^-$ on its own), the energy was $E=m_ec^2$, while the energy in the final state is at least $E=m_ec^2 + E_\gamma$. I am wondering why we need to look at the rest frame of the electron in the first place.
My logic tells me that if an electron highly energetic comes in, it should be able to emit a photon and end up with less kinetic energy. This is wrong but could someone tell me why?
Following David's logic, the reaction above could not happen on its own because the rest mass of the electron is obviously much smaller than the reduced mass of the $W^- + \nu_e$.
Could someone clarify my ideas?

My logic tells me that if an electron highly energetic comes in, it should be able to emit a photon and end up with less kinetic energy. This is wrong but could someone tell me why?

Good question. Basically, the thing is that energy conservation and momentum conservation have to apply in every reference frame in order for the interaction to be valid. That's a consequence of relativity, that the laws of physics need to work just as well in every frame. So in this case, even though you're only considering things from a frame (presumably your own rest frame) in which the electron is moving quickly, whatever happens also needs to be "legal" from a reference frame in which the electron is at rest and you're the one moving. An observer in that reference frame would notice a huge violation of energy conservation if the electron turned into a W boson and a neutrino, despite the fact that you might not find that too weird.

I also expect that if you tried to actually do the calculation to figure out the final energies and momenta of the W boson and neutrino, even in the reference frame where the electron is moving quickly, you would find that the math doesn't work out - it'd be impossible to conserve both energy and momentum given the masses of the particles involved. But it's not really clear that you can't do that unless you actually go through the calculation. The benefit of considering the process from the electron's rest frame is that, in that rest frame, it is obvious that the math can't work, so you get to bypass actually doing it.

One need not go to the center of mass of the electron to see that the reaction is against energy and momentum conservation.

This means that either energy or momentum is not conserved, because the two four vectors have to be identical in this diagram.

My logic tells me that if an electron highly energetic comes in, it should be able to emit a photon and end up with less kinetic energy.

Not the answer you're looking for? Browse other questions tagged particle-physics inertial-frames feynman-diagrams or ask your own question.

2
Electron and photon collision
2
Why is this particle interaction forbidden?
7
Why does an electron react differently to a virtual photon in the interaction between two electrons and between an electron and a positron?
0
How can high energy, cosmic gamma photons reach the earth, when they are capable of creating (lepton) particle anti-particle pairs?
1
Can physical processes be deemed possible or impossible with Standard Model vertices alone?
1
Is this Feynman diagram possible?
2
Feynman loop diagrams
0
Feynman diagram and bosons