Mass points of a Mass-spring model

Let's say I have a mass spring model like the one in the picture below: 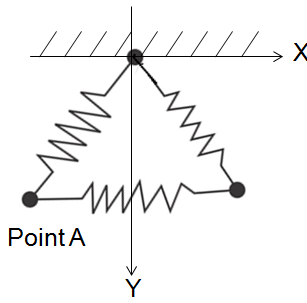 So, there are 3 parts of the spring joined together in an equilateral triangular manner. Each of the joints has a mass of $m$. The resting length of each of the springs is $l$. The top joint point of the spring is fixed to the ceiling.

Now, if I were to pull both the lower points of the spring model such that each of the springs extend proportionally by $\Delta l$ change of length, and release. Now, I want to find an equation for Point A (indicated in the picture above) under gravity and sprint forces when springing back to position. The assumption is all the angles remain at $60$ degrees in every iteration when it springs back.

What I did is:

Let $k$ be the elasticity of the spring.

Then, for the X-axis component of the equation,

The acceleration of the spring going back to original x position would then be dividing both sides by the mass $m$.

For the Y-axis component of the equation with consideration of gravity as $g$,

Similar to the X-axis, I thought I would consider the total of the extended length plus the projection from the x-axis onto the y-axis, and then minus the gravity resistance.

However, it turns out that I am wrong for the Y-axis component. The given answer is:

I don't understand why is it so for the Y-axis, especially when the the gravity turns out to minus the projection and the extended $\Delta l$ is not added as part of the force.

you have taken the right approach by summing the forces and setting that equal to mass times acceleration.

For the Y-component you have included a $k$ $⋅$ $\Delta{l}$ which should not be there. In the X-direction, this term represents the force contribution from the bottom spring (the horizontal one), however this spring does not contribute at all to forces in the Y-direction (because it lies completely in the X-direction) thus has no effect on the Y-axis equation.

Also, in the diagram you provided, the Y-axis points down. You wrote your equations as though the Y-axis points up, and this has caused a sign error. Gravity points down along the positive Y-direction, thus the $mg$ term should be positive. An extension of the spring by $\Delta$$l$ leads to a restoring force that will pull point A in the negative Y-direction, thus the $k$ $⋅$ $\Delta{l}$ $⋅$ $sin(60)$ term must have a minus sign.

Not the answer you're looking for? Browse other questions tagged homework-and-exercises newtonian-mechanics forces mass spring or ask your own question.

2
Dynamics of a Vertical Mass-Spring Simple Harmonic Oscillator with Gravity
10
What will be different if the spring is not massless?
11
Understanding transverse oscillation in 1 mass, 2 spring systems
14
Deceptively simple mass-spring problem?
1
How does splitting a spring result in a higher maximum velocity?
8
Experimental Result Cannot Be Explained by Theory for 2 Spring 1 Mass System
0
Why does conservation of energy give a wrong result?