If light travels as a wave rather than a straight line there should be a width limit for it to travel and penetrate matter - like a hight limit for automobils in roads due to bridges - My question is1.How to calculate this specific width ! 2. Can you use this formula to calculate the filtration percent of a sheet (on a beam of light passing through the sheet)? Tnx!

It seems you misinterpreted the wave nature of light.

It doesn't say that light follows a wavy path. Instead, light travels in a straight line, and it is the magnetic and electric fields that oscillate.

If you'd focus on one specific point in space, it would seem as if the magnetic and electric fields are getting stronger and weaker, and repeat in the other direction. Plotting the field strength and direction over time would result in a $sin$-curve for each field component. The same result you'd get if you froze the light wave and plotted the field strength and direction with respect to the position. 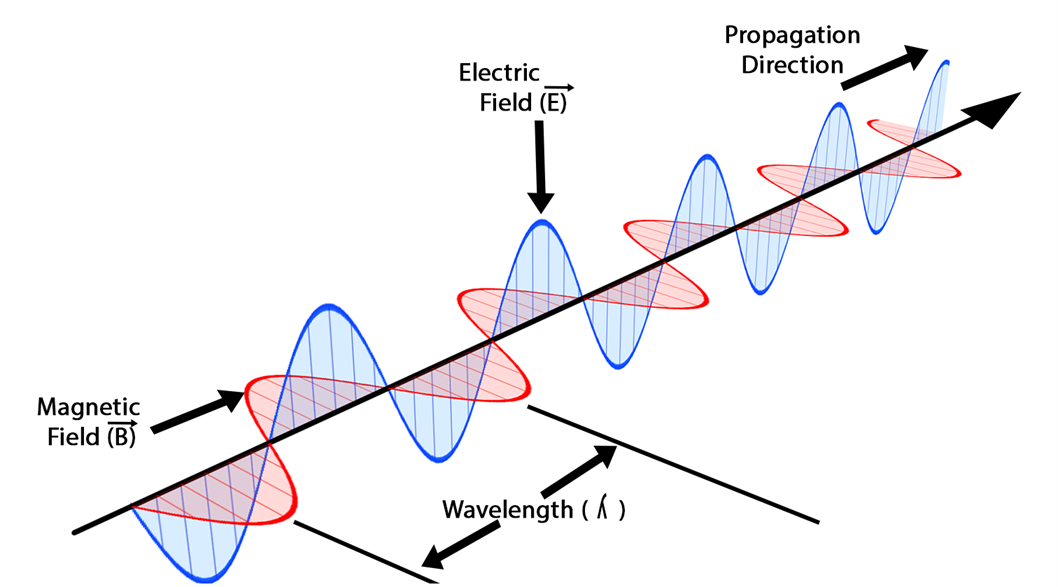 So, each part of the EM wave does in fact wave, but what about the whole light wave? For this we can calculate the Poynting vector, which tells us the energy flow: $$\vec S = \vec E \times \vec H$$

For a plane wave, we have the following expressions for $E$ and $H$ with propagation in $z$-direction:

where $Z_0$ is the impedance of free space ($377~\Omega$), which tells us the ratio of magnetic and electric field.

From the above formula we can see that the direction of the energy flow will be completely perpendicular to $\vec E$ and $\vec H$, since the cross product ($\times$) of two vectors returns a vector perpendicular to both. The remaining term gives the strength of the energy flow, which now oscillates at twice the frequency and has an average value of $$\langle S \rangle = \frac{1}{2Z_0} |E_0|^2$$

But in fact a light wave doesn't "fit" through arbitrarily small holes (or "apertures"). Light falling on an edge is diffracted and doesn't throw a neat, clear shadow line on a screen behind it. Instead, we see a diffraction pattern, which varies in intensity.

The same happens when light travels though a hole. Light falling on the edge of the hole is diffracted, changing direction and interfering with waves from other parts of the aperture. The smaller the aperture is, the more significant this effect becomes.

There is a limit to how small an aperture can be, given by the Fraunhofer diffraction limit: $$\alpha = \frac{1.22 \lambda}{d}$$ where $\alpha$ is the angle of the first dark ring (constructive interference), $\lambda$ is the wavelength and $d$ the diameter of the aperture.

What if we have "more light"? An increase in intensity shows up as an increased amplitude of $E$ and $H$ fields. This in turn means that each spot on the screen is proportionally brighter if the amplitude of the incoming light wave is larger. However, the fraction of intensity on any given point to the total incoming intensity is determined only by the wavelength of the light and the aperture size - not the intensity/amplitude.

As you can see, the critical parameter that determines if light "fits through a hole" is the wavelength $\lambda$ and not the amplitude $E, H$ of the wave.

Not the answer you're looking for? Browse other questions tagged waves electromagnetic-radiation or ask your own question.