Rubber bands expand when chilled and contract when heated (no stretching, just when heated/chilled and at rest) to my knowledge. Why are hot rubber bands able to be stretched longer than cold rubber bands when acted upon by the same force? For example, a hot rubber band will stretch 10 cm when a weight it pulling it down, but a cold rubber band will stretch 5 cm when the same weight is pulling it down. Is it because of entropy? Or potential energy? Is it Hooke's Law, where K-constant decreases if temperature increases? 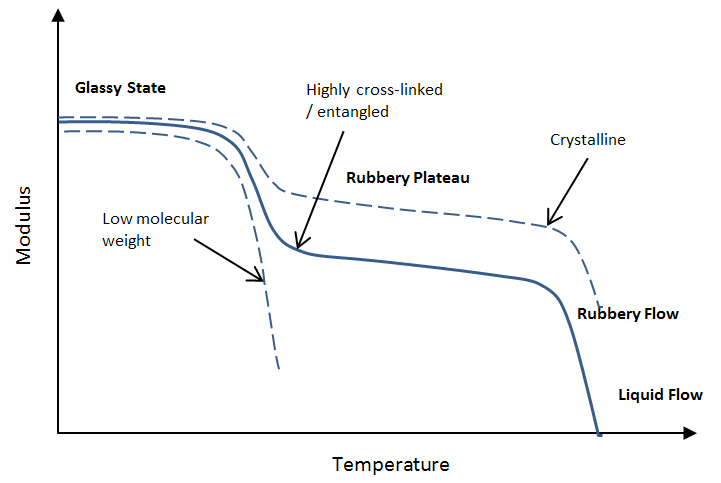 In polymers, the origin is the melting of weak bonds between the chains. However, exceptions can exist; for example, the stiffness of a purely entropic system increases with temperature, so once melting is complete, we might see an increase in the elastic modulus with heating: 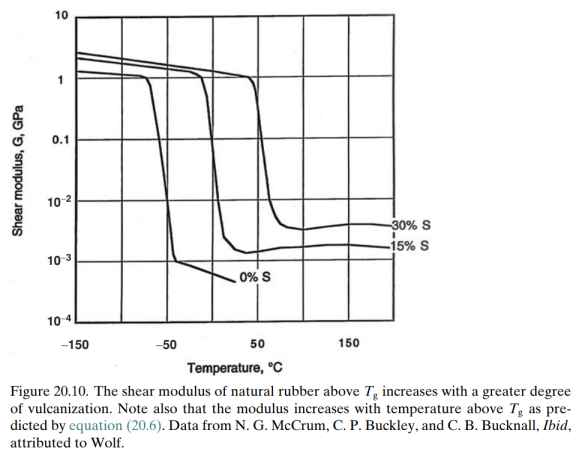 Therefore, if you hang a weight on a rubber band (to achieve a change in length of $\Delta L$) and heat it up, the weight will probably rise because of (1). If you then remove the weight at the same higher temperature, the rubber band may contract by more or less than $\Delta L$ as mediated by the mechanisms discussed in (2). If you then cool the system down to the original temperature, the rubber band will return to its original length, $\Delta L$ above the original position of the weight, if it is not already there and if the entire loading time was short enough that irreversible flow was negligible.

Put another way, since you're asking about elasticity in the context of a hot and a cold rubber band loaded by the same weight, I should emphasize that one can't directly measure a system's stiffness by keeping the force constant and observing the displacement when changing other things. One measures the stiffness by changing the force while watching the displacement (or vice versa) while keeping other things constant.

The elastic modulus of materials decreases with temperature.

Not the answer you're looking for? Browse other questions tagged thermodynamics entropy elasticity or ask your own question.

1
Why do the tyres of the vehicles burst during summer?

4
Rubber Band Forces
21
Why does heat added to a system at a lower temperature cause higher entropy increase?
1
Where do I thermodynamically see the energy and entropy of a ball bouncing on the ground until it stops?
3
Ball Rolling Along an Elastic Track
0
Calculating the entropy. Where are the borders of a heat engine? (Feynman Lectures)
4
Potential energy in stretched vs unstretched rubber bands
0
Is my interpretation of how a Carnot Cycle works correct?
0
Why do rubber bands at higher temperatures stretch more?