Is there a difference in the infrared absorption spectrum of a greenhouse gas when pure and when mixed with non-greenhouse gases?

According to the standard IPCC greenhouse climate change hypothesis a doubling of the preindustrial CO2 concentration of 285 ppm in the atmosphere - the current value is 405 ppm - would lead to an increase in backradiation or radiative forcing of 3.7 W/m2 (An earlier claim was 4.3 W/m2). Using the Stefan-Boltzmann Law this translates into a temperature increase of about 0.7 °C (The IPCC actually claims 1 °C, for a discussion see here). The IPCC also claims that there are feedback mechanisms that amplify that initial temperature increase further by a factor of 1.5 - 4, but that does not need to concern us in this context.

To check this, a chemist, Dr. Heinz Hug, did the following simple experiment (The Climate Catastrophe - A Spectroscopic Artifact?): He first measured the infrared absorption spectrum of an air sample with a CO2 concentration of 357 ppm (the value of 1993); then he took another one with an air sample with double that concentration. The result of a comparison between the two spectra gave an absorption increase of 0.17%, equivalent to an increase in radiative forcing of 0.054 W/m2 - about 1/70th of the IPCC value. This would result in a temperature increase of only about 0.015°C.

What could be the reason for this massive discrepancy? Since the 'climate change' radiative models are based on highly questionable assumptions, there is no lack of possible starting points. One of them is the fact that the models are based on IR absorption spectra generated from pure greenhouse gases. In the real world, of course, the bulk of the atmosphere consists of a gas mixture mostly of non-greenhouse gases. It is simply assumed that the IR absorption characteristic of a greenhouse gas will not change with other types of gases present.

To check whether this assumption really holds true, Dr. Hug carried out another experiment where he did an infrared absorption spectrum comparison (Hug & Barrett versus IPCC) between pure CO2, CO2 mixed with Helium and CO2 mixed with Nitrogen. In all three cases the number of absorbing CO2 molecules, temperature and overall pressure were identical (The last point is particularly important, since an increase in gas pressure leads to a corresponding increase in absorption by widening of the IR absorbing band, an effect called pressure or collisional broadening). The result was that the absorption in the CO2 mixed with Helium was significantly higher than in the pure CO2 and even more so in the mixture with Nitrogen.

These results, if correct, have farreaching consequences. In particular, it means that the CO2 absorption band is far more saturated than assumed by the IPCC, with accordingly less potential for an absorption increase in case of a higher CO2 concentration.

However, IPCC connected scientists when confronted with the results of Dr. Hug insisted that it does not make any difference to the infrared absorption whether the greenhouse gas is pure or mixed with non-greenhouse gases and that the measurements by Dr. Hug must be faulty. Below is a diagram shown by them (From this paper: Pressure Broadening in the Infra-Red and Optical Collision Diameters) to refute the measurements made by Dr. Hug. It shows the IR absorption of methane rising with the partial pressure of the “foreign gas” like Helium or Nitrogen (The scale seems to be in Torr, so from about 0-1 bar). The partial pressure of the Methane is presumably held constant, which means that the pressure of the whole gas mixture will rise.

It is not clear why this is supposed to be a refutation of the work of Dr. Hug. That there is an increase of absorption because of the rising pressure of course in no way precludes that there are other effects participating. That it is not possible to disentangle the pressure broadening non-empirically is made clear in the abstract of the paper: "From the results obtained, it is clear that the pressure broadening effects of certain gases on one absorber cannot be reliably extrapolated to predict the effects on another absorber. Also the effects at one wave-length are not in general the same at another wave-length for the same absorber." What the diagram shows nicely is that, as measured by Dr. Hug, the absorption is different for different “foreign gases” at identical pressure.

Furthermore, pressure broadening does not so much increase absorption as it spreads it out, diminishing the peaks while increasing the sidebands. Since the measurement in the above diagram was done only at the peak, it is very likely that the effects of the increased pressure actually diminish the observed rise in absorption! 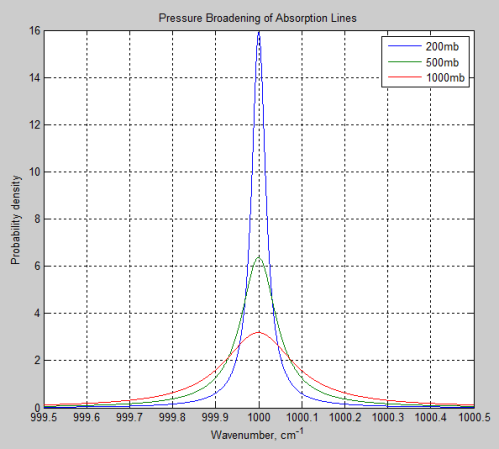 As far as I understand it, it makes perfect sense that a greenhouse gas would have a higher absorption rate when mixed with non-greenhouse gases: A single CO2 molecule will absorb a photon and then, after a certain time span reemit it. In a gas consisting of many CO2 molecules a single molecule will collide with other molecules; the average time between these collisions is, at least under the conditions of the lower atmosphere, much shorter than the average time between absorption and reemittance. When an excited molecule hits another one, this may lead to a conversion of the rotational/vibrational energy into translatorial energy and the molecule will move faster, i.e. thermalization occurs and the gas will get warmer (If we define temperature solely by the translational movements). This of course happens in the other direction too, i.e. a molecule may get excited when hit by another one, so there will be the same level of emission as there is of absorption according to Kirchhoffs law once an equilibrium has been reached.

But I am not an expert and Dr. Hug might really have botched his measurements. So, the question is this: Is there a difference in the infrared absorption spectrum of a greenhouse gas when pure and when mixed with non-greenhouse gases?

"Intuitively, one expects absorption to be proportional to the number of absorber molecules in the light path, not to mole fraction (Ball, 1987). But when the data from Figure 1b are replotted in Figure 3 as a function of mole density, it is clear that a single functional relationship still does not exist."

"5. Infrared CO2 analyzers should be calibrated in terms of mole fraction, not partial pressure or mole density. This is surprising."

Mole fraction: Mole number of CO2 divided through Mole number of the entire air mixture. So, the "surprising" fact is, that the CO2 is not sufficient, the non-absorbing gas constitutents are also needed to explain the absorption behaviour, even after eliminating the influence of pressure.

I received the measurements from Heinz Hug in 2007

So the obvious conclusion is that the bandwidth of Hug sits completely in the saturated part of the co2 spectrum, so that the co2 doubling effects cannot be accurately measured.

Not the answer you're looking for? Browse other questions tagged thermodynamics thermal-radiation atmospheric-science spectroscopy climate-science or ask your own question.

3
How is temperature related to quantum vibrational states of molecules?

12
Why is radiative forcing from CO2 logarithimic and not a decreasing exponential?
10
Do gases reflect some IR radiation?
105
Explain it to me like I'm a physics grad: Greenhouse Effect
3
How is temperature related to quantum vibrational states of molecules?
2
How can atmospheric $CO_2$ absorption of infrared be 100% when its atmospheric concentration is 0.04%?
6
Shouldn't $CO_2$ forcing depend on the surface temperature?
2
Why do CO₂ and other greenhouse gases interact with infrared radiation but not ultraviolet wavelengths?
3
How Does a Moderately Hot Gas Emit Radiation?