An ageing gent says he does not accept this statement:

I know no more about why he rejects this statement - maybe it is that water vapour alone would do the job. The gent in question has a first class degree and a doctorate in physics.

Is there a debate within the physics community over this or am I misunderstanding?

This is a rather more simplistic argument than Anna's, but it might make an impression on your friend.

The Earth and the Moon receive the same amount of energy (per square metre) from the Sun, but the average temperature of the Moon about -35C. So it's pretty obvious that the atmosphere of the Earth raises its temperature 50 or so degrees. I suppose you could argue about whether this is a greenhouse effect or not, but whatever the exact details it's obviously due to the atmosphere.

It is indisputable that greenhouse gases keep the world habitable, there can be no controversy about that. The term "green house" is disputed as a misnomer, but everybody agrees that it is a misnomer, and uses the term by convention. Real green houses work by prohibiting convection, whereas the atmospheric green house effect is a matter of heat retention through various atmospheric mechanisms, mainly by delaying the radiation of infrared energy back into space. Your friend might be talking about this as a disagreement.

The main greenhouse gas in the atmosphere is H2O ( water). There is a debate in the climatologists community, about the contribution to the "green house effect" of CO2, not of H2O, and of how much the anthropogenic CO2 (i.e. due to the burning fossil fuels by humans) increases it.

Here are the greenhouse gases in the atmosphere

Most of them are naturally occurring and the main component is water vapor.

There are two camps, the skeptics and the alarmists. The mainline climatologists, the ones who have the ear of the media and the politicians, support the proposition that the human contribution to CO2 will increase the temperature disproportionately by the end of the century, as does the UN with its IPCC reports, trying to control fossil fuels worldwide.

Physicists, when they look into it, also take sides as do most of scientifically inclined people. The media have been brainwashed into the carbon footprint and carbon tax mentality which the politicians love ( the more taxes the better).

Most skeptical scientists accept the contribution of CO2 to the green house effect. They do not accept that the feedback mechanism used in the General Circulation Models which predict an alarming warming is correct. There are plenty of data that falsify the alarming predictions of these models and this is what your friend must be talking about.

Here is a plot of predictions of the GCM models for the average world temperature anomaly, and here are the data GISS, and RSS. 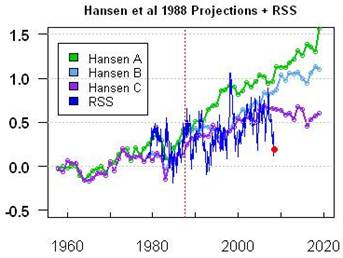 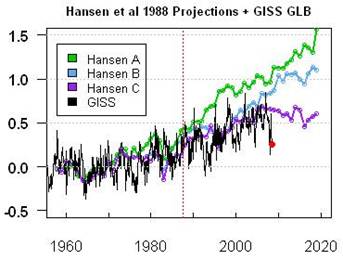 One can clearly see that the data are even lower than the most conservative model predictions.

One can discuss for long on the controversy but there are many blogs that cater to both sides of it.

Not the answer you're looking for? Browse other questions tagged climate-science or ask your own question.