So I was reading about Einstein's thought experiment where he tries to show that simultaneous events in one frame may not be simultaneous in another frame. 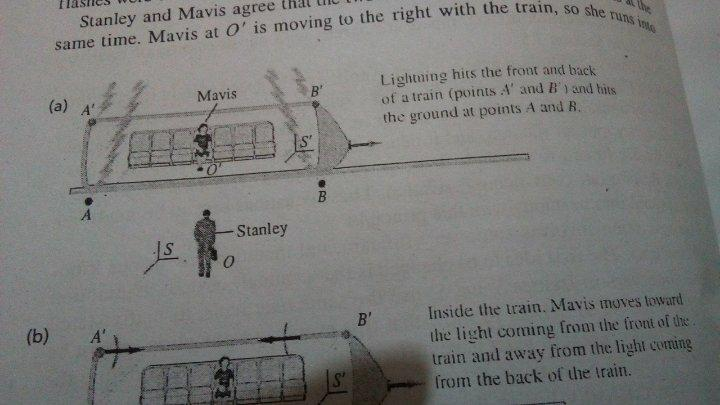 So, in the given pic, light from B' reaches Mavis before light from A' and I get that because she is moving to the right. But what if Mavis had another way to check whether the lightning hits the two ends simultaneously or not? What if I have two clocks attached at the ends A' and B' and the two clocks are synchronized. Attached to the ends A' and B' are devices that record the time when the lightning hits them. So if the lightning hits both A' and B' simultaneously with respect to Stanley, then by looking at the recorded times from A' and B', can't Mavis also come to the same conclusion?

The speed of light is constant for all observers, so if Stanley sees lightning reach A’ and B’ simultaneously, then Mavis must see it reach B’ first, as you said. The diagram shows that this occurs, from Stanley’s perspective, because Mavis is moving to the right and the light from B’ reaches her before the light at A’. Of course, she thinks that the speed of light from both sources relative to her is identical, so she must conclude that lightning struck B’ earlier since the light from this event reached her first. This thought experiment shows that Mavis must observe a time difference, so if Stanley records the strikes using synchronized clocks, Mavis will see them as non-synchronized. This is the only way to preserve her view of events. The thought experiment of Stanley using synchronized clocks actually demonstrates that, in relativity, spatially separated clocks which are synchronized in one frame of reference may not be synchronized in another. This can be seen in the Lorentz transformation for time: If two observers moving relative to one another, A and B, start at the same position with initially synchronized clocks, and observer A later records time $t$ at position $x$, observer B moving relative at velocity $v$ in the $x$-direction will record time $t'=\gamma\big(t-\frac{vx}{c^2}\big)$, where $\gamma = \frac{1}{\sqrt{1 - \frac{v^2}{c^2}}}$. The change in recorded time in this formula depends on position, which demonstrates how two distant clocks may appear synchronous in one frame of reference but not another.

When you say that if Mavis synchronised her clocks she should reach the same conclusion you are actually trying to think in terms of absolute time. Absolute time means that time is ticking the same way for all observers and its just that she is moving and so she is getting the wrong information. Surely if there were two clocks at both ends of the train cart and if Sanley sees lightnings as at the same time then so should these watches. But what is a watch? Its just some sort of a machine that generates events that we all agree last always the same..we call these events ticks of the clock if you want.So for something to be a clock it has to repeat, it has to have some sort of regular repetition of events. Let us first agree what do we mean by simultaneous events. Without the clocks because clocks can be flawed. So, if for example, you are in betwen two guys firing a guns at each other, and you are in the middle, then you can say that they fired at the same time if both bullets reach the middle at the same time, that is, reach you at the same time. So, imagine now that you are moving towards one of them at some speed v and you know that the speed of the bullet is w. Now, you reach the first bullet, you meet that bullet, and some time after this, the other bullet reaches you, of course, only if w greater than v. Now, you can measure the speed of the bullets and then say aha, if i am moving at this speed or that then this bullet was shot some time ago etc from a stationary or moving frame or whatever...and all of this you can say because you know what is the speed of the bullet, you know what is your speed, and you measure the speed of the bullet as seen from your frame. Know this speed is different than w of course. It could be that for one bullet it is v+w and for the other its w-v...or something else...But with light, if you measure it to be c in one frame you measure it to be c in some other frame. So for light you can not use speed adition to reach the same conclusions as for the bullets. So if the speed of light is c (and it is) and if it hits the end and the front of the cart, and reaches you that is the middle of the cart at different times then there is no other conclusion but that this happend at different times. If there were in deed clocks overthere and if the lightnings hit them and they stop working, would they stop at different times? Yes, they would.But how can this be? The guy seeing all of this from his perspective must see it happen at the same time! He also must see it hit the train, or else it would be hard to explain the markings on the train. And yes, he does see it hit the train. But what does the man on the train see? He sees lightnings at different times and why would he be wrong? There is no prefered frame of reference here. So, still, how can we explain the clocks? Surely, then, the guy outside must see the clocks to be out of sync! And yes, he does see them that way. If you carefully derive the formula you see that the clocks must be out of sync by some amount that is proportional to the lenght of the train cart, that is to the amount of their space separation.. And yes, experiments confirm this. This might be unsatisfactory because you could still say but HOW? You must see and understand the fact that these two reference frames are equal and that if someone measures something in one frame, and someone else in some other frame, we can not just dismiss one of them as "wrong" because, we can not even tell who is moving and who is statinary. So this is compelling. And in agreement with experiment, i say one more time.

Stanley doesn't know about A' and B'. In his world, there is A and B. What does it mean for Stanley to "see the strike occur at A' and B' simultaneously?" If it mean he can read Mavis's clocks and he sees that they read the same time (let's say $t=0$) when they are struck, then he sees the following:

Stanley concludes that the rear flash occurred first, and the spatial separation between the 2 flashes was greater than the length of train car.