I hope the question is suitable for this forum....

Watching Star Trek: The Next Generation, I have found at least a couple cases where a navigation malfunction on a shuttle makes it fall towards the nearby planet in cuestion of minutes (note that the ship is just passing by, not getting out of the planet).

I'm not an expert physicist, but judging by the way we move our probes through the solar system and that even asteroids just pass near earth without blinking I understand that you have to spiral around the planet for some time before entering it and crashing on its surface... even the Tiangong-1 chinese station took a long time to fall.

I know the situation is created in the sake of drama but I wonder about the possibilities for a shuttle to get captured by a planet's gravity and be forced to crash almost instantly, making useless every rescue effort.

Any of you could enlighten me?

Judging by the episodes of Star Trek I've seen, the crews of the Enterprise and other ships prefer to hover above a planet instead of orbiting. That is, they park the ship so that it remains unmoving above the planet, requiring engine power to keep the ship from falling to the surface due to gravity. In this situation, a navigation malfunction that shuts off the engines would result in the ship falling down to the planet.

The ships could save a lot of fuel if they parked with enough sideways velocity to orbit the planet like a space station or moon. Then they would only need to expend a little fuel to counteract atmospheric drag if they were sufficiently close to the planet (see the orbit corrections on the International Space Station).

I'm not an expert in orbital mechanics neither in aerospace flights, but I'll try my best. In the ideal scenario, where drag forces are absent, the ship's trajectory around a planet may be an elipse, a parabola or a hyperbola. Take for instance the following image that depicts the kinds of trajectories a ship under gravitational influence of a body located at point $F$ may take (taken from Wikipedia) 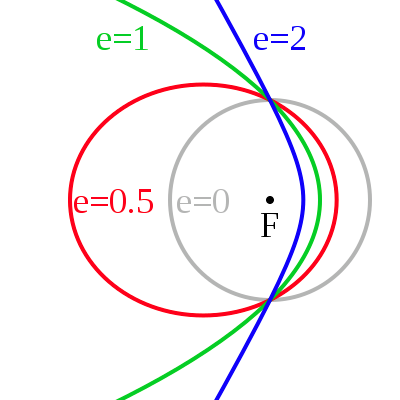 A "pass-by" trajectory can either be like the green or the blue one, and a closed orbit can either be the red or the gray one. If the smallest distance between the point $F$ and one of the trajectories is smaller than the planet's radius, the ship will obviously hit the surface. So if the ship's crew wants to avoid this tragic fate they must adjust their trajectory to one that passes further away from the planet.

Now if we take drag forces into consideration, the crew should also avoid entering the planet's atmosphere (with this I mean the "thick" layers of the atmosphere). Depending on how deep they penetrate and how fast they're travelling the atmospheric drag forces can rip apart the entire ship (even if their altitude is tens of kilometers away from the surface!). But even if they avoid being burned alive the atmosphere may still have slowed the ship down to a point it'll inevitably hit the ground. So the "safest approach distance" must be such that the atmosphere is "thin enough" to not break the ship apart and neither change the trajectory to a collision one.

Not the answer you're looking for? Browse other questions tagged newtonian-gravity angular-momentum orbital-motion satellites or ask your own question.

13
Two planets in same orbit - not planets?
2
Angular speed of the planets
4
Why are large planets away from the Sun and smaller planets near the Sun?
3
Why are star systems flat but planets are spherical?