Ambiguous curl for a vector field 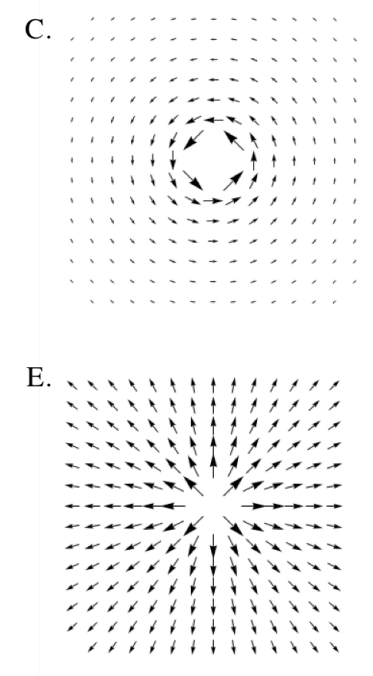 For C, however, I am not sure how to justify its ambiguous curl. My lecturer wrote that

I suspect that these two things have something to with the motivation for Gauss's Law and Ampere's Law, as the singularities sound like whether there is the presence of a charge or current density. Anyway, I don't see how "If the magnitude were changing with distance like $1/s$, then any line integral around a closed loop will be zero unless it encloses the origin." justifies the ambiguity. I see how it does for divergence, but not for curl, as I don't think my justification works as the radial component doesn't work that way. Given if my justification for why E's divergence is ambiguous, why is C's curl ambiguous?

Take a counterclockwise loop between $\theta_a, \theta_b$ and $r_a,r_b$ where $r_b>r_a$. The circulation is the magnetic field at constant $r_b$ minus the side at constant $r_a$ times their respective lengths (the constant $\theta$ sides are perpendicular to the flow so vanish).

If $B(r)=B_0/r$ then the circulation and thus the curl vanishes (we are free to take a limit as the size of the loop goes to zero), like your lecturer said. Moreover, if for instance $B(r)=B_0/r^2$ then you have a negative curl everywhere except the origin.

Here is a example of the kind of loop I am talking about. Since $B$ is pointing in the $\theta$ direction the line integral over the left and right side vanishes, and over the top and bottom sides it is just the value of the $B$ field times the length of the curve. 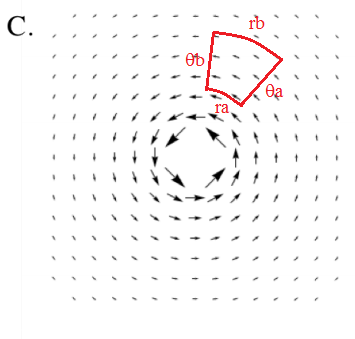 Not the answer you're looking for? Browse other questions tagged homework-and-exercises differential-geometry differentiation vector-fields or ask your own question.