Is one side of earth faster at night and slower at daytime?

I'm reading Physics for Entertainment by Yakov Perelman and in it he says under "When we move around the sun faster" that at midnight the speed of the rotation of the earth is added to that of earth's translation effectively saying we move faster at night than during the day.

Does this happen because the gravity of the sun? Is this just a phenomenon of any object, like a wheel (I heard someone explain it on a quora but I wasn't sure if it was related)?

Anyways I don't understand please explain in easy way for me or tell me what to study so I understand it.

A excerpt of the book: 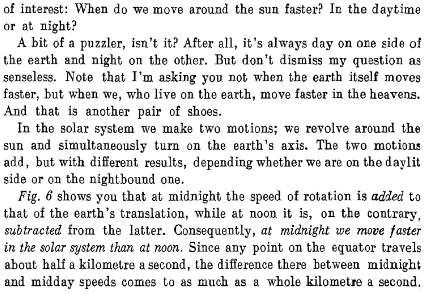 The wheel is indeed a great analogy for this. Imagine a single wheel with centre O that rolls along the ground. Take two opposite points on the wheel (on the top and on the bottom) and call them T and P respectively.

In (b), when the wheel is purely moving forwards (translating) at velocity +v, it follows that all points of the wheel have velocity +v too.

Therefore, as (c) is a wheel both rotating and moving forwards at the same velocity (v), it is a combination of the processes occurring in both (a) and (b). It is where at any given moment, P (in contact with the ground) will have an instantaneous velocity of zero (since it is both rotating at -v and translating at +v, which cancels out to 0). Therefore

Point O travels forward at velocity +v, since it is not rotating, but purely translating.

Finally, point T, however, is not only rotating forward at velocity +v, but it is also translating forwards at +v too. v + v = 2v, so at any given instant T has a velocity of +2v. Therefore 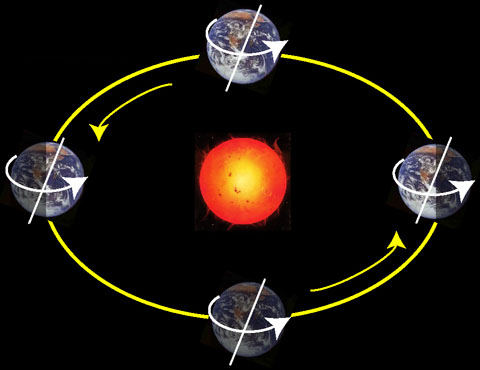 Therefore, in the same way, the outer side of the Earth (facing away from the Sun) would travel faster than the inner side (facing towards the Sun.)

It is quite something to realise that at night time we are actually flying across the solar system at twice the speed as our daytime counterparts.

Great question, and hope this helps!

The surface of the Earth is undergoing two different motions simultaneously. The whole planet is revolving around the sun, and the planet is also rotating. At midnight, these two motions are in the same direction; at noon, they are in opposite directions, and at other times, the two directions are oblique. At night, the smaller rotational velocity adds to the net speed, while during the day it subtracts.

5
Why is mechanical waves faster in denser medium while EM waves slower?
4
The Earth is spinning, so why don't we jump and land on a different location?
0
How bright would the Earth be at night without the moon?
117
If all motion is relative, how does light have a finite speed?
2
If the earth is spinning and we are spinning with the earth, why doesn't it take longer to go opposite the rotation?
36
Why does the Earth cool at night time?
0
Is gravitation on earth less in nighttime than in daytime?
6
"Earth spinning faster will break GPS and atomic clocks".. Umm, how?