Did diffraction bend this light more than 90 degrees?

Earlier I asked whether diffraction could bend light more than 90 degrees. 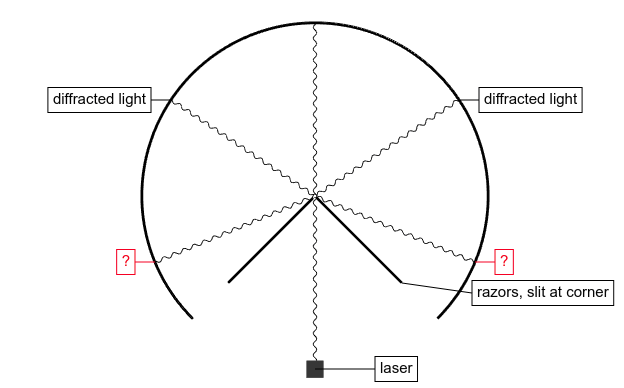 Lambda gave me an answer. He stuck a razor blade into a piece of wood, and he shone a green laser at it, and he photographed the green light shining from the razor blade at an acute angle. It had to have bent more than ninety degrees. 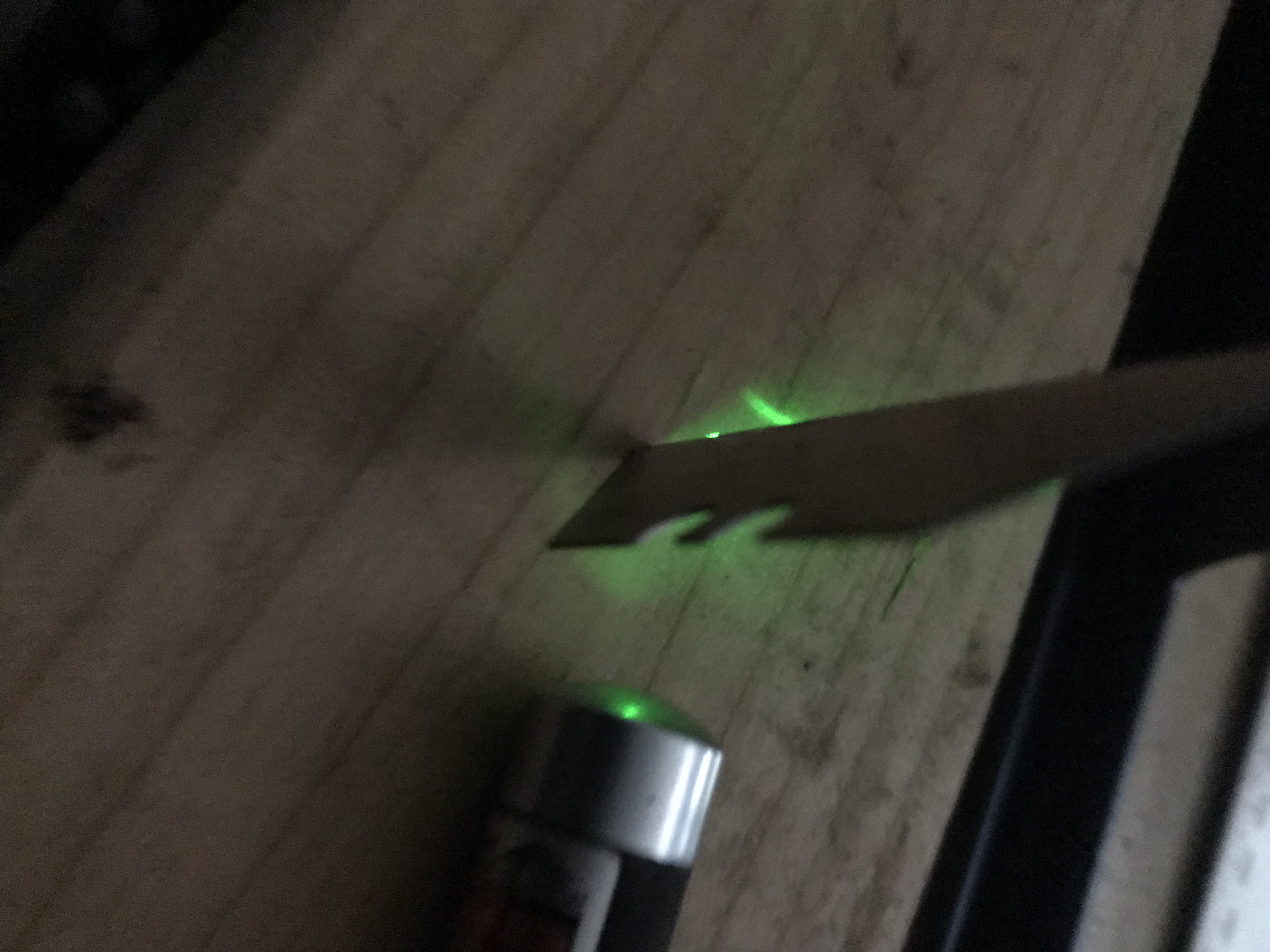 This is the picture he posted. There is a small glowing green dot on the back side of the razorblade, seen from behind and above. This light has somehow looped around the edge of the blade.

I tried it myself. I got a cheap laser from Petco, and used a c-clamp to keep it turned on and to provide a steady stand for it. I stuck a single-edge razor blade into a piece of wood, turned it so it was 45 degrees, and aimed the laser at it so that about half of the laser light was blocked by the razor blade. When I looked at the razor blade from an angle more than 90 degrees, it shone red at the spot the laser hit it.

My laser or my camera (one or the other or both) weren't good enough to photograph it, but I could see it clearly. I could see the red dots on the razor blade when my head was at extreme angles and also up and down out from various skew angles. I could see them from at least 270 degrees, the light I saw was clearly going rather much backward.

When I put the razor blade at a distance, it looked like there were two bright spots at the edges of the laser beam, right where it seemed to go from bright to dark. When the distance from the laser was shorter, it looked more like four bright spots. That might be because my cheap laser has a dim second beam that makes a circle of light offcenter. Maybe it shows up when it's close, and gets either dim or off at some angle from a bigger distance.But when I rotated the laser 90 degrees (which would change its polarization, assuming it's polarized), then it looked like there were a lot of bright spots. I'm not sure. It might be something about how the razor is honed.

I tried putting two razor blades into the wood, at right angles with a small distance between the blades at the bottom and with them touching at the top. When I aimed the laser just right near the very top edge I could see a diffraction pattern. So the laser is probably pretty much OK. I didn't play with that much because everything had to be lined up just right, and I wasn't sure whether the two shiny razors might do weird reflections and/or they might not be lined up just right which might cause a weird final reflection.

What Lambda showed is definitely real. I'm not sure how to explain it. Is it really diffraction? Could it be something about how razor blades are ground, that allows a special reflection? Or something else?

Here is the diffraction pattern expected if the razor blade is at 90 degrees to the light. 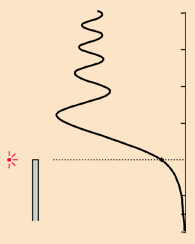 We get some light bleeding around the edge, and there could be some visible at 45 degrees, and maybe tiny amounts of light extending almost 90 degrees to the edge of the screen. Not very much.

With the razor blade itself at 45 degrees it's more like this: 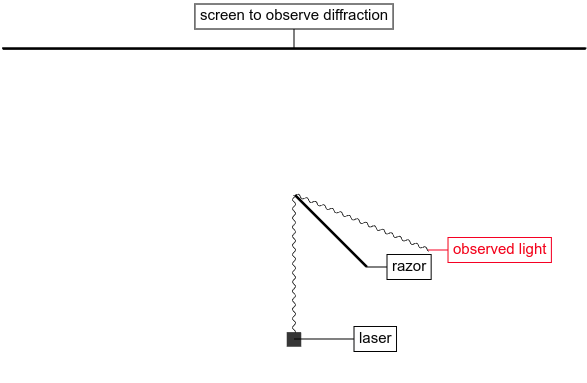 There is light that would not hit the screen at all. The simple descriptions of Fresnel diffraction do not discuss this possibility.

Is this diffraction or something else?

If it is diffraction, are there known formulas that say how much light to expect at extreme angles?

I'm very excited, but it might turn out to be something trivial.

From the diagram, I think you are making a point source geometry

I tried putting two razor blades into the wood, at right angles with a small distance between the blades at the bottom and with them touching at the top.

You are generating a coherent wavefront spherically symmetric, so it is not surprising it will go over 90 degrees.

I was thinking of the razor blade as a very thin straight edge. But real razor blades are not straight.

Here is a photo of one edge. It has peaks around 1 micrometer apart. A bit larger than one wavelength. 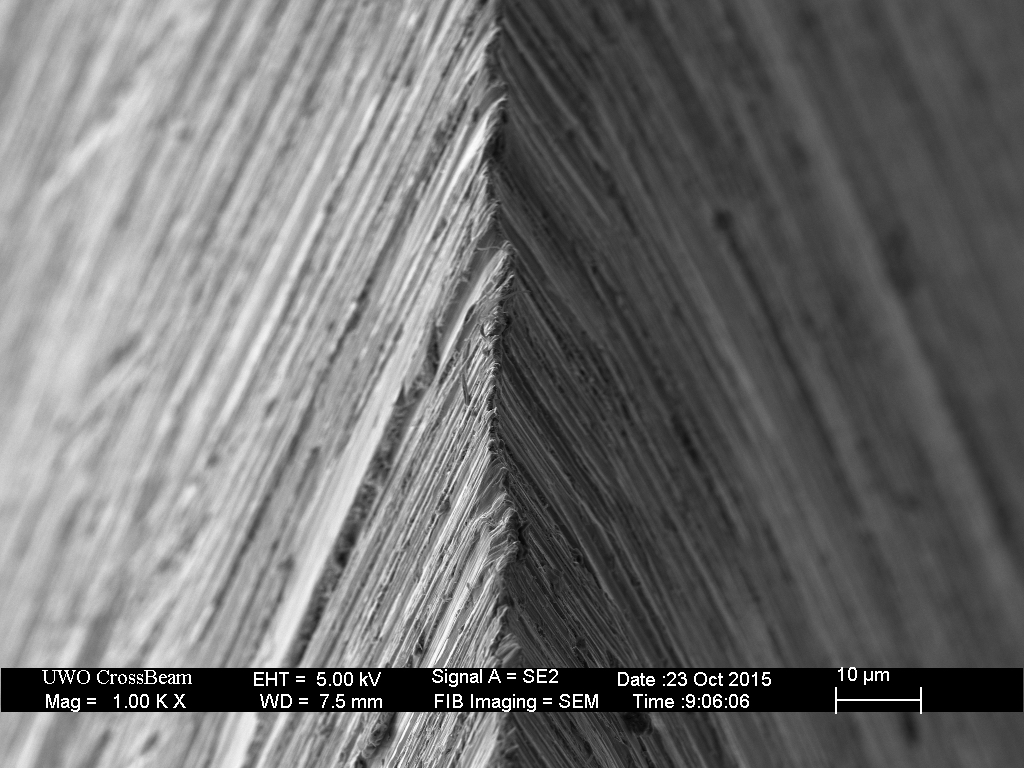 Some pictures of double-edge razors showed the striations at sub-micron distances. This is not necessarily quite how my razor blade works.

But suppose it is. If light that hits those peaks scatters at all angles rather than reflecting at the angle of incidence, that would get the result we see.

Possibly light that travels THROUGH those valleys is getting the single-slit treatment, or I guess there are thousands of slits. That doesn't explain it diffracting more than 90 degrees, but it could do things I wasn't expecting. 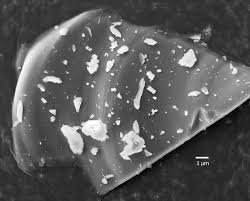 Not the answer you're looking for? Browse other questions tagged visible-light diffraction home-experiment or ask your own question.