Would it generate a lift if wind is circulating inside a nearly closed tube?

For a setup like the below image, would there be a lift generated to the tube, due to bernoulli effect? 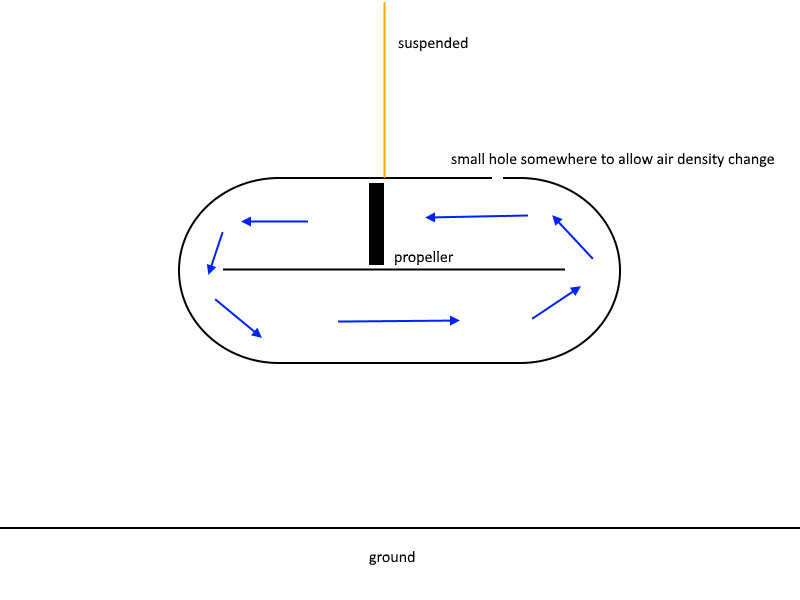 In both cases there will be a force due to the pressure imbalance, but it will not be sustained: it will only last as long as it takes to balance the pressures again. Moreover, due to the small size of the hole, this force will be rather small.

You'd obtain the same effect by pumping some air out of the tube before opening the hole at the top: as you can imagine, this is unlikely to lift the tube at all, and if it does it will not be for long.

I'm pretty sure it won't generate much lift. Unless there's something I missed.

You might get a small lift from Bernoulli force. Air rushing past the small hole will have reduced pressure, so air will rush in from outside. Air down means everything else up. Soon the air pressure inside will rise to the point that it balances the Bernoulli force. At that time the air inside will weight slightly more than the same volume of air outside, so the whole thing will be slightly heavier.

I can't see anything else affecting lift. What happens inside the cavity ought to mostly stay inside.

Not the answer you're looking for? Browse other questions tagged fluid-dynamics aerodynamics flow lift or ask your own question.

268
What really allows airplanes to fly?
17
How much effect does the Bernoulli effect have on lift?
11
Is Magnus effect a corollary of Bernoulli principle?
0
Angle of attack and lift: is there a model?
0
Sail propulsion (or wing lift) by wind deflection (without Bernoulli principle)?
5
Do helicopters and planes fly by different reasons?
1
Why do curved flows accelerate?
2
How do flat insect wings generate lift?