The equation for power dissipated is

This is, however, wrong. Any ideas as to why?

You aren't applying your power equation correctly. You can't just plug in any voltage, current, or resistance.

The equation $P=IV$ gives you the power delivered or dissipated by a single part of the circuit with a potential drop $V$ across it and current $I$ flowing through it.

If you want the total power dissipated in the circuit, you must apply this to each element separately. If just the outer resistance, then only consider this resistor. I will leave this to you.

Why do you substitute $R$ with 4? $R$ "is the resistance in the circuit", so it equals $2\Omega$, not $4\Omega$. There is another question though: do they need total dissipation or just dissipation in $R$?

Your answer looks right to me as long as you want the total power dissipated (including in the battery). 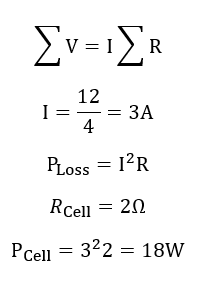 The question is a multiple choice and one of the answers state 'power dissipated in the battery is 18W'. This (C) is the correct answer as the total resistence in series is 4 ohms, the current through the load is 3A not 6A and the PD across the load is 6V.

Not the answer you're looking for? Browse other questions tagged homework-and-exercises electric-circuits electrical-resistance power batteries or ask your own question.