Why does the center of mass of car- Earth system changes with the car moving while no external forces acting?

Let's suppose that the humans in world are distributed symmetrical so that the centre of mass of earth lies at the very centre of earth. Now a giant car comes in with great speed that it moves down the earth's curvature very fast then you will see as its swirls around the centre of mass of the car-earth system is changing ( as the mass of the car is comparable to our earth) the centre of mass shifts .As the car moves the center of mass shifts being at the same radial distance from the centre of earth now if no external force is acting on the car earth system as a the as the normal force is provided by the earth then how does the central mass change its position without any external forces acting on earth? 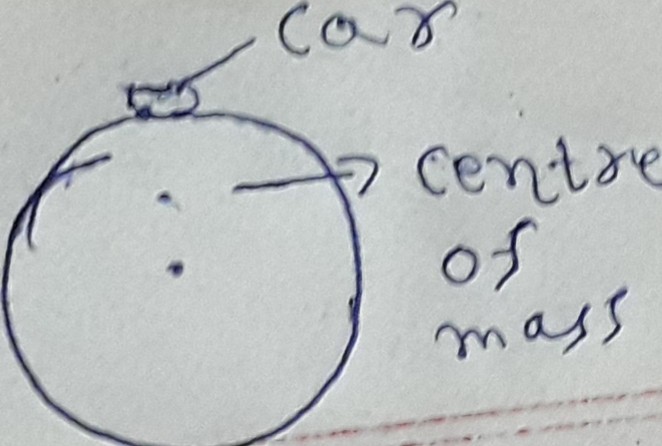 Let's model both the Earth and the car as two point particles which are linked by a straight line. Recall that the centre of mass depends on both body masses and not on their volumes; that is why I can model both as point particles.

Let's assume the car mass is sufficiently large so as to assert that the centre of mass of the car-Earth system is not located at the Earth's position.

If the car is under circular motion (either general or uniform) its velocity will not be constant, which means that there has to be acceleration. Such an acceleration is triggered by an external force: the friction (between the ground and the car's wheels; Otherwise the car would not move).

So the friction force makes the car turn around the Earth (together with the centripetal force, but I focused on the external force), what also makes that the centre of mass of the system to spin.

You can easily visualise the scenario: take a pencil and stick two balls on its extremes (such as paper balls). Mark a point on the centre of mass located on the pencil. Exert an external force on one of them (let's label it as red ball) while having the other stationary (it is our origin; the blue ball). The friction force exerted by the ground on the red ball will make it move. Notice how the marked point on the pencil also moves.