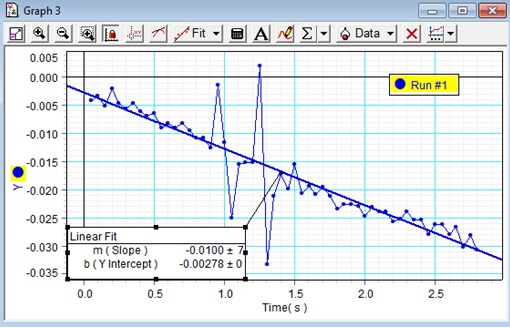 Hi there! I have a question about an experiment that was conducted. It is related to momentum.

2 carts were put on a track on opposite sides. They were then propelled towards one another at approximately the same speed.Please note that on each end of each cart, there was placed a negative magnet, so as soon as they came close to each other, repulsion commenced.

Two sensors were set on a frequency of 20 Hz to record their motion. After collecting the data, the data for the difference in momentum was graphed through the equation m2v2 - m1v1. The group did this to calculate the approximate average frictional force of the system by producing a linear fit. The slope of this line proved to be the average friction of the system.

This was an extremely simple experiment and did not prove at all difficult.

However, there is one question I have been asking myself that is driving me crazy. I can't seem to find the answer (Please note that our instructor did not ask us for this).

Why are there spikes in the graph of Δp (change in momentum) very near the moment of collision (actually there is no "collision" because of the magnetic repulsion). Is it because the frequency was set only to 20Hz and thus since the instance of collision was so tiny, the sensors couldnt pick up data correctly? Is it because for the brief moment that the carts cease to move friction with the rail is static instead of kinetic and thus requires more force?

An answer would be greatly appreciated as this question has been driving me crazy.

You would expect the graph that you use to show a discontinuity at the time of the interaction equal to twice the impulse.

Not the answer you're looking for? Browse other questions tagged newtonian-mechanics momentum conservation-laws collision data-analysis or ask your own question.

1
Explain these graphs of rotation and velocity of pucks on air hockey board
4
Conservation of momentum in collision of two bodies
1
Confused about elasticity and collisions
1
Effects of firing shells on the Earth's angular momentum
0
Can momentum be conserved in a perfectly elastic collision?
0
Conservation of momentum 1-D problem: track is not level
3
Head-on collision between two neutrons
8
$n$-way elastic collisions of particles in 1D, for $n \ge 3$
0
Elastic Collisions - Equation not working?