Neutral buoyancy for cylinder/bladder in water

A 25 liter flexible plastic bladder consists of three parts: an air chamber located on top of the bladder, a large middle water chamber, and a lower weighted area that serves as a counterbalance and ballast found below the bladder. The bladder is cylindrical in shape and is designed to float on the surface of a swimming pool. The air chamber (holds 2.5 liters of air) keeps the bag floating at the surface, while the water chamber (holds up to 25 liters), remains below the surface of the water, as in the picture below. The counterbalance stabilizes the bladder and keeps it in a neutral buoyant position, as shown in the image below. 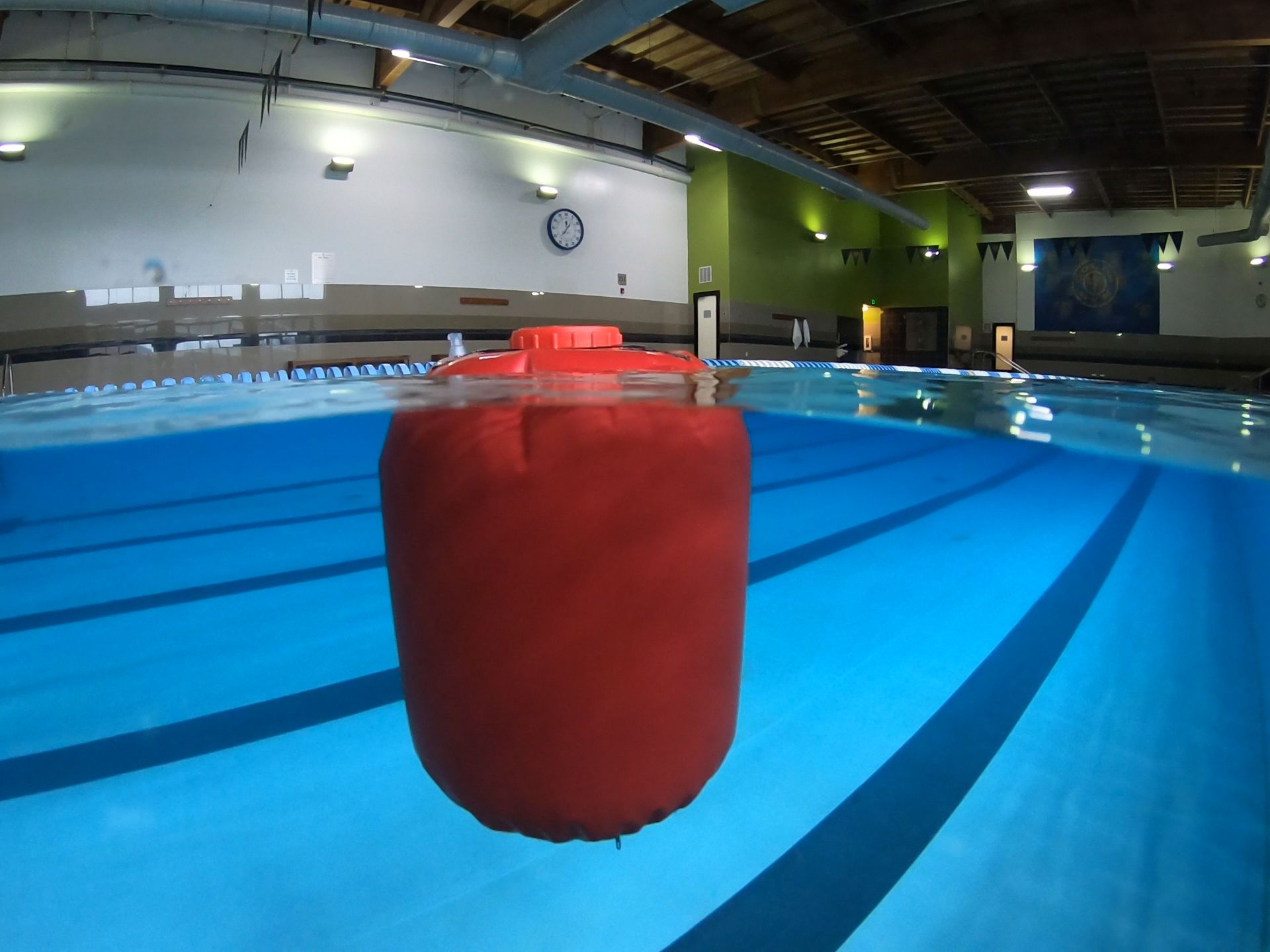 What I want is to determine the exact amount of weight needed to suspend the bladder in a neutrally buoyant position at the surface and at 20 cm below the surface. Is there a formula to determine neutral buoyancy?

I have put together a short video showing the bladder in a neutrally buoyant position on my website at: www.romaquatics.com/videos

Welcome to the Physics Stack Exchange.

Really there are four main material compartments you need to consider in trimming the net force to be zero:

I believe you've stated this, but assume the composite body and all the components that comprise it are radially symmetric and that the center of buoyancy is above the center of gravity - on the same central axis. In this case there are no moments and any net force is strictly in the up-down direction.

In a quasi-static condition (vertical velocity effectively zero) there are two main forces acting on the composite body: Body forces due to the mass of each compartment and gravity, and net pressure forces due to the property of hydrostatic pressure increasing with depth.

Since the compartment containing water has the same density as the surrounding fluid, the differences in density are zero, and so that compartment contributes zero force; we only need to consider the plastic, the counterbalance and the air.Summing these compartments to zero we have.

Now comes the tricky part. If the bladder were rigid, we would be done. The densities are fixed, the volume of the plastic bladder material is fixed, but we can adjust the relative volumes of the air, water, and possibly the counterbalance material (say if it's lead shot) such that the sum above nets to zero. And,

For the rigid bladder, no matter where you place it in the water column in its neutrally adjusted state, it will remain at that depth - assuming no currents in the pool.

But if you compensate by adding a little more volume for the air compartment at your 20 cm depth, you can achieve the static equilibrium, stable position.

But it's quasi-stable. A nudge up and the air expands causing it to move to the surface. A nudge down and the air compresses and the bladder sinks to the bottom. A saddle point stability.

Since your just looking for an estimated ratio to get you close from the jump, consider the volume of air in the bag, and the weight of volume of water it is displacing. Counterweight for the weight of the water displaced and fine tune it from there.

Not the answer you're looking for? Browse other questions tagged density fluid-statics buoyancy or ask your own question.