Why do two masses connected to each other by a spring have the same frequency of oscillation?

Why do two masses, connected to each other by a spring, and each connected to a wall by a spring, have the same frequencies of oscillation when perturbed? In solving for the motion of the masses, under and assumption of SHM for each, the displacement of each can be guessed as $Ae^{i(\omega t + \theta)}$, where each mass has a different amplitude, and they have the same frequency. That the frequencies are the same seems important, since the next step is to lay out the equations of motion so as to get a matrix multiplication like this,

where the top left and bottom right terms are identical. Then, finding the determinant to find a non-trivial solution, you can solve for $\omega$. This works because $\omega_1$ = $\omega_2$, or the equation would be difficult, and maybe impossible, to solve. You might get a solution for the product of the two but not for either. In the end, you get two $\omega$ values, one for a fast oscillation and one for a slow one; in one mode the masses move together, and in one they are half a phase apart. In both they have equal amplitude, and the motion of the masses, whatever is observed, is a combination of these two motions (I think this result is saying that they only motions the masses can undergo are those which are linear combinations of these two motions).

Visually, I am trying to picture the masses moving with different frequencies. I can picture it until I get to the region of spring which connects them, which could not move at both frequencies simultaneously. Is this disconnect in reality and picture why the frequencies are different? Or is it possible for the frequency of oscillation to vary along a spring?

In the end, you get two $\omega$ values, one for a fast oscillation and one for a slow one; in one mode the masses move together, and in one they are half a phase apart. In both they have equal amplitude, and the motion of the masses, whatever is observed, is a combination of these two motions.

The oscillations are called the modes of the system and to simplify things assume that all three springs are the same.

The slower oscillation $\omega_{\rm slow}$ looks like this with the two masses moving in phase with one another.

The faster oscillation $\omega_{\rm fast}$ looks like this with the two masses moving exactly $\pi$ out of phase with one another.

Any oscillation of the system can be described by a linear combination of these two modes.

On releasing the masses the motion of those two masses would look like this.

Here are a few frames from the gif file to show the complexity of the motion. 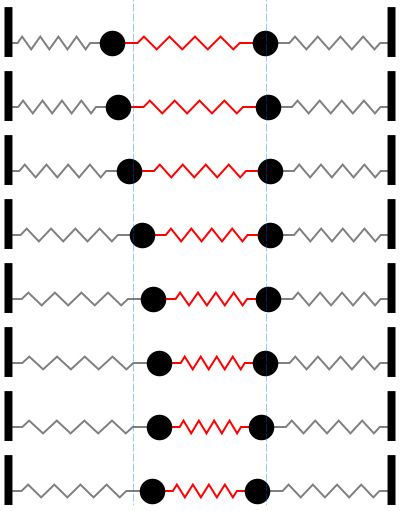 An analysis of the motion with an example which results is the following graph to show the motion of the two particles is done here. 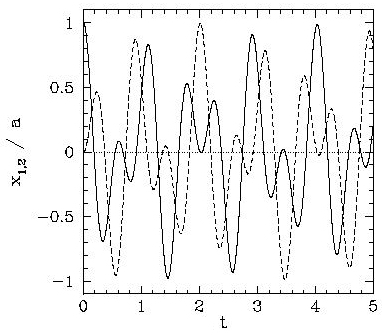 A VPython simulation is shown in this video.

The equations of motion are two coupled linear second order differential equations. Since the system is linear, any linear combination of solutions is still a solution, hence the set of solutions is a linear space.

It can be proved that the solutions of a system of $n$-th order linear differential equations is a linear space of dimension $n$. This means that if we can find $n$ specific, linearly independent solutions, then we can find any solution as a linear combination of those $n$ solutions.

Not the answer you're looking for? Browse other questions tagged newtonian-mechanics spring oscillators coupled-oscillators or ask your own question.

1
Eigenvalue equation for kinetic and potential energy
1
Can we let the lowest of n by equal (lenght and k) springs connected masses in equilibrium move in a siusoid way after giving the lowest a pull?