Consider an apparatus in which air is trapped in a small insulated container with an open bottom, and weighted with weights so that the air is slightly above neutral buoyancy.

This apparatus is placed in a closed bottle of water, shown below in State 1 with the floating apparatus. 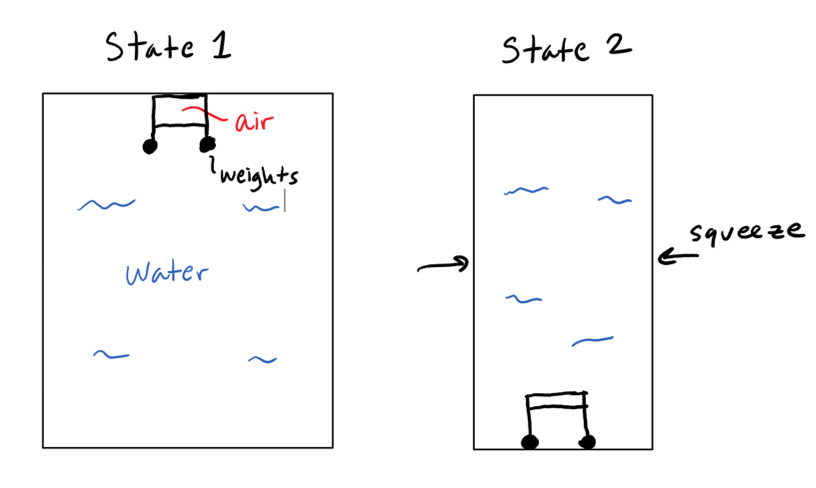 Now we slightly squeeze the bottle, thus causing hydrostatic compression of the air. The slightly buoyant State 1 air then sinks to the bottom, shown in State 2 above.

I've had some arguments about whether this process is reversible or not, and I think it depends on 2 cases:

This state of affairs can be analyzed without including entropy arguments, as follows.

Submarines deal with this problem all the time, in that if the sub is positively buoyant and is set to descend deeper under power, as it descends the pressure of the water outside the hull forces the hull to contract, decreasing its displacement and hence its buoyancy. So the deeper it get, the less buoyancy it possesses- and if it dives beyond the neutral buoyancy point, it will sink on its own even with its motors stopped. If unchecked, the sub continues down out of control until its hull gets crushed and implodes.

Alternatively, if a dived sub is trimmed into a neutral bouyancy state and then turns on its motors to drive to the surface, as it rises its hull expands, increasing its displacement and hence its buoyancy- leading to an ever-increasing rate of rise which persists even with its motors shut down. If unchecked, the sub rises faster and faster and will breach itself partway out of the water upon reaching the surface.

A dived sub must therefore be driven "hands-on" at all times, with both its net buoyancy adjusted on its way down and again on its way up, and the amount of lift its diving planes generate being similarly trimmed constantly by changing their angle of attack and the sub's speed through the water.

If the container is compressed vertically instead of horizontally, the hydrostatic pressure would be reduced allowing the vessel to rise again. Once it crossed the threshold required for the compressed air to return its buoyancy, even if the squeeze was released it should continue to rise as the gas expands.

Not the answer you're looking for? Browse other questions tagged thermodynamics fluid-dynamics entropy fluid-statics reversibility or ask your own question.

10
Is thermodynamic reversibility a function of path?
4
"Violation" of the Second Law
3
Can an adiabatic, isentropic transformation be irreversible?
1
Change in enthalpy equal to heat transferred
2
Neutral buoyancy for cylinder/bladder in water
0
Temperature of air coming out of a tyre due to a burst
0
Questions regarding quasi-static and reversible processes
1
More reversible heat required to do the same work as an irreversible process?
0
Is the buoyant force of air implicitly neglected for an object half-inmersed in water?