Are the masses of merging black holes correlated?

LIGO/VIRGO recently released data on observed "gravitational wave transients", mostly BH-BH mergers. The data includes a plot of the primary and secondary mass (the primary mass is defined as the larger one) of each observed event. There seems to be a clear correlation between these two quantities: 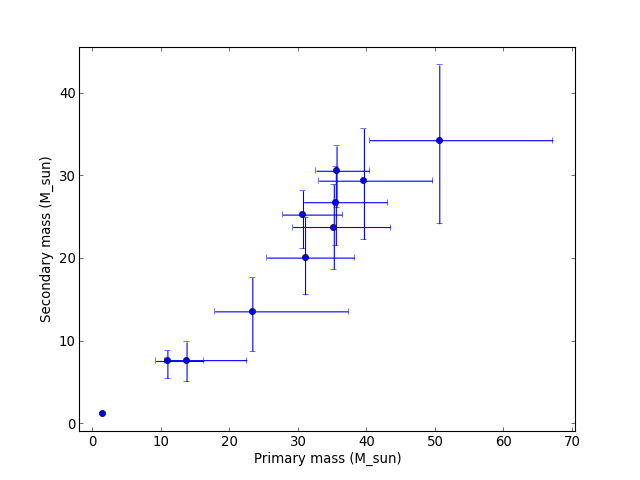 I'm wondering whether this comes from a bias in detection (i. e. mergers with similar masses are easier to detect, therefore we observe more) or if this is a correlation in actual compact binary mergers. In the latter case, is there any known explanation?

EDIT: A quick linear regression (disregarding the error bars) gives $r \approx 0.97$. This however also ignores that which mass is primary and which is secondary is arbitrary (so probably the diagram should be symmetrized with respect to the diagonal).

EDIT 2: The paper accompanying the data release (arXiv:1811.12907) has plots of the estimated masses (showing the correlation between the errors of primary and secondary masses missing from the plot above) on page 13 and the estimated ratios of the masses on page 14.

I believe this could largely be explained as a selection effect.

Keeping $M$ and the other quantities constant (note that during inspiral, $\nu$ increases, so all binaries go through the same frequency band unless they merge), then we see that $h$ is maximised if $f = 0.5$ and we have an equal-mass binary system.

Flanagan & Hughes do a more careful job show that at a given distance the SNR during the inspiral phase is reduced by a factor of $(4 \mu/M)^{1/2}$ for unequal mass binaries and by a factor of just $4 \mu/M$ when considering the ringdown phase of a black hole merger. This means that for a given SNR threshold, the volumes of space sampled are decreased by the same factors cubed.

There is therefore a big detection efficiency bias against finding very unequal mass binary systems, but only a modest reduction for things within a factor of two or so.

Now, having said all that, there could also be astrophysical reasons for correlated masses and generally quite high mass ratios.

The mechanisms for forming massive black hole binaries that will merge on timescales less than the age of the universe are summarised by Podsialowski (2017).

Production of these systems via dynamical interactions in dense clusters may produce binary black holes with strongly correlated masses. The pairing of black holes with similar masses is favoured (e.g. Banerjee 2017).

Another possibility is the massive overcontact binary model, where two massive stars form a contact binary whilst on the main sequence. They swap mass back and forth and evolve towards an equal mass configuration, before detaching in the He burning phase and later becoming a close-to-equal mass binary black hole system (e.g. Marchant et al. 2016).

Finally, it should be noted that because gravitational wave power losses are maximised for $f=0.5$, this must also mean that such binaries will merge on a shorter timescale from any given separation and so it's mechanism produces a spectrum of mass ratios, the binaries with $f=0.5$ will have a higher merger rate.

Not the answer you're looking for? Browse other questions tagged black-holes experimental-physics astrophysics gravitational-waves statistics or ask your own question.