What will happen to a single photon when it goes through a prism?

Will it just be deflected in the direction related to its frequency?

I made this drawing for better understanding, here if I place a set of detectors after the prism, only one of them would detect the photon, contrary to a polychromatic wave light where all of them would trigger. Does this actually happen? 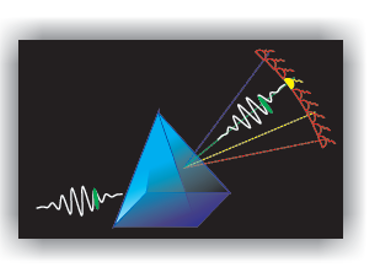 A good answer to this question would require knowing the source of the single photon you're asking about. If the beam from a laser emitting at, say, 532 nm and having a bandwidth of, say, 0.1 nm, is passed through a prism, the angular spread of the beam will be extremely small -- let's say an angle of $\alpha$. Any individual photon in that beam will contain a mix of wavelengths and will land somewhere within the angular spread $\alpha$. If the beam comes from a continuum laser which has a bandwidth that covers the visible spectrum from ~650 nm to ~400nm, then the beam will spread into a rainbow upon passing through the prism, and will cover a much wider angle $\beta$. And, any single photon in the beam will land somewhere within the angular spread $\beta$.

A photon can only be detected once. Before detection, its frequency (and polarization) are indeterminate. That means those properties don't have a value until they are detected/measured. It's not that the properties are not known; the properties don't have a value. The wave packet constituting a photon before detection is just a packet of probability densities, specifying the likelihood that a measurement will yield any particular value. So the wave packet of any photon in the beam is spread by a prism just as the beam is spread, but as soon as the photon is detected somewhere, we assign it a wavelength that it didn't have just before detection. If instead of detecting the photon at that point, we let it pass through a slit in an aperture, we are constraining the wave packet so that the photon, if detected downstream from the slit, is sure to have a wavelength within the range of wavelengths passed by the slit.

Not the answer you're looking for? Browse other questions tagged quantum-mechanics optics photons quantum-optics or ask your own question.

8
Why doesn't the momentum exchange (or lack thereof) between photon and beam-splitter destroy the interference?
4
Single photon pulse and its electromagnet field
2
How do single photons travel from here to there
3
Single photon interferometry
4
Does a single white photon exist?