is it possible to change the color of a blue LED light source? Can the blue be filtered out to make white or some other color?

You can't filter the light to add additional wavelengths (filters could only remove the blue wavelengths and then you'd be left with nothing else) but a completely different approach is extremely common and blue LEDs are actually the basis for white LEDs typically.

Phosphors are used to absorb the blue light emmited by the LED and this puts the phosphors in an excited energy state. When the phosphors return to their normal energy level they release the absorbed energy as photons at various different wavelengths depending on the material used.

Phosphors are extremely common outside of LEDs (fluorescent lighting also uses them to for exactly the same reasons) and are found in various types of displays such as CRT televisions.

No, you can't. Most of the light emitted by a standard magnesium-doped gallium nitride blue LED is in the blue part of the spectrum, as shown here. 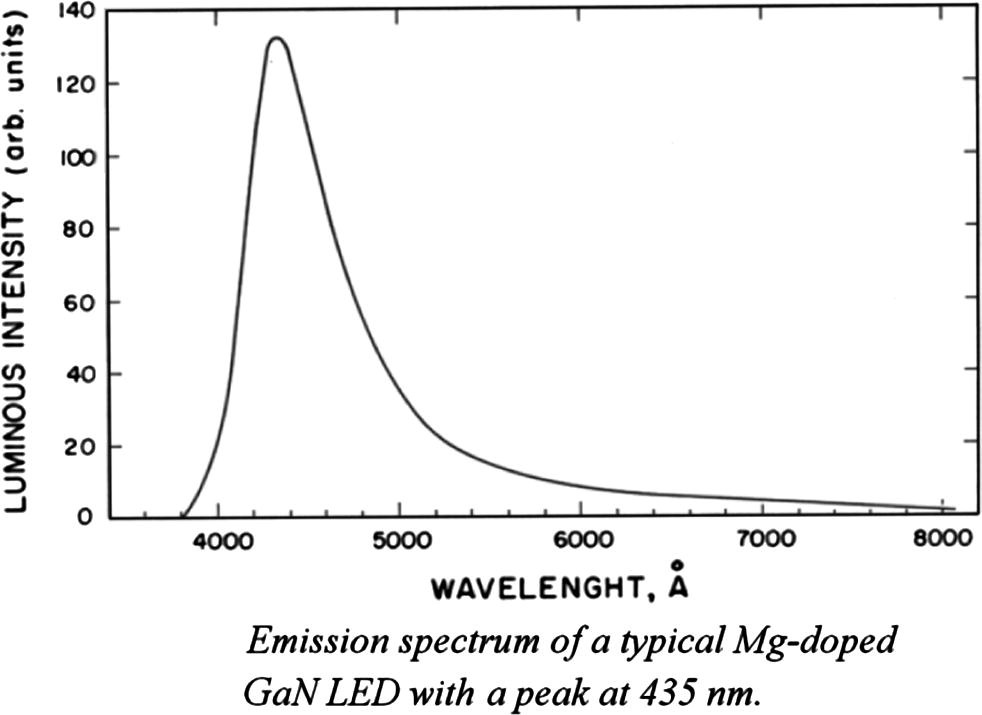 So if you filter it to make it look less blue the resulting light will be rather dim.

Here's a chromaticity diagram from Wikipedia that shows the colours corresponding to various wavelengths. The numbers it shows are nanometres, so they're 10 times smaller than the Angstrom units used in the graph above.

As Jon Custer mentioned in the comments, you can of course use the blue LED to power a phosphor, or mixture of phosphors, to produce any colour you want. But that's not the same as filtering out colours.

A phosphor, most generally, is a substance that exhibits the phenomenon of luminescence; it emits light when exposed to some type of radiant energy.

Also see Why can blue LEDs be used for generating white light, but red LEDs cannot

Not the answer you're looking for? Browse other questions tagged visible-light light-emitting-diodes or ask your own question.

3
Why can blue LEDs be used for generating white light, but red LEDs cannot