Speed vs Velocity of light in Light clock thought experiment

A related question has been asked multiple times (like here, here and here). But none of those answers are clearing my doubt. In fact they're furthering my confusion. My specific doubt is regarding the contrasting explanations in the two common cases described below.

Consider Alice and Bob. Alice is moving horizontally rightward at a uniform velocity of v with respect to Bob.

Alice shoots a light pulse ahead of her (rightward).

Alice is still moving rightward with a velocity v holding a light clock with her this time. A light pulse is shot vertically upward (according to her frame of reference) from the bottom mirror as shown in the image below.

My question is regarding this Bob's observation highlighted in Bold. Why is the direction of light pulse changing according to Bob? It seems like vector addition of v and c but only considering a unit vector corresponding to v. This observation also clearly indicates that the motion of source does affect velocity of light (albeit the speed remains constant).

Kindly note that my question is not about light clock and its impossibility. As far as my question is concerned the second case is just about Alice shooting a light pulse vertically upward. 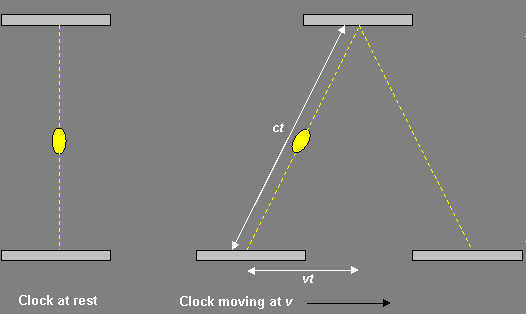 A related question has been asked multiple times (like here, here and here).

I have no time to carefully examine those posts and answers, so I will take the matter anew. My problem however is that I didn't understand what your doubt is. So I'll simply try to present the light clock operation more carefully, and hope this may be of some help to you.

A minor note on your wording

The way you describe directions is not consistent: "upwards" and then "north-east". Maybe Alice sends the pulse northward?

Be that as it may, consider that light pulse is of a very small transverse size and that the mirror too is very small. This means that the pulse has to be very accurately aimed at the mirror, otherwise will miss it.

Another point. If Alice sees the pulse hitting the mirror, the same will happen to Bob. Pulse hitting mirror is an objective phenomenon. It's impossible it does happen for one experimenter and doesn't for the other.

I understand a possible objection could be raised. Bob could say: "I can measure that Alice's light source stayed "vertical", as both its ends are moving, in my frame, at the same speed $v$. I don't understand" - it's always Bob speaking - "how a vertically directed source (e.g. a laser) could emit a light pulse in an oblique direction. Yet I see so it is, but I would like to understand a physical reason for that, independent of light clock and SR".

Bob is absolutely right. I could make him satisfied, by showing that - because of Maxwell equations and of laser functioning - a moving laser really outputs oblique pulses. Or I could give the proof for other possible collimated sources. There is nothing paradoxical in it. But this answer already consumed a significant part of my evening, so I apologize if I refrain from exhibiting these proofs now.

I'm not sure exactly what level answer you're looking for, so let me try twice:

I think you are troubled by the fact that the answer seems to be no when Alice sends the lightbeam eastward and yes when she sends it northward, and these seem to be inconsistent.

But everything is consistent with the velocity addition law: Bob has to measure the light beam traveling eastward at speed $$w={v+x\over1+vx}$$

These are two extreme cases, but they're both special cases of the same general formula. Once you know that formula, the apparent contradiction goes away.

Alice is entitled to consider herself stationary (the first postulate of relativity!), so when she sends the beam northward, it must hit the mirror that's due north of her.

So if the postulates are correct, then there has to be some correct general formula that matches both cases.

Thanks to @Triatticus for pointing me in the right direction. I'm pasting what I've learned as an answer here (for my own future reference as well). I've also posted this answer here.

The relativistic velocity addition formulas are:

These are the components of velocity of the light pulse as seen by the stationary observer. One can also calculate the oblique angle by using $\theta=\arctan{\frac{u_\perp}{u_\parallel}}$. Also, the magnitude of this velocity i.e., $\lVert \mathbf u\rVert = \sqrt{\mathbf u_\parallel ^2 + \mathbf u_\perp ^2} = c$. Thus it can be seen that the speed of light is consistent!

Not the answer you're looking for? Browse other questions tagged special-relativity speed-of-light time-dilation relative-motion or ask your own question.

5
The effect of relativistic near misses
0
Why does photon have to travel in sideways to hit the light clock?
3
Relativity tangential light clock
2
Why does a light beam in a moving light clock follows a V shaped path?
0
Special relativity thought experiment
0
Time Elapsed for a moving observer to reach a reflected pulse of light
7
Does Special Relativity Imply Multiple Realities?
2
Follow Up on “Does Special Relativity Imply Multiple Realities”