Is this geometric argument enough to show that special relativity assumes flat spacetime?

I am preparing myself to teach a class about special relativity a few weeks from now. To make sure they'll understand that spacetime must be flat for special relativity to work, I came up with the following argument, which is based on the famous derivation of time dilation where a moving reference frame ($S'$) sees light take a longer path because of the motion between the reference frames. Basically, this derivation.

To make some context and define notation, here is the picture I am using: 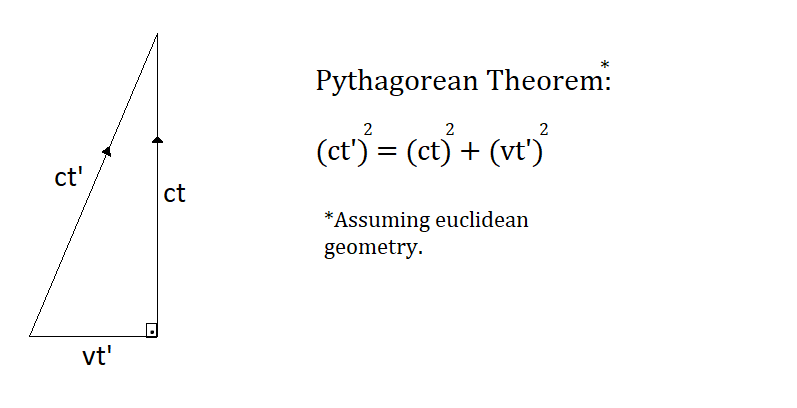 Now this is where my argument begins:

When we draw the motion of light in both frames, we can create a right triangle as shown. But to derive the time dilation formula we end up having to assume that the Pythagorean Theorem holds! Since the Lorentz transformations for special relativity depend on this step (and so all of Special Relativity does), it appears that all of Special Relativity depends on assuming that the Pythagorean Theorem will work.

But the Pythagorean theorem only holds if the geometry is euclidean! Therefore, Special Relativity will only work if space has euclidean geometry.

From here I would present the idea that to generalize Relativity to any geometry we'd need to use General Relativity (GR). But GR itself says that for small enough regions, spacetime can always be approximately flat, which means Special Relativity does hold on laboratory experiments, particle interactions etc. on Earth due to space being approximately euclidean for those cases.

And this is the argument I want to present. I am afraid, however, that this argument might not be correct for some reason (perhaps there is some mistake on the relationship between flat spacetime and euclidean space, but I'm not sure). I have an acceptable Special Relativity background so complex explanations and other (correct) arguments for this are welcome. My problem is that I am not so familiar with the math of GR, and this is could become a big problem for any arguments I come up here.

So I ask: is there a mistake in this argument? Or does it hold? Is it sufficient? If not, please correct me and/or link me to an actually good argument which I could present. My students have also never seen a tensor in their lives, so if possible avoid them. But anyway, all help is welcome!

Furthermore, even if space were not flat, the Pythegorean theorem would still apply to the light clock, because you can make the light clock arbitrarily small and hence spatial curvature effects negligible. And we always implicitly assume the light clock is small. For example, in practice the biggest error would come from differing gravitational time dilation between the top and bottom, which comes from the spacetime curvature, but we always ignore this because the light clock isn't supposed to be tall.

So in any case, I don't think this argument shows what you want it to show, though I suppose you can use it as a jumping off point to motivate further discussion.

Not the answer you're looking for? Browse other questions tagged general-relativity special-relativity spacetime metric-tensor curvature or ask your own question.