Balanced Torques and centre of mass

Say we have a plank of wood that is placed on the edge of a cliff so that one end projects horizontally out over the edge. How would you go about finding the minimum mass that you could place on top of the plank so it doesn’t topple over the edge and remains in equilibrium.

I know the torques must be balanced, but how would the equation for the mass of the object be derived.

Also i think the object should be placed at the end of the plank furthest out from the overhang however what about the center of mass? 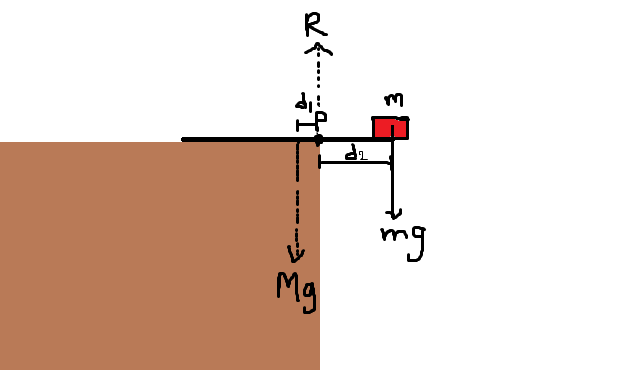 Not the answer you're looking for? Browse other questions tagged homework-and-exercises newtonian-mechanics torque statics or ask your own question.

1
When will the pringles can fall?
1
Why do objects topple on an incline?
0
Toppling and friction
0
Why is the net torque 0 when pushing a block across a table?
0
Newton's laws - why does a plank resting on a friction-less pivot remain in equilibrium when a mass is moved outwards from the centre?