I've come up with a thought experiment myself that might show some kind of interference, but I'm not sure if it makes sense.

Let's first just work out an example of a Schrödinger's cat state: 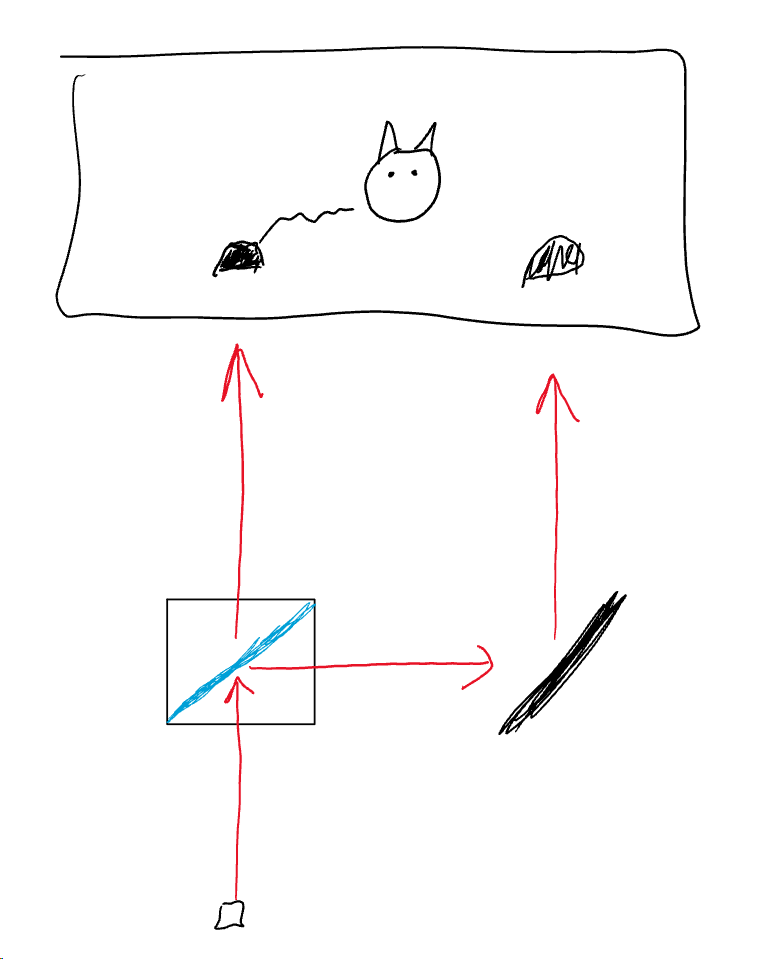 I can take a photon, impinge it on a 50/50 beam splitter - and now the light is in a superposition of reflecting (going "right") or transmitting (going "left"):

Now if I add two detectors for L and R, and kill the cat when I detect L. I obtain a superposition state for the cat. But more specifically, before I check the box, I can see that I have created entanglement between the photon's path if the cat is alive or dead:

So from here, this is an entangled state that has a defined phase. Can I come up with a way of interfering these states so, similar to a Mach-Zehnder quantum interference experiment, that I can recover just an alive (or dead) cat with 100% probability. Quantum Mechanically, you'd expect that should be the case.

So how about this experiment: After measuring the state of the photon in L or R, in addition to killing the cat when the photon is is in L - we create an output photon associated with the direction the photon was found in, and we send it through the beamsplitter again. You can see it illustrated in this picture: 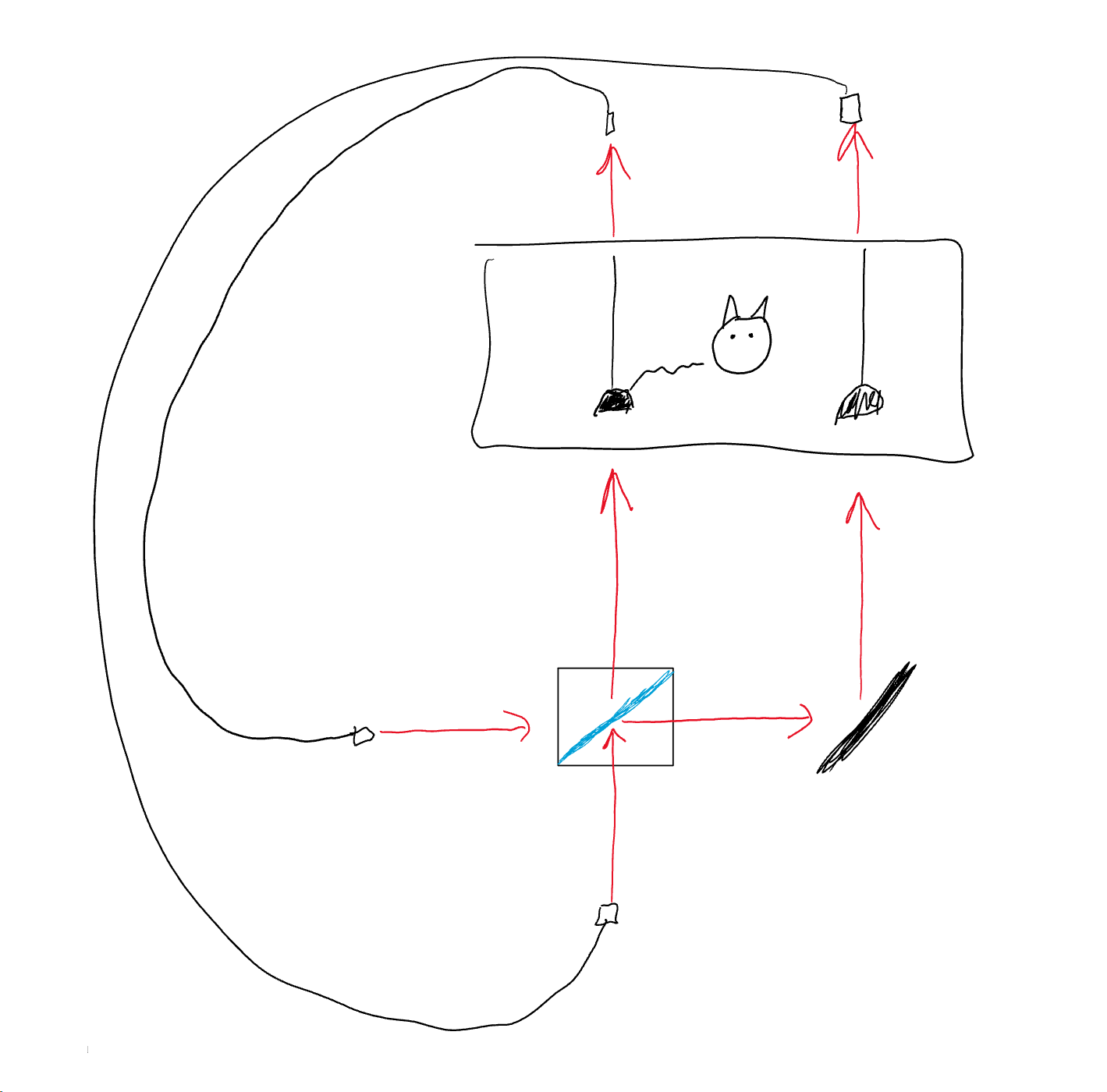 Now the result I get as an answer here seems to be different in the cat's perspective than in the external perspective. In the cat's perspective - it cannot see the phase of the photon. So if it was $\frac{1}{\sqrt{2}}(|L\rangle - |R \rangle) $ we would only see 50% left and 50% right - and thus we could not see (or prepare) the phase properly for the second part. So we don't see any interesting quantum interference that occurs when the second photon is send out - it's just another 50/50.

But if we consider the measurement to simply entangle possiblities as discussed: $$\implies |A\rangle\otimes |L\rangle - |D\rangle \otimes |R\rangle$$ I don't see why this phase wouldn't remain the same. Unlike the previous case, I would think that this negative sign would be truely assigned to the quantum phase of the photon generation - since we have not "collapsed" anything yet by not observing it. But now when we send it - we should expect the probability amplitudes of the entangled states to interfere, similar to Mach-zender interference. Then we should get either $|A\rangle \otimes |L\rangle$ or $|D\rangle \otimes |R\rangle$. I think this would indicate that the cat can "cheat death" in the perspective of an external observer that does not check the first sequence and only checks the second.

Why are these results inconsistent with eachother? My guess is that one of these two methods are incorrect.

Anyway, overall I am looking to understand a thought experiment in which macroscopic cat state could exhibit some type of quantum interference.

If we present your apparatus a bit more fully, the math goes as follows. Let the three parts of the system be first photon, cat (and associated apparatus), second photon. Then the state after first photon is detected is $$ (|D⟩⊗|L⟩−|A⟩⊗|R⟩)⊗|0⟩ $$ where I have followed your words and diagram in saying the cat is dead (D) for the left photon state (L). The final zero state is the second photon which has not been emitted yet. Then the second photon gets on its way, giving the state $$ |D⟩⊗|L⟩⊗|l⟩−|A⟩⊗|R⟩⊗|r⟩ $$ where $l$ and $r$ are states of second photon. After second photon goes through the beam splitter we have $$ |D⟩⊗|L⟩⊗(|l⟩+|r⟩) −|A⟩⊗|R⟩⊗(|l⟩-|r⟩) $$ which is equal to $$ (|D⟩⊗|L⟩ − |A⟩⊗|R⟩)⊗|l⟩ + (|D⟩⊗|L⟩ +|A⟩⊗|R⟩)⊗|r⟩ $$ (I have dropped normalization factors and used a slightly loose notation for the photon modes, following a reasonably standard practice). In this final state we have the outcome we know to expect: the apparatus which detected the first photon and the cat are in correlated states. The cat is either alive or dead (whether in one-world, or in any one world).

Now perhaps I have misunderstood, and you intended there to be just one photon throughout. In this case you still need something to indicate the state of the apparatus which detected the photon on its journey and killed the cat, or not, accordingly. In the above argument the states labelled $|L⟩$ and $|R⟩$ can serve as states of such an apparatus.

Strictly speaking the above is much too rough to treat a real living breathing cat, or indeed almost anything larger than about a millimetre, because it fails to account for the cosmic background microwave radiation, the gravitational wave environment, the magnetic field noise, the thermal radiation, etc. etc. Any of those would easily be large enough to have very significant effects on the quantum phase of a cat. However if we take it that the 'cat' here is really something smaller such as a single molecule, then the treatment is precise enough to serve a useful purpose.

In general, interference between the branches of a macroscopic superposition is never really possible in practice. That's because physically realistic interactions tend to be local in space, which means that they can only couple together states that are identical almost everywhere (e.g. a typical coupling in a lattice model is a tensor product of almost all single-site identity operators with nontrivial operators on just one or two sites). Since local interactions can't couple together macroscopically different states, the states tend to just evolve completely independently without interfering.

This is the key idea behind the many-worlds interpretation of quantum mechanics - each branch of the wave function is equally real, but they can't affect each other in any way, so from the perspective of each branch the other branch might as well not exist.

Not the answer you're looking for? Browse other questions tagged quantum-mechanics hilbert-space interference superposition schroedingers-cat or ask your own question.

9
Is many-worlds interpretation only a philosophical matter?