Would it be plausible for fluctuations in the QED vacuum to spawn actual matter (such as quarks, electrons the constituents of a hydrgen atom) given enough time and space?

The answer is no. And to be clear about this: the set of quantum fields in their least energy state, which we call the vacuum, when left to its own devices, in the absence of stuff (including gravitating stuff) does not fluctuate at all.

In this context the term 'fluctuation' was introduced by well-meaning physicists in an attempt to draw an analogy between quantum uncertainty (i.e. standard deviation in wavefunctions and operator measurements) and thermal (or other) fluctuation. The analogy does not always work very well. See here Is the term "quantum fluctuation" an aide to understanding? for some further discussion.

A brief comment on Hawking and Unruh radiation. The latter (Unruh) is a statement about what happens when a physical system is accelerated through the vacuum. Something has to provide the force which causes this acceleration! Hawking radiation is similar in some respects, in that, as I understand it, an apparatus in free-fall near the horizon does not get its internal degrees of freedom excited (except by the classical tidal forces). But in any case my statement above is about vacuum in the absence of extreme curvature. I would be happy to admit that gravitational tidal forces can be causal, just as other forces are.

And yet ... after writing the above I added a comment to the effect that a particle detector in free fall in otherwise empty flat space will not click. Then I was pushed to justify that and had to admit I'm not completely sure on this specific issue, so I have asked a question here Particles, fluctuations and the quantum vacuum: is this right? to get clarity. (Also, you can see in the comments that the original questioner had in mind not the quantum vacuum but rather a space filled with a scalar field not in its ground state (as a model of dark energy). Such a field can in principle excite other fields, i.e. form particles.)

The answers above are correct. Kramer and Steane make reference to gravitation. This is where things get strange, for a quantum vacuum is only defined in a local region. A black hole for instance has local internal frames patched together by transition functions that under derivatives give connections terms that further with covariant derivatives give curvatures. Because of this you have not a vacuum but a set of vacua. For this reason a transformation on one vacuum can result in a vacuum plus particles or bosons.

Coleman showed how a potential function that with a hump, say a quartic function, that is also asymmetric may generate a bubble of spacetime. Quantum states in the right can tunnel into the left, and where there is an energy gap. This means there might be a transition that produces bosons or particles. This radiation may in general be bubble cosmologies. 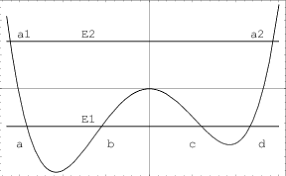 So in general to generate particles you either need a set of vacua, such as those in local regions of spacetime containing an event horizon, or some potential function with different vacuum states. You can't get particles generated out of a global vacuum state. That is unless there is some sort of instability that causes that vacuum to transition into another vacuum at lower energy.

Note: People seem to think that an empty universe is an eigenstate of the full QED Hamiltonian. This is not true. The Hamiltonian is

If we define the vacuum as

That means that the true vacuum

The number of particles is not conserved. Neither is energy with respect to the free Hamiltonian. Even for a single particle.

Normally, a process that violates energy conservation (of the free Hamiltonian!) by an amount $\Delta E$ can only survive for a time $\hbar/\Delta E$. Energy is only strictly conserved (in scattering for instance) for processes where the initial and final states are at $t=\pm \infty$. For example, you could create the state with two positrons and two electrons through the process (time going up): 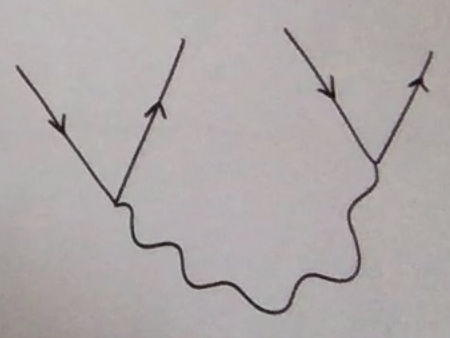 but it would only last a time $\hbar/4m_e \sim 10^{-22}$ seconds. The reason in that in the interaction picture for scattering from $t=-T$ to $t=+T$, the scattering probability will look something like

However, when gravity is included, time can be stretched, making short-lived states very long-lived. This happens when you have a horizon, like when there is a black hole or in an accelerating frame, in which case time can be infinitely stretched, producing matter. I think this also happens in inflation but there the particles get pulled away from each other. Not sure how to show this in terms of quantum mechanics.

But in Quantum electrodynamics and other Quantum field theories, you have also additional zero-Point Energy $\hbar \omega$, which is responsible for e.g. the Casimir effect (when non-charged plates attrackt each other when These have extremely small distance). The frequency $\omega$ can be interpreted as how fast significant changes in the System takes place. For a many-particle System with extremely high collision frequency, the value $\omega$ will be also high, altering the Energy balance to

The last term in this equation on the left Hand side is also called "self-energy" in Quantum kinetic Theory. This self-energy is a complex-valued quantity, where the real part describes the

, while the imaginary part is antiproportional to

the lifetime of the excited state

Another example of the Change of effective Energy/Hamiltonian due to Quantum effects is shown e.g. in this paper:

Not the answer you're looking for? Browse other questions tagged quantum-field-theory big-bang cosmological-inflation virtual-particles matter or ask your own question.

12
Is the term “quantum fluctuation” an aide to understanding?
1
Is wave function collapse the only source of 'randomness' in QM? What about field fluctuations? Are these two even distinct?
3
Particles, fluctuations and the quantum vacuum: is this right?