There is a chapter on general relativity in the book Spacetime Physics Introduction To Special Relativity by Taylor and Wheeler, which qualitatively explains how attractive gravitational force can be understood in terms of space(time) curvature. They give (chapter 9.5, pp. 281-283 in 2nd edition) an example of two travelers on a 2d surface of sphere who start their motion some distance from each other at the equator straight north and move along geodesic (great circle). Because of the surface curvature they accelerate toward each other, and finally meet at the north pole (Fig. 9-4, attached). 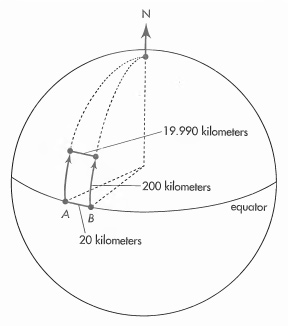 My problem begins once I (probably wrongly) extend the idea and imagine that the surface of the sphere represents the entire closed universe (in which case it would be a 3D sphere). In the case of flat Euclidean universe the two observers moving along straight lines are in inertial motion (they are in free fall though isotropic, homogeneous space) and their distance changes linearly with time, that is without accelaration. When the universe is closed and its curvature is positive and constant, they would observe acceleration although the universe is still homogeneous.

What exactly is wrong in my speculation (I assume that in reality such two observers in Einstein 1917 spherical universe would not meet at a single point) and what makes the difference? The fact that real space has 3 dimensions, the fact that one has to consider 3D+1 spacetime (with Minkowski rather than Euclidean geometry in the flat case), the fact that Einstein universe is unstable, or something else?

Relative acceleration of nearby free-falling test particles is the physical meaning of Riemann curvature. For a geodesic with four-velocity $u$, affine parameter $\lambda$ (which can be taken to be proper time for timelike geodesics), and a vector to an infinitesimally close geodesic $n$ connecting events of equal affine parameter, then the acceleration between them satisfies the geodesic deviation equation: $$\frac{D^2n^\alpha}{d\lambda^2} = -R^\alpha{}_{\beta\gamma\delta}u^\beta n^\gamma u^\delta.$$ Thus, in the presence of curvature, there will be acceleration of nearby geodesics.

What exactly is wrong in my speculation (I assume that in reality such two observers in Einstein 1917 spherical universe would not meet at a single point) and what makes the difference? The fact that real space has 3 dimensions, the fact that one has to consider 3D+1 space*time* (with Minkowski rather than Euclidean geometry in the flat case), the fact that Einstein universe is unstable, or something else?

If you have a static spacetime with spherical spatial geometry: $$ ds^2 = -dt^2 + a^2\underbrace{\left[d\chi^2 + \sin^2\chi(d\theta^2+\sin^2\theta d\phi^2)\right]}_{d\Sigma^2}, $$ where $d\Sigma^2$ is the metric for a unit $3$-sphere and $a$ is constant, then the geodesic equation in those coordinates reduces to $d^2t/d\tau^2 = 0$ for the $t$-coordinate plus geodesics on $S^3$ from the other coordinates (scaled by $a$). With a trivial exception, the geodesics are great circles; if you think of the sphere as embedded in $\mathbb{R}^4$ with the origin at the center, then they are an intersection of the sphere with some plane through the origin1.

First, the trivial case. The cosmological time $t$ is the proper time of a local observer for which the universe is homogeneous and isotropic, which requires the observer to be comoving with the bulk matter of the universe. If the particle is stationary instead, then the spacetime geodesic projected onto the $S^3$ surface will just be a single point rather than a great circle. In that case, their trajectories in space don't have to intersect. Note that this is a looser condition than them meeting, since an intersection of trajectories in space doesn't mean they will be there at the same time.

The main problem is that in $\mathbb{R}^4$, distinct planes through the origin generally don't have anything but the origin in common2 (unlike in $\mathbb{R}^3$, where they intersect to form a line). For example, compare the $x_1x_2$-plane (having $x_3 = x_4 = 0$ everywhere) with the $x_3x_4$-plane (having $x_1 = x_2 = 0$ everywhere): their intersection must satisfy both conditions, and hence consists of only the origin. Thus, it is possible to have nontrivial (moving in the cosmological frame) geodesics in the Einstein static universe that nevertheless do not intersect.

1 For any two points on $S^3$ that are close enough for geodesic between them to be unique, the reflection about any hyperplane going through the two points and the origin is an isometry with those two points being fixed points. The fixed points of any isometry form a totally geodesic submanifold, so the isometry also fixes the connecting geodesic between them. Hence the connecting geodesic is contained in the intersection of all such hyperplanes, which is the unique ($2$-) plane determined by the origin and the two points. We have proven exactly what we should have expected from familiarity with $2$-spheres: geodesics on $S^3$ are also great circles, which in the embedding are given by the intersection of the sphere with the plane going through the center and any two points on that geodesic that are not too far away (really, so long as the points and center are not collinear).

Not the answer you're looking for? Browse other questions tagged general-relativity spacetime inertial-frames geodesics or ask your own question.

2
Tiling hexagons on a sphere surface
3
Is a 4 dimensional spherical universe possible with flat curvature?
1
What is the density of a static dust sphere in an accelerating universe?
0
With north and south poles fixed, do all geodesics have constant $\theta$ and $\phi$?
1
Curvature of spacetime in Friedman cosmological models
2
Space is flat but spacetime is curved?