I feel like this question should have a simple answer, but I haven't been able to find one anywhere. I hope someone can help:

In short, my question is why the force of static friction is so much greater than the adhesion force between two surfaces. If they're both caused by the bonding of molecules on one surface with molecules on the other, why is it that it's so much harder to start sliding one surface across another than to just pull the two surfaces apart? (Look at edit!)

That's the question, for more details I want to explain how it came about:

I was looking at the case of "rolling without slipping". Let's say a wheel is rolling at a constant velocity: the reason there is no kinetic friction is because the point of the wheel that touches the ground gets lifted off straight upwards, and never actually slides relative to the ground.

But then say we exert a force on this wheel, making it move faster, but still roll without slipping. If it's moving faster, the wheel must now also roll faster in order for the point that touches the ground to not slide. There must have been a force (torque) applied on the circumference of the wheel to give it some angular acceleration.

Now, I'm no expert, and I may very well be incorrect, but I've learned that this friction is in turn caused by (London dispersion?) bonds forming between the point of contact of the rubber wheel with the road.

But, if these bonds are strong enough that they prevent the wheel from sliding, why don't they also prevent it from "unsticking"?

My assumption of the cause of friction is the root of the problem. I explain it more in an answer.

I’m not saying this analogy is actually accurate, but if you imagine the two surfaces as having microscopic ridges that interlock like gear teeth, it’s clear that it’s possible to have a high resistance to sliding and little resistance at all to moving apart.

Alright, I think I understand why I was confused. These are just my thoughts and totally not a very scientific analysis at all, but I think the problem is that not a single explanation for friction is sufficient.

The two main questions I want to answer:

There isn't just a single cause for friction. Friction is just any force that opposes the force applied when two surfaces are in contact.

That being said, there are two main models showing why this happens. I think some of us learned one, and some of us learned the other (by us I mean students still only starting physics), so I'm just going to put the two together and hopefully, it helps paint a clearer picture.

The first depends on the "roughness" of the surface: 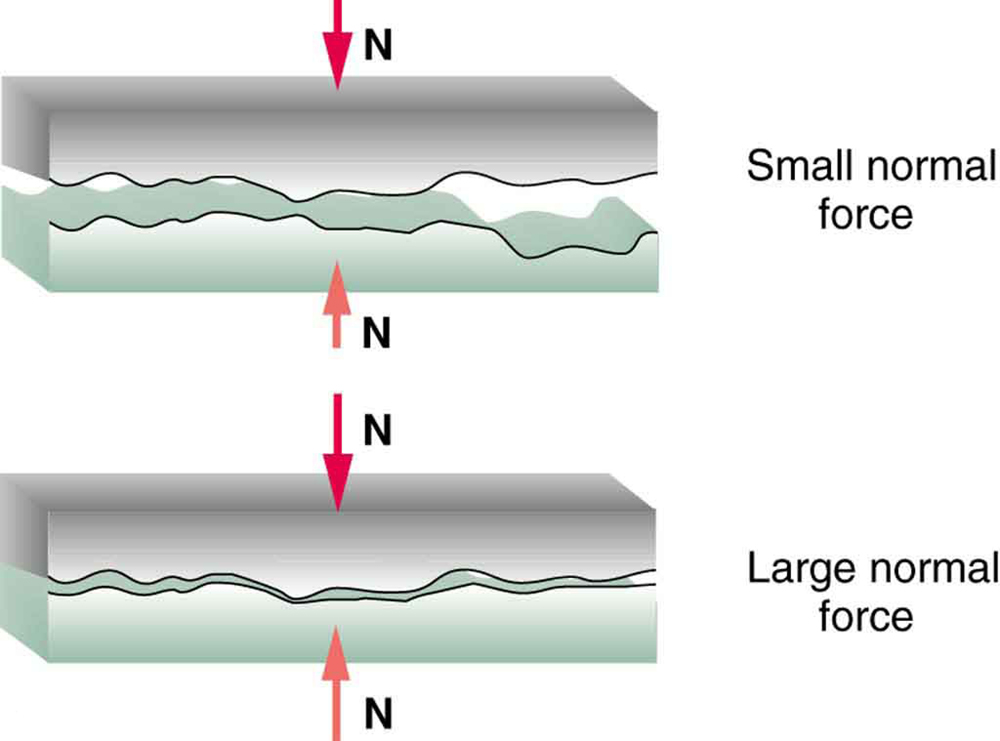 This is because, as @Ben51 described, if the two surfaces aren't smooth, parts of one "interlock" with parts of the other. Those interlocking parts must then be broken off the surfaces when we apply a force if we want the objects to slide past one another, and thus the applied force must be great enough to break them.

This explains why when we slide REALLY rough surfaces past each other, we see little pieces flying off the surfaces. Those are those interlocked parts being broken.

However, this doesn't answer my questions. For one, why is it that static friction is greater than kinetic friction? Secondly, if you look at a table of roughness VS friction, why is it that once surfaces start getting really smooth, friction starts increasing?

Saying that we don't need as much of a force to accelerate an object once it has started sliding because the relative velocity of the surfaces itself helps break the interlocked parts off isn't really a valid explanation.

Breaking those parts requires the same exact amount of force regardless of whether the surfaces are moving or not. Each break will take the same amount of momentum away from the moving surfaces as it would from the momentum given to the stationary one. And as long as the normal force doesn't change, there isn't really any reason for there to be more or less interlocking ridges once the objects start moving relative to one another.

To really explain why static friction is greater, we need to then use a different cause for friction: small intermolecular bonds forming between the two surfaces.

I think static friction is greater than kinetic friction because of this exactly: when the two surfaces start off relatively still to one another, not only must the ridges be broken, but we must also overcome weak bonds between the two surfaces! These don't form when the objects are in relative motion because as one surface slides over the other, there isn't time to form them! 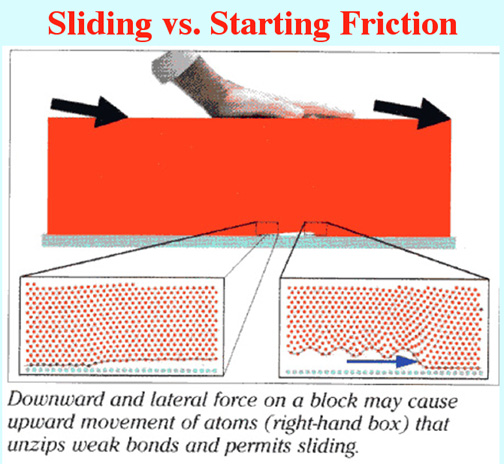 This is also the reason why hyper-smooth surfaces experience so much friction! Since there are almost no rough parts causing a separation between the atoms of one surface and the atoms of the other, the surfaces stick together a lot more (search up cold welding).

I think friction caused THIS way will also cause adhesion, and is, in fact, responsible for the adhesion between any two surfaces, simply not on a noticeable scale because most surfaces aren't smooth enough. And to answer my original question, the force of static friction is greater than adhesion on everyday surfaces because static friction takes into account the bonds AND the ridges, while adhesion only takes into account the bonds.

(I've read other explanations, one said that a vacuum formed between smooth surfaces pressed together and pulled them closer, another that a layer of water held smooth surfaces together, but this is the only explanation that isn't dependent on external agents being the cause)

For the wheel rolling without slipping (at a constant velocity), when the little atom on the circumference of the wheel touches the ground, it never feels a lot of friction because it doesn't need to break any ridges on the ground. This is because its motion relative to the ground looks like this: 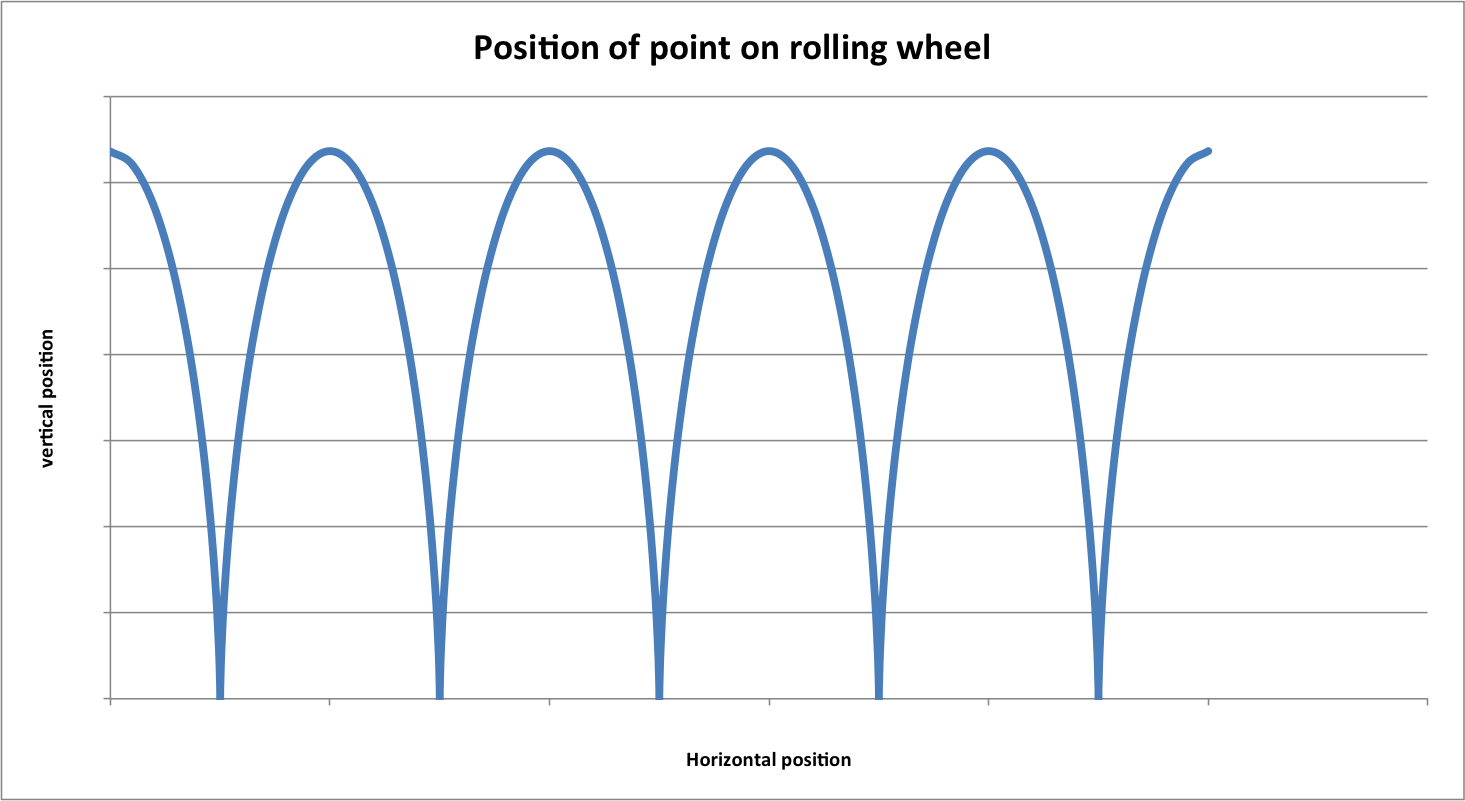 It touches the ground almost vertically, so it wouldn't NEED to break any ridges. The only connection it will feel to the ground is an insignificant amount of adhesion, caused by a small attraction to some atoms in the ground.

However, when we try to accelerate the wheel, the ridges DO come into play, and its the ridges and not intermolecular bonding which causes a net torque on the wheel!

I guess the only way to test this theory (that the intermolecular forces cause adhesion and a greater static friction than kinetic friction, but they aren't as prevalent once the objects start sliding relative to one another) is to see if adhesion forces are reduced when two surfaces are in relative motion with one another. Or to get a microscope and see if a small separation appears between two surfaces once they start moving relative to one another since inter-surface bonds aren't holding them together as tightly.

However, since most everyday surfaces are too rough for this to be prevalent, we don't usually notice it!

Again, these are only my thoughts and not a scientific explanation at all, but hopefully, by putting the two concepts together, this helps someone curious on the internet. It definitely helped me.

Not the answer you're looking for? Browse other questions tagged forces rotational-dynamics friction adhesion or ask your own question.

17
Does the force of kinetic friction increase with the relative speed of the objects involved? If not, why not?