I have the following energy landscape for a binary mixture with a specie $1$ of volume fraction $\phi$ (it is composed for example of colloids) and a specie $2$ of volume fraction $1-\phi$ (for example water). The black curve is showing the free-energy and the blue line is showing that there will be an instable region with a binodal and a spinodal.

But I miss something since I don't manage to get that kind of curve (the free energy is the black curve) : 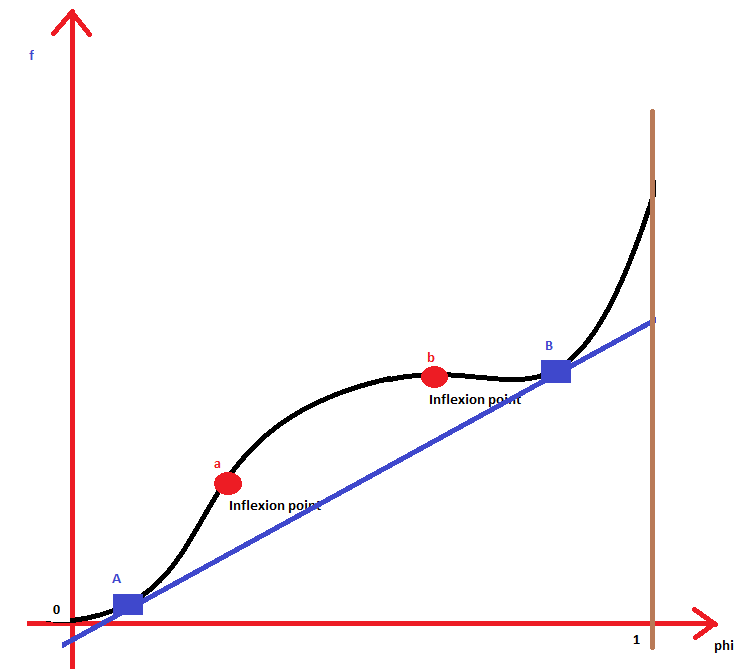 What effect could I add ? The main thing I don't understand is why at small $\phi$ making $\phi$ higher would increase the free energy !?

I'm welcoming any idea, or reference, or even if you saw that kind of free-energy curve before where it was.

You seem to be arguing towards a form for $f_{\text{attraction}}$ based on interactions between particles of one species, but in discussing this you need to consider the balance between all the interactions: 1-1 vs 1-2 and 2-2. This is discussed in many textbooks on physical chemistry and thermodynamics; also online, for example here. A simple approach is regular solution theory, where the entropy of mixing is assumed ideal, but the enthalpy terms are nonzero (and hence, nonideal). Curves similar to the one you draw arise naturally using this approach.

As I pointed out in my answer to your earlier question a common form for the non-ideal excess free energy of mixing is (in your current notation) $$ f_\text{excess} = K\phi(1-\phi). $$ This is an enthalpic term: the physical justification is that it should depend on the product of the concentrations of both species (since it represents an interaction between them). If you make $K$ a positive constant, this will give you a "hump" in your overall free energy curve, favouring phase separation. This is what you want. It comes from a weighted combination of the various interactions, involving the mole fractions.

You can tweak this in several ways. Firstly, you can add the non-mixing contributions to the free energy, which vary linearly with $\phi$, namely $f_2\phi + f_1(1-\phi)$, taking $\phi$ to be the mole fraction of species 2. Here $f_1$ and $f_2$ are basically the chemical potentials of the pure species. This will remove the symmetry about $\phi=1/2$ and give you the slope in your diagram.

Secondly, if you want to make the non-ideal enthalpy term more interesting, you can use a more complicated form than $K\phi(1-\phi)$. One common approach you can play with is to multiply that function by a polynomial in $(1-2\phi)$ like this $$ f_\text{excess} = \phi(1-\phi) \sum_{n=0}^3 K_n (1-2\phi)^n $$ with suitably chosen coefficients $K_n$. In Atkins Physical Chemistry (7th edition, but I guess also in other editions), at the end of the chapter on simple mixtures, he sets a few problems based on fits to actual data, using this form. By keeping the $\phi(1-\phi)$ term as a multiplying factor, you guarantee that the mixing enthalpy term will vanish when either of the mole fractions goes to zero, as it must.

On your last point, as I pointed out in my earlier answer, none of these non ideal enthalpy terms will give you a free energy curve which increases with $\phi$ at small $\phi$. The entropy of mixing term is $$ f_\text{entropy} = \phi\ln\phi + (1-\phi)\ln(1-\phi) . $$ If you differentiate this with respect to $\phi$ you get $$ \frac{d f_\text{entropy}}{d\phi} = \ln\phi - \ln(1-\phi) $$ so the gradient is $-\infty$ at $\phi\rightarrow 0$ and $+\infty$ at $\phi\rightarrow 1$. The extra enthalpy terms are well behaved in these limits. You may need to look closely to see the variation close to the edges of the plot, but definitely the entropy of mixing term wins. $f$ must initially decrease as $\phi$ increases from zero, but the initial decrease may change to an increase while $\phi$ is still quite small. 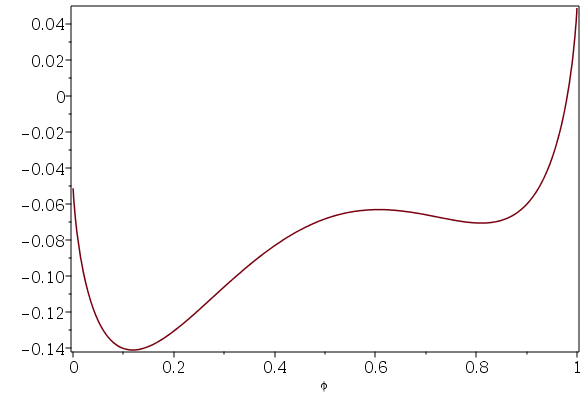 Not the answer you're looking for? Browse other questions tagged thermodynamics energy phase-transition or ask your own question.