Behaviour at an interface plane wave

I have this example diagram that was given in one of my lectures and I am just going through what the equation given actually mean and calculating some results from the equation. Which are the angle of incidence and the type of polarisation the incident wave is.

So here is the diagram with equation given: 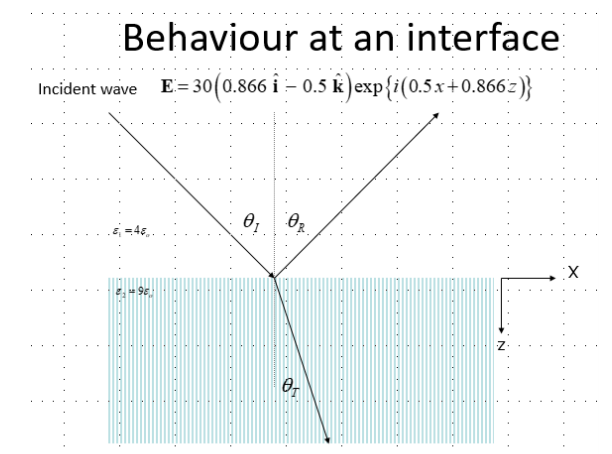 So starting with the first part of the equation:

What I understand of this is that this represent the direction and magnitude of the plane wave, so if a particle was put in front of this plane then, it would oscillate in the $30\left(0.866i-0.5k\right)$ direction.

So for the next part of the equation

So to find the angle of incidence I did the following:

I took the experiential part to of the plane wave equation:

and then looking at the diagram from the propagation vector for incidence $k_i$ I get the following.

Now r vector is given by

comparing this to the equation given I make

Have I understood the equation correctly?

From this I gather that as the wave propagates parallel to the plane which is indicated by the $x$ and $z$ the we are looking at what is called a p polarisation,

but I assume that if say the $z$ or $x$ component was replaced with a $y$ then we would be looking at a s polarisation due to the wave propagating perpendicular to the plane?

Other than that, though,

Have I understood the equation correctly?

Not the answer you're looking for? Browse other questions tagged electromagnetism optics classical-electrodynamics plane-wave or ask your own question.

0
Reflection of a Plane Wave at Oblique Incidence
0
Conditions for characterizing a wave as plane wave
4
Sinusoidal to complex form of wave equation
0
Help finding an alternative to the time average of the Poynting vector
1
Phase of a plane wave is an invariant quantity
1
What happens to the wavenumbers of a EM plane wave when it crosses an interface between two dielectric media?
0
Why is the electric field phase shifted in this circular plane wave?