Why should a moving piston generate pressure variation?

Suppose you have a long tube filled with air, and a piston is moving to and fro in a periodic manner. Why would air pressure variations be created near the end of the piston where it's oscillating ? (I am studying this in sound chapter beginning and I couldn't understand this)

The book is claiming something like this would happen:

I don't have the intuition behind why this happens. If the tube is sufficiently long, then my intuition tells that there would be no pressure variation at all, and moreover pushing/pulling the piston wouldn't require any force. Is my intuition incorrect ?

In an ideal gas, pressure is given by:

Where $N$ is the number of particles (atoms or molecules for example), $T$ the temperature, $V$ the volume and $R$ the ideal gas constant.

Now look at your sketch that I modified a bit: 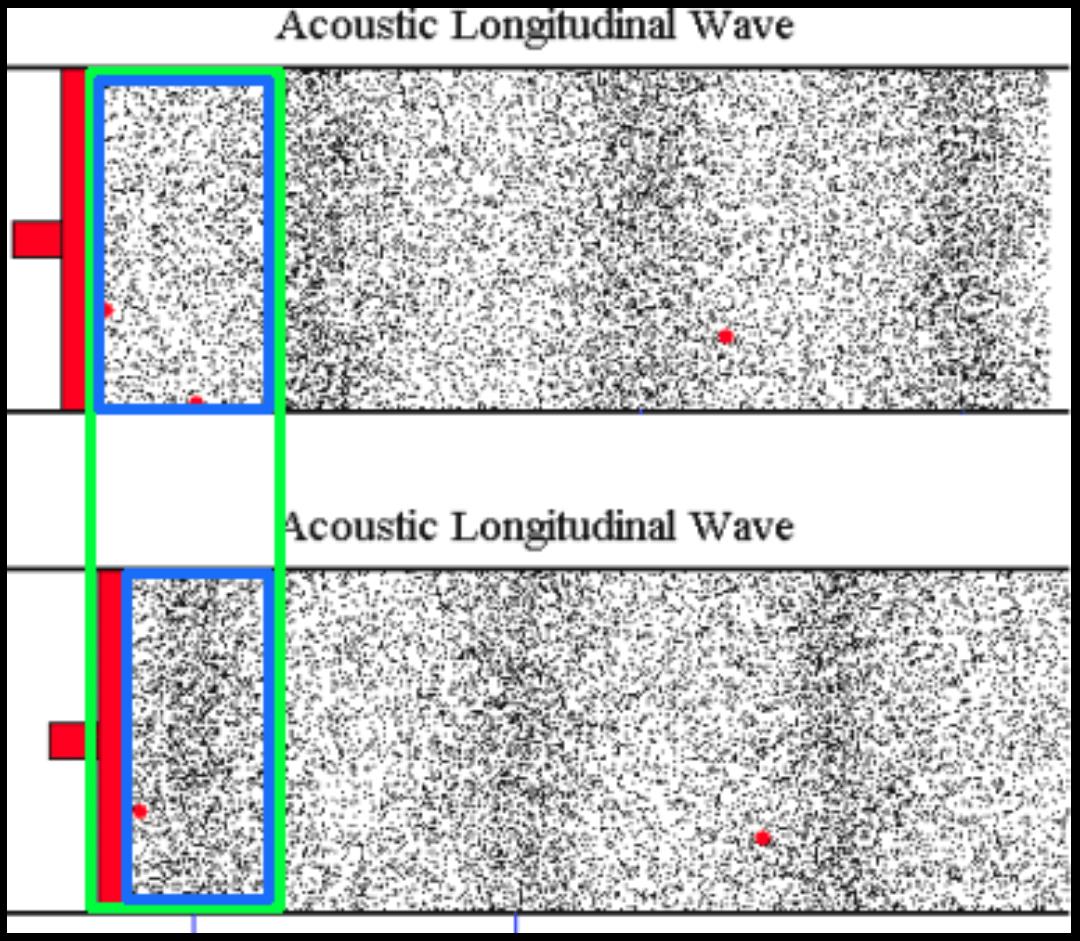 As the piston moves and pushes particles forward, the number of particles $N$ stays the same, but the volume decreases, hence the pressure increases locally.

Now let's clarify some points that you have been asking:

1) If the tube is sufficiently long, then my intuition tells that there would be no pressure variation at all?

The lenght of the tube has nothing to do with the fact that locally, a perturbation pressure is created as a result of the motion of the piston.

You are right when you imply that a little variation of volume $\Delta V$ over a great volume $V_{tot} \gg \Delta V$ would only create a tiny variation of pressure $\Delta P$ over the whole tube, once it has reached its new equilibrium. However, we are interested here in what happens locally, in the small volume right next to the piston. We are interested in the dynamics of the fluid, which you have to distinguish with what would be a quasistatic evolution of the gas inside the tube.

Your intuition would be true if the pressure perturbation was traveling at an infinite speed, which is not the case (due to friction, inertia, etc...). In fact it does travel with a velocity equal to sound speed.

Gas particles are trying to move away, but as they are displaced they encounter their direct neighbours, which prevents them from expanding further. As a consequence they can only communicate that perturbation pressure to the next slab of gas, and so on.

3) Why would the" pressure change wave" propagate through the tube instead of staying in the original position?

As you can infer from 2), the pressure perturbation pressure propagates along the tube as adjacent slabs of gas are communicating that overpressure to each other. That is all acoustic waves are about.

In this case, the book is correct and your intuition is not. This may be helpful:

The air in the vicinity of the piston face has both compliance (it is springy) and inertia (it has mass). When the piston advances into the tube and presses against the air, its inertia makes it resist being accellerated while at the same time its compliance causes it to compress slightly. As the piston continues to press on it, the air eventually gets set into motion and acquires momentum in the same direction as the piston's velocity in addition to experiencing more compression.

In addition to being in communication with the piston face, the parcel of air next to it is also connected to the parcel of air immediately adjacent to it on the other side. That air parcel in turn begins experiencing a pushing force from the other one and it too gets compressed and set into motion.

This process then continues all the way down the tube, away from the moving piston, and the zone containing slightly compressed air then travels off on its own as a wave.

If the tube is sufficiently long, then my intuition tells that there would be no pressure variation at all, and moreover pushing/pulling the piston wouldn't require any force. Is my intuition incorrect ?

I think your problem is your intution is taking an assumption from static or essentially static scenarios and trying to apply it to a highly dynamic scenario.

But that doesn't mean it's universally true that pressure is equal everywhere in a container. It takes force to accelerate something and in a fluid that translates to a pressure gradiant.

Acoustics is all about moving beyond the assumption that pressure is equal everywhere and studying the propagation of pressure waves in fluids.

Regardless of the tube length, you still have to move some air molecules. That requires force. Suddenly the pressure (force per area) is therefore larger at the very first molecules than at other molecules, simply because you now add pressure to them.

They therefor move. And soon they get close to their neighbours. And they hit them and exert force on them. The pressure is now put in those second layer molecules. This continues and this is how the pressure propagates.

At the same time the piston is pulled back as your illustration shows. This creates a vacuum that sucks the molecules back again. So they are moved back and forth all the time by pressure and vacuum (negative pressure) constantly in whatever frequency the piston moves with.

When the piston moves, it pushes on the air molecules that are right next to it. The "push" doesn't travel down the tube instantaneously, but at the speed of sound. A sound in the middle of the pitch range that humans can hear has a frequency between say 100 and 1000 vibrations per second, so the "push" travels fairly short distance down the tube (of the order of 1 meter) before the piston has reversed direction and is now "pulling" on the air close to it.

This causes a regular pattern of high and low pressure regions travelling down the tube at the speed of sound, as shown in your picture.

For the lowest frequencies that humans can "hear" (as opposed to "feel" if the amplitude is high enough) - say 20 Hz - the distance between the pressure peaks would be about 17 meters, so you would need a tube maybe 50 meters long to get the pattern of high and low pressure shown. But if the tube was long enough, the pressure changes would be as shown in the animation.

You can demonstrate a similar effect which happens slowly enough to see what is going on. Get a few meters of rope, tie one end to something and hold the other end so the rope is off the ground but not stretched tight. If you jerk the rope sideways once, you will see a one "pulse" of a "wave" travel along the rope to the other end. If you shake the rope continuously, you make a series of "waves" travel along it.