Will the SI units need redefining ever again?

Up until recently, there were obvious problems with the SI definitions of fundamental units, like bits rubbing off the kilogram prototypes (or mercury vapour absorption), and the water used for the kelvin definition being only found in Switzerland.

With these new definitions mostly defining the units in terms of fundamental constants, will there be a need for any further revision to the SI definitions? There are no more physical artefacts/prototypes to remove from the definitions, so unless we abandon SI units altogether, does anything else need to change?

The existing answer by flippiefanus is on the right track, but there is no "perhaps" to the thing. The second is definitely on track to be redefined, at some point in the future; it's not so much a question of "if" but of "when" and "to what".

This is because optical frequency standards are already better than microwave caesium-based standards, and they are improving at a much faster rate, with no real obstacles foreseen to substantial progress at a similar pace for quite some time. The BIPM has an excellent graphical depiction of the situation: 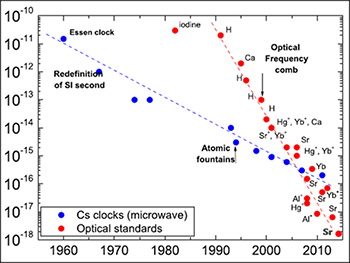 As you can see, there are already multiple optical-clock frequency standards whose precision exceeds that allowed by the fundamental limitations of the SI second as currently defined (i.e. the blue dots). Thus, those experiments are able to e.g. measure frequency ratios to a higher precision than allowed by the SI second, but they cannot quote absolute frequencies because the caesium standard they'd need to compare to just isn't precise enough.

(This is analogous to the situation with the meter just before it was redefined to set $c$ to a fixed value: we had extremely precise measurements of e.g. the distance to the Moon, but the dominating uncertainty on those was the uncertainty in $c$ itself.)

So, this will need to be fixed at some point. However, the optical-clock technology is still developing, so we don't quite know just yet what the optimal techniques, platforms and media will be, and it isn't clear which atom or ion is best for the role of standard reference. Thus, it will take a fair few years of scientific and technological exploration to have a better understanding of that landscape, followed by some time to build up a consensus about which system is best, before a redefinition can be put in place.

As for the broader question for the rest of the SI units: who knows! It's entirely possible that improvements in technology will lead to a similar replacement of a mise en pratique or a constant, though it's hard to see what could change given the general nature of the other six constants (versus the particular nature of $\Delta\nu_\mathrm{Cs}$). Similarly, it's entirely possible that at some point we'll need to do an overhaul of this magnitude, given a sufficient advance in both our technical and conceptual standpoints.

However, beyond the change to optical clocks, no further changes to the SI are foreseeable at present.

One possible redefinition that is foreseen, is that the second may be redefined. Currently, it is defined in terms of a radio frequency of the Cesium atom. However, there are many optical clocks (clocks based on some optical frequency of some atom) that can measure time intervals more accurately. Perhaps in the future, the definition of the second may be based on one of these optical clocks.

Not the answer you're looking for? Browse other questions tagged conventions definition si-units metrology or ask your own question.

12
What's keeping us from simply redefining Avogadro's Number / the Mole as a definite integer?
0
How are the SI units "generalised"?
3
Redefining the kilogram using Planck's constant instead of the density of water among other examples
3
Is the International System of Units complete?
0
About the dimension of the SI units vector space
2
What are the units of wavenumber? With or without radians?