How massive is the Sun compared to other stars?

I was just reading "Rare Earth" by Peter Ward and Donald Brownlee and they claim that $95\%$ of stars are less massive than the Sun. But, I was always told the Sun is an average star. Which is it?

The notion that the sun is an 'average' star, is a popular notion, not a scientific one. It is to my knowledge based on the spectral colour-classification (OBAFGKM..) of stars, where the sun (G2-class) hits about the center of this classification, depending how many classes one adds at the end.

However by number, the sun is not average, it is on the rarer end of the mass distribution function. See also this graphic, provided by the University of Colorado: 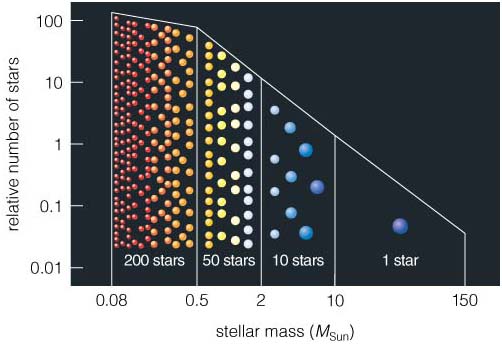 This has to do with two effects:

1. Heavier stars burn through their fuel much faster than low-mass stars.

In star-forming environments it is the 3D-turbulence that clumps gas together at smaller and smaller scales (as opposed to larger and larger scales). It is because of this, that there are more small clumps that become gravitationally unstable than large clumps, which then form stars of a given clump mass.

"I was always told the sun is an average star" is not really an established scientific fact. It doesn't hold true for any reasonable definition of "average", unless you're ready to accept a definition specifically crafted to support the statement above.

Simply put, it's not true.

So I think other people have given great answers, but I think the question still remains, what do people mean when people say that the sun is an "average" star?

I think what they mean that the sun is "average" in the sense that the in terms of the biggest and smallest stars that we've ever found, with radii $R_\text{max}$ and $R_\text{min}$ respectively, the solar radius $R_\odot$ is approximately the following:

So this has little to do with how many stars there actually are with radii around $R_\text{min}$ or radii around $R_\text{max}$ (it turns out there are a lot lot more stars with radii smaller than the sun than radii bigger than the sun), it's just saying that the sun is not the biggest or the smallest star, its size is average. It's just this average is not a weighted average, it's just averaging the extreme radii that we've seen in the universe.

Not the answer you're looking for? Browse other questions tagged mass astrophysics astronomy sun or ask your own question.

6
What does this stellar mass distribution mean?

7
How did enough material from other dying stars accumulate to start our sun and planets?
5
Photons arriving from the Sun
10
How many percent of the visible light reaching the Earth are from other stars than the Sun?
14
What is the percentage of stars that are massive enough to end their lives in a supernova?
1
How do scientists tell us the mass and size of planets and stars $20\,{\rm ly}$ or more away?
0
Why does the Sun appear more round while distant stars can appear more pointed?
21
Finding how much time it takes for a complete Earth revolution around the Sun