How much force would be necessary to hold a 6-foot steel staff weighing 20 lbs from one end of it, parallel to the floor?

This isn't a homework problem. I'm asking cause I'm wondering how strong a person would have to be to pull it off. Their arms would be extended, both hands gripping the staff at one end, and the staff is facing directly away from them, parallel to the floor, going through their 'z-axis' as it were (with x being left-right and y being top-bottom).

It's a 20-lbs staff. 20-lbs net force are required to hold it up, regardless of its orientation.

If you just apply this force to one end of the staff, though, there would be a net torque.

Instead, you need to use your hands to apply two forces to the staff. One force, exerted by the near hand on the very end of the staff, should be down. The other, exerted by the far hand a few inches down the staff, should be up. You can imagine a see-saw. The far hand is the pivot of the see-saw, which pushes up on the board. The near hand is a very heavy person sitting very near the pivot, and the pole itself is a very light person sitting far from the pivot. (The weight of the pole itself can be considered to be concentrated at the half-way point.)

There are three forces on the pole and hence two distances between them. The ratio of the forces at the extremes needs to be the inverse of the ratio of the distances. That is, if one force is three times further out from the pivot, it should be one-third as large.

Let's say the distance between your hands is four inches, or 1/3 a foot. The distance to the middle of the pole is about 3 feet, or about 10 times as much. So you need to exert a force of about 200 pounds down with your near hand and 220 pounds up with your far hand.

If both of the person's hands were really at one end of the staff, it wouldn't be possible.

The reason is that, in order for the staff not to move, the net torque on it has to be zero. With only one plane of rotation, the torque due to a given force can be defined as

where $r$ is the distance from a chosen "center of rotation" to the point where the force is applied, and $F$ is the magnitude of the force. Now, suppose you choose the point where the staff is being held as the center of rotation. In that case, the hands exert zero torque since $r=0$ for them, but the force of gravity acts on the center of the staff, 3 feet away, so it exerts a nonzero torque. Thus the total net torque is nonzero, and the staff will drop.

However, if you take into account that a person's hands have some finite size, and thus they can't be holding the staff exactly at its end, then it's possible to hold it up. The force required will depend on where the hands are positioned, though. 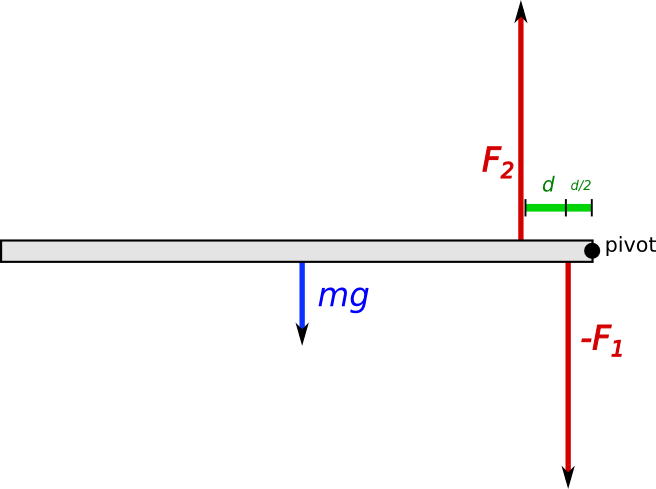 Suppose $d$ is the width of the person's hand, and suppose that the force exerted by each hand is applied exactly in the center of that hand. (This last assumption isn't true but it's probably good enough for a basic explanation) Then you have three forces being exerted on the staff: gravity acting through its center, the force from one hand acting at a distance $d/2$ from one end, and the force from the other hand acting at a distance $3d/2$ from that same end. In order for the staff to be stationary, all the forces have to cancel out:

and all the torques have to cancel out:

Plugging in the given numbers with a reasonable guess for hand width, I get 770 N (170 lbf), directed downward, for the first force (closer to the end of the staff), and 860 N (190 lbf), directed upward, for the second force. So we're basically talking about the ability to exert 200 lbf with each hand, although you could rely on the structural integrity of your arm to help you out.

Notice that, since one of your hands is pulling upward and the other is pushing downward, the net force is 90 N, or 20 lbf, upwards - exactly what is needed to support the weight of the staff.

I'm asking cause I'm wondering how strong a person would have to be to pull it off. Their arms would be extended, both hands gripping the staff at one end, and the staff is facing directly away from them, parallel to the floor, going through their 'z-axis' as it were (with x being left-right and y being top-bottom).

We do this occasionally at my martial arts dojo, using a 1 meter, 1 kg staff, as a conditioning exercise. The physiology is very interesting, and the physics of the joints, bones, and supporting muscles goes far beyond the raw torque. Within a minute or two, you start feeling truly astonishing levels of pain and burn.

I'm actually skeptical that any normal human could succeed with a 2 meter, 9 kg staff for a significant length of time.

Incidentally, I'll try to remember this, and do the calculations next time we do this exercise as a distraction from the agony.

You will need to support the rod at distance 'd' using your hand at the end where you are holding it.(look here) i.e. 'd' can't be zero.

Since you cannot hold the staff at exactly the end, your hand (or rather, your finger on the longer side of the staff) would become your fulcrum and your question becomes a first class lever problem with the weight of the long side becoming the force and the resistance the small part against your hand, in equilibrium. Roughly, something like... F*lever arm = R*Resistance Arm... you'll have to get one of the smarter guys here to calculate the force on the lever arm.. I think you might have to integrate over the length since the force is not acting along a single point on the lever.

Not the answer you're looking for? Browse other questions tagged forces torque statics or ask your own question.

17
Block on a block problem, with friction
2
Newton's Third Law of Motion
0
Why can't I calculate center of mass via torque? Results off by a few percent
1
Force applied to an inclined plane
20
The best way in which a man can pull a train
1
How exactly do walking canes and crutches help?
0
Finding the force exerted by a mass at different contact points
2
How does one typically determine the energy and force in a foot stomp?