What does a photon emitted by an atom "look" like?

Consider the emission of a photon when an atom decays from an excited state to its ground state. In most cases, this emitted photon is depicted as a small wave-packet being expelled by the atom in a well-defined direction. However, quantum optics tell us that photons are essentially associated with the amplitude of plane wave modes forming an electromagnetic field. Therefore, the small wave-packet representation seems rather suspicious...

What does the emitted photon really "look" like then ?

Assuming that the emitted photon has a corresponding wavelength much larger than the size of the atom, the atom should essentially behave as a small electric dipole. Therefore, considering lifetime broadening, it seems to me that the photon should propagate away from the atom as a pulsed dipolar emission. Is this correct ?

But everybody has their own picture of what is "really" happening in quantum mechanics.

So let me add my dime. Actually I wouldn't talk about what is really happening. Rather, about how quantum mechanics describes a photon. It has some peculiarities, deriving from its vanishing mass. But apart that, a photon has a state, which will be different according to how it was emitted, from where, and so on.

If we consider the usual case of an atom in an excited state which emits a photon by jumping to a lower energy state, most often it will be an electric dipole transition and the photon will have a state the kind @Andrew Steane depicted. What I want to emphasize is that in such state the photon has a momentum vector totally undetermined as to its direction, even though probability is not the same in all directions, being maximum in the equatorial plane and zero at the poles.

On the contrary momentum magnitude is very well defined, like energy (for a photon $E=cp$). Not exactly defined however. As already remarked photon state isn't a stationary one, but with a time dependence, say exponentially decaying. Translating into the frequency-energy domain, photon energy has a Lorentzian spread around an average value, generally small for atomic transitions.

But strange things may sometimes happen, e.g. quantum beats (see wikipedia article "quantum beats"). If the atom was preparared in a superposition of two nearby states, when it decays it emits a photon in a superposition of different energy eigenstates. This state exhibits an oscillating behaviour, revealed by an oscillating probability of detection at different times. (Of course this cant't be seen with a single atom. An ensemble of atoms must be prepared in the same state at the same time.)

So it is not a matter of tastes in describing a photon. It is that - like every quantum system - it can be revealed through different apparatuses, measuring different observables. E.g. if the detector is a CCD or the like, we will be measuring photon's position. If it's sent on a grating its wavenumber (i.e. its energy) is measured and so on. This is QM.

Nice question! My answer is same as G. Smith but gives a bit more info on temporal part. First I'll summarize the experimental observations, then share what picture this suggests to me.

First, let's agree that we have an atom that is prepared each time in the same specific excited state, with a well-defined $z$ axis (imposed by a small applied magnetic field), and we place photon detectors at various locations, wait for a click (photon arrival) and then repeat. We observe the following:

Each photon can be said to be an excitation of a mode or collection of modes of the electromagnetic field, where by a mode we mean a distribution over space and time. The above observations tell us the spatial and temporal shape of the modes involved in photon emission from an atom (and this agrees with the predictions of quantum theory). So instead of the little wave packet you mentioned, I find myself picturing an electromagnetic wave surrounding the atom, in this dipole pattern, oscillating at the emission frequency, with an amplitude at the source (the atom) that decays exponentially with time. 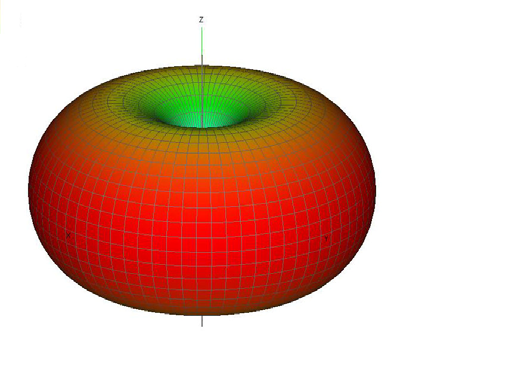 However, as G. Smith says, you can if you like abandon this wave picture and just opt for a particle that goes from one place to another in a straight line, and the mathematical wave (the shape of the mode), when squared, tells the distribution of probability over directions and time.

In short, my answer says that your own hunch was exactly right. The only thing I would modify in your question is the close connection between the word "photon" and the word "plane wave". The plane waves are just one way of decomposing the field (one basis if you like). When we say "a photon" we normally mean that the expectation value of the number operator is 1, but this single excitation can be distributed over multiple modes in a superposition.

The photon comes out with a direction and a polarization that have a particular probability distribution. The rate of spontaneous emission per solid angle as the atom transitions from initial state $i$ to final state $f$ is

where $\alpha$ is the fine structure constant, $\omega_{if}$ is the frequency of the transition, $c$ is the speed of light, $\vec{\epsilon}_j$ are two orthogonal polarization unit vectors perpendicular to the direction of emission, and $\vec{d}_{if}$ is the matrix element of the dipole moment between the initial state $i$ and the final state $f$.

The dependence on direction and polarization is probably consistent with the flux of energy and momentum from a classical oscillating electric dipole, but I haven’t checked that.

I think of the emitted photon as a point particle (but with a polarization vector) traveling in a straight line from the atom to the measuring device. It is simply more likely to come out in some directions than others, and to prefer certain polarizations. But everybody has their own picture of what is "really" happening in quantum mechanics.

I think eigenstates of the free Hamiltonian (the "photons" whose energy is quantized) can be plane waves $|\,\vec{k}\,\rangle$, like you said. But here the outgoing state is also an angular momentum eigenstate so the correct basis is the spherical waves $|klm\rangle$. Although these waves are spherical and go out in all directions, when you detect this photon on a screen, it collapses roughly to an energy eigenstate.

(In general, however, it's possible that the outgoing state might be a superposition of states with different frequencies and even different numbers of photons, as long as these states are consistent with the final state of the photon. The spread in frequency could come from the momentum uncertainty in the atom.)

Rule #1: This is a photon, and all we are sure about is that a photon is an electromagnetic phenomenon. This fact, though, carries an implication: that the effect, being electromagnetic, can be directed - and possibly shaped - by a magnetic field.

Rule #2: Electromagnetic effects propogate at the speed of light. So sue me: we know, too, its speed of propogation. But, conveniently, this second fact is often ignored or misrepresented. It, too, carries an implication. Above, one of the answers (Andrew's) suggests that the effect can be described in language identical to the description of a toroidal magnetic field.

The speed of propogation implies, of course, that if the photon is a single point source, by travelling so fast it could appear (to our eyes) as being a toroidal shaped shell, since if it is trapped in a tiny magnetic "bottle" it would (at that speed) be capable of being in so many places over the course of one twenty-fourth of a second that it would appear to be at all points on the surface of that minute toroidal shell simultaneously.

In my opinion, Heisenberg's uncertainty principle is understandable on a consideration of what is happening here: to our unaided senses, the photon seems to be present at all points on the surface of our (hypothetical) toroidal-shaped magnetic "bottle", simultaneously. When physicists speak of being "uncertain" where the photon is, I try to bear in mind the speed at which it propogates, and the tiny distances involved at the quantum level: in a 24th of a second (the exposure duration of each individual frame of a movie) it can potentially pass through every single point on the theorised toroidal surface at least a hundred times. That, it seems to me, is the very essence of the nature of uncertainty.

I don't claim that it is a point-like particle. I'm not convinced by the arguments that suggest it is. But if we theorise that it might be, we get some insight into why uncertainty over its position and direction can exist, if both are changing too rapidly for us to measure, maybe too rapidly for any possible measurement to be meaningful.

Does this mean the photon "looks like" a point-like particle? Or does it mean it "looks like" a toroidal-shaped shell totally surrounding and obscuring the magnetic dipole? I suppose, if you freeze-frame, and so discount its motion entirely, it could look like the former; but if the universe of spacetime includes time, then over any meaningful time-period it could look like the latter.

Uncertainty: do we create this ourselves?

Any possible measurement we make in so minute an environment is certain to fatally disrupt the effect we are trying to measure, because the effect being measured is so ephemeral. When we "measure" it, we inject so much additional energy that we totally disrupt the tiny system we are measuring.

We only know how to measure by employing some type of bombardment: we are trying to do the equivalent of measure the position and momentum of a soap bubble, by the subtle procedure of hurling house-bricks at it!

This, I think, is what physicists mean when they say that particles (in general, not just photons) are uncertain in either position or momentum: the energy imparted to the "particle" in measuring either of those properties alters both its position and its momentum, rendering a further measurement (i.e. of the other property) meaningless.

It is most difficult to get a clear picture of what an object looks like by smashing it to pieces, with all the subtlety of an atom-smashing technique governed by the delicate scientific approach termed (in the scientific community yet!) as "brute force and ignorance".

Not the answer you're looking for? Browse other questions tagged electromagnetic-radiation quantum-optics or ask your own question.

41
Can a photon get emitted without a receiver?
2
Energy conservation if photon absorbed below resonance
6
Intuition for why there are quantum beats in $V$-type but not in $\Lambda$-type atoms
0
Stimulated emission interrupted by collisions
6
Very old photons from the Sun
2
Photon emission in Wu experiment
2
Purcell enhancement at an angle: Direction of charge oscillation