Is the normal force equal to weight if we take the rotation of Earth into account? [duplicate]

In my physics class we were doing problems such that we set $N$ (normal force) $= mg$. I understand that by Newton's Third Law, if I exert a force on the ground, then the ground will exert an equal and opposite force on me. However, the part that I am slightly confused about is that when the Earth rotates, and thus I rotate too, I am accelerating with the centripetal force towards the center of the earth (assuming I am at the equator). How am I doing this if the normal force equals $mg$? If the normal force doesn't equal mg then why isn't the ground exerting an equal and opposite force?

You are right to question this. The normal force is equal to the weight is when the acceleration in the direction of these forces is $0$. More explicitly, $$\sum F=N-mg=ma=0$$ $$N=mg$$ (I'm sure you could contrive examples where there are more forces in this direction so that $a\neq0$ but $N=mg$, but I won't do that here).

There are many examples where $N\neq mg$. For example, in an elevator that starts moving up, the normal force exceeds your weight in order for you to accelerate upwards.

In your example of the earth, the acceleration is equal to $\frac{v^2}{r}$ where $v$ is your linear velocity and $r$ is the radius of the Earth. Therefore$^*$, $$N=mg-\frac{mv^2}{r}\neq mg$$ You also specifically ask why this is the case in this scenario. The physical reason is because your instantaneous velocity is tangent to the Earth, thus you have some "pull" away from the Earth (due to your inertia), causing a reduced normal force. (You could also move to a rotating frame and attribute this to a centrifugal force).

In the case of a box resting on an incline at angle $\theta$, the normal force and the weight are not aligned, and so it turns out that $$N=mg\cos\theta\neq mg$$

So as you can see, we really can only take these forces to be equal when they are in the same direction and there is no acceleration. (Once again, you could probably contrive some examples to make this not the case, but I am talking more generally here)

$^*$ The value of $g$ I use here is from the approximation of a spherical Earth at rest, so that $g=\frac{GM}{R^2}$ where $G$ is the gravitational constant, $M$ is the mass of the Earth, and $R$ is the radius of the Earth. If you considered $g$ to be the measured value of acceleration near Earth's surface, then there centrifugal effect would already be in effect in this measurement. In any case the point still stands that the normal force is not equal to the force of gravity between you and the Earth.

I'd like to finalize the conclusion from @AaronStevens's great answer. In the truer expression for normal force (on flat ground) that he arrives at,

Compare this with $g=9.80\,\mathrm{m/s^2}$. The contribution of Earth's spin to the effective gravitational acceleration $(g-\frac{v^2}{r})$ is thus only something like 0.3 %. You can try to calculate a normal force for an object with and without this influence and see if there is a significant difference within significant figures.

Let me brief it out qualitatively and also give a slightly different way of looking at it.

Here is a diagram of an ideal spherical Earth radius $R$, mass $M$ rotating at an angular speed $\omega$ with an object mass $m$ in contact with the surface of the Earth. 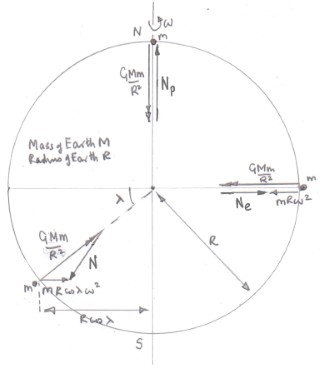 The object on the Earth is subject to two forces: gravitational attraction $\frac{GMm}{R^2}=mg$ where $g$ is the gravitational field strength and a reaction due to the Earth $N$.

The net force on the object produces the centripetal acceleration of the object.

At the poles there is no centripetal acceleration so $mg -N_{\rm pole} = m 0 \Rightarrow N_{\rm pole} = mg$ the equation that you quoted in your first sentence.

At the Equator the equation of motion is $mg - N_{\rm equator} = mR\omega^2$ so the normal reaction $N_{\rm equator}$ is smaller than the gravitational attraction $mg$.

At other points on the Earth the reaction $N$ is smaller than the gravitational attraction $mg$ but not by as much as at the equator but you will note that on a spherical Earth that reaction is no longer normal to the Earth's surface.

A better approximation to the shape of the Earth is that it is an oblate spheroid (like a squashed sphere) as shown greatly exaggerated below. 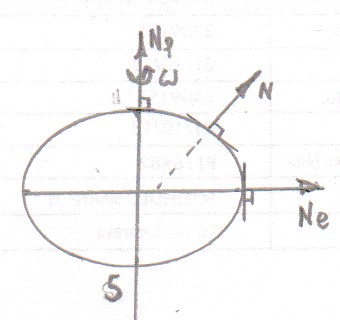 With the Earth being that shape the reaction force on the mass is normal to the surface and in general a plumb line does not point towards the centre of the Earth.
Now another correction has to be made as the value of the gravitational field strength $g$ varies from being a maximum at the poles and a minimum at the Equator.

That is a reasonable question. If the earth were isolated, not rotating and perfectly spherical, then $g$ would be the same everywhere on the surface. But it's not any of those things. You are right that centripetal acceleration reduces the measured weight of an object. You can calculate that easily: the centripetal acceleration effectively reduces the weight of a mass (on the equator) $m$ by an amount equal to $m$ x the angular rotation speed x the radius of the Earth. This is further complicated by the fact that the Earth is a slightly oblate spheroid, and therefore $g$ varies slightly with latitude. These factors are discussed in detail in Wikipedia.

Not the answer you're looking for? Browse other questions tagged newtonian-mechanics forces newtonian-gravity centripetal-force centrifugal-force or ask your own question.

7
Why don't we consider centrifugal force on a mass placed on earth?
43
If the ground's normal force cancels gravity, how does a person keep rotating with the Earth?
0
Circular motion of an object on the floor of equator

4
How the apparent weight varies due to the rotational motion of Earth?
0
Solidifying understanding of centrifugal force at the equator vs poles
43
If the ground's normal force cancels gravity, how does a person keep rotating with the Earth?
0
Neglect the effect of rotation of earth. Suppose the earth suddenly stops attracting objects placed near its surface
0
Question about the Normal Force exerted by Planet Earth in relation to centripetal force
0
How is the normal force on a banked track larger than gravity?