Why does a fountain pen soak ink automatically at times?

I've had a rather interesting fascination with fountain pens. The mechanism is a thing of beauty, but my attention was recently caught by a rather insignificant phenomenon which I've used a lot in my experience with them. That of soaking leftover ink. All the bright folks here who've written with one must know that a fountain pen soaks ink at times(I do this with the leftover ink in the pot cap to dry it up), and this happens till a certain amount has entered the nib(it varies, of course with the tank airspace and possibly other parameters)

I've looked up how a fountain pen works, and to the best of my knowledge, I couldn't find a clear mechanism which shows why this happens. 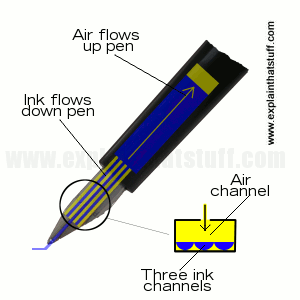 I have a vague idea of how it could work:

Is it possibly a minute pressure difference between the tank and where the end of the nib(aka the capillary) is placed, that causes this unprompted flow?

Some clearing up will be appreciated. Thank you:)

The working of fountain pen can be described simply as a controlled leak. This, unlike ball pen or gel pens, uses both gravity and capillary action to draw the ink in the required amount. There are a good number of differences that makes a fountain pen unique. 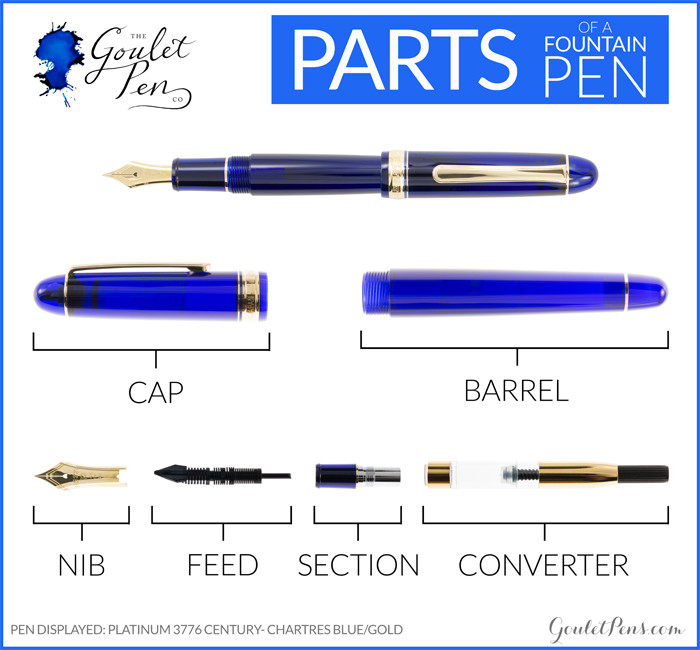 In this fountain pen the ink is controlled not to leak without a ball. The nib tip is a different heavy metal (commonly used is iridium) which is electrically welded to the nib. In older days, even alloys of gold were used. The main properties needed for the tip material, are resistance to corrosion, chemical attack and abrasion.

If you notice the nib carefully, you can see a slit from the nib tip up to about half the length, terminated by "breather" hole - this hole can be of fancy shapes. The slit is placed exactly above the similar groove on the feed. The breather hole is quite a misnomer. It doesn't play the function of breathing air. Instead it acts as a "stress-relief", to prevent the nib from cracking up via the slit.

Now when you drag the nib tip on the paper, the ink flows down from the reservoir due to gravity up to nib. The fins of the feed, acts as a temporary reservoir and controls the flow of ink via the tip. Now while the ink comes down, the air flows up (to fill in the space left by ink in top), through the slit and the channel made in the feed. All this happens simultaneously.

This pen cannot soak ink inside. If ink goes in then the air inside should come out. But air cannot come down because its density is very less compared to that of ink.

Not the answer you're looking for? Browse other questions tagged fluid-dynamics pressure everyday-life fluid-statics capillary-action or ask your own question.

10
Why does the water level equalize in a series of tubes?
15
Why does string not wick down?
0
Ink in a pen on an artificial satellite
5
How does water pressure manifest itself on the molecular level?
1
Reason for black gel pen refills leaking in winter
1
Why does water not leak from the bag?
0
Why does solder wick absorb solder?