Why do bikes hardly ever skid while braking with the front wheel?

According to this answer the torque generated on a bike during breaking is set around the front wheel contact point. While this explains why the rear wheel is lifted, it doesn't really explain why the wheel almost never slips.

What causes the front wheel to behave like it had more friction/grip with the ground? 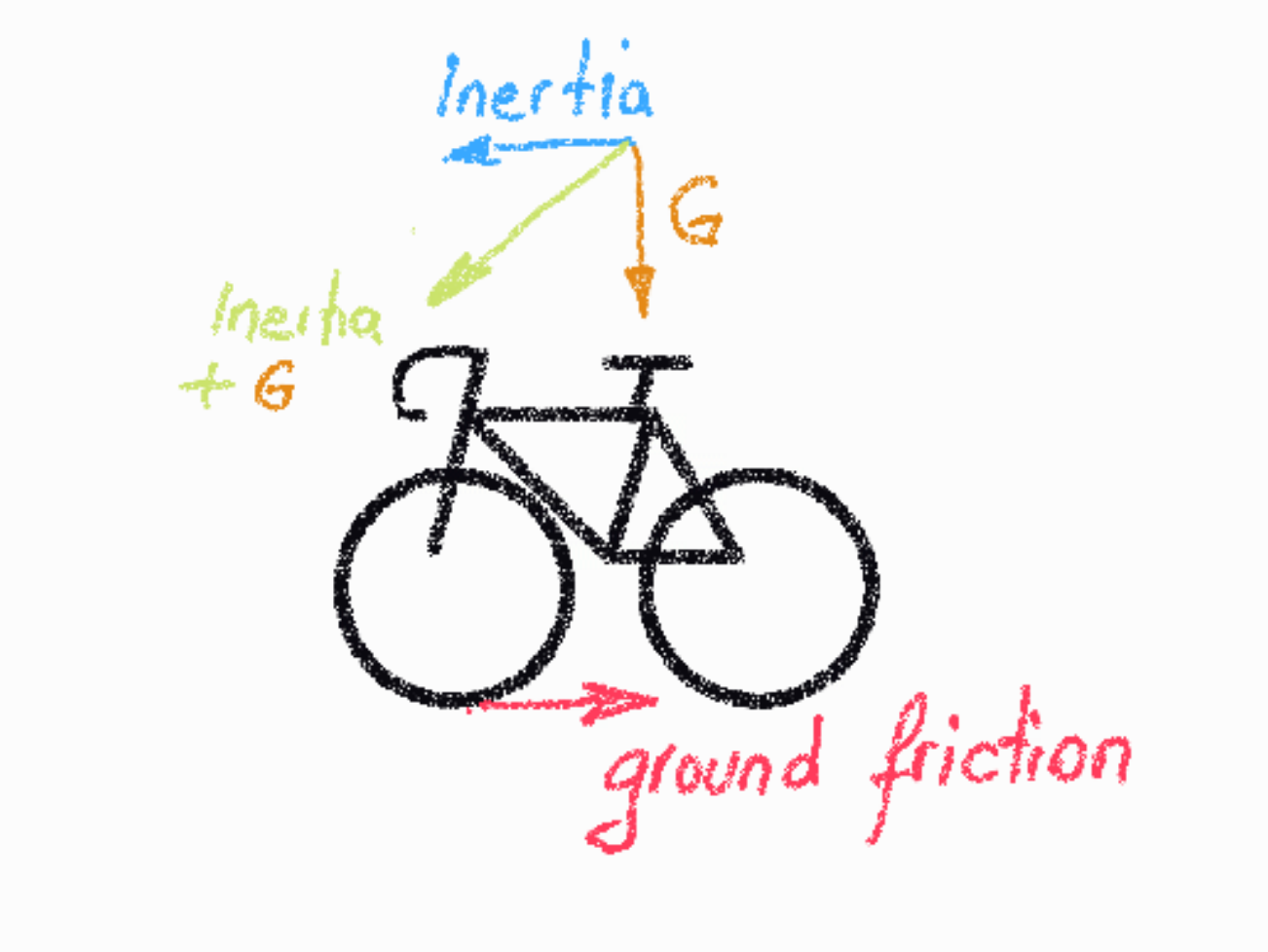 In addition to Alex Doe's answer: front wheel drift does occur on slippery surfaces, Unfortunately a bike is really unstable in this mode so you'll fall over very soon (whereas a rear wheel drift is pretty stable and controllable).

Consider the torque around contact of front tire from the frame of the cycle.

it doesn't really explains why the wheel never slips

Well, that's just not true. Front wheels can, and do slip. However, normally, the contact between front wheel and road is just too good for the slipping to set in before the wheel blocks and you go over the bars.

It's actually all down to two factors:

The later factor is only a question of frame geometry. When your front wheel is about to block, the effective force on your center of gravity is exactly at that angle. Because gravity is fixed, and that angle is fixed, so is the braking force that is applied in this situation.

Note that the entire weight of the bike and rider is on the front wheel when it's about to block, so the vertical force on the wheel-road contact point is fixed too.

Now we can compare two forces:

Now, why is the first force the greater for almost all bikes?

Well, a good tire allows about as much horizontal force to be transmitted to a dry road as the vertical force that is applied to press it onto the road. I.e., the angle between center of gravity, contact point, and road can get as low as 45°, and the front wheel is still able to block. Yet, most bikes are built in such a way that this angle is significantly greater than 45°.

So, because of the geometry of most bikes, you need quite slippery road conditions in order for the front wheel to be able to slip. The longer the frame and the further back the center of gravity is behind the front wheel, the harder it becomes to block the front wheel and to go over the bars; up to the point that going over the bars becomes impossible.

The brief answer to this is 'because the centre of mass of a bicycle is high up', and especially it is high up compared to a car, where often the front wheels can slip.

To see how this works, consider a vastly oversimplified model of a bike: assume that the structure of the bike is light compared to its rider, and represent its rider as a point mass (see below for why this works even when that's not true). And we're going to be interested in the moment when the rear wheel lifts, so we can completely ignore the rear wheel, and concentrate just on the front wheel, and specifically on the point at which the front wheel touches the road. So the system looks something like this: 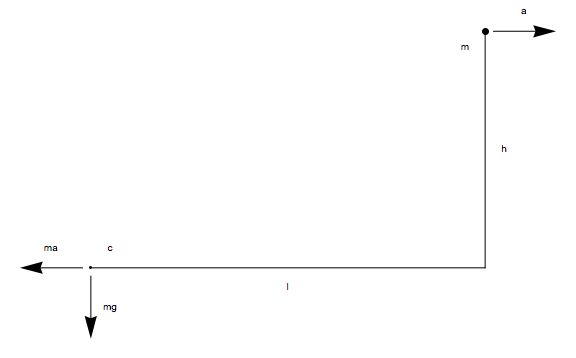 So, here, $c$ is the point at which the front tyre is touching the road, $m$ is the rider, and the horizontal & vertical distances between $c$ and $m$ are $l$ & $h$ respectively. And the bike is decelerating at $a$. And I've drawn the forces exerted by the front wheel on the road at $c$ (remember the back wheel is, by assumption, just lifting, so can be ignored: it's not exerting any forces on anything).

For now assume that the coefficient of friction between the front wheel and the road is sufficiently high that the wheel does not slip and lets work out the point at which the bike just begins to tumble over the front wheel: this will tell us the maximum possible value of $a$, however sticky the front wheel is.

or in other words, for the bike not to tumble

You can convince yourself this is right: a very tall bike ($h \gg l$) will tumble really easily, and a completely flat bike ($h \ll l$) will almost never tumble. And a bike in very low gravity will tumble more easily than one in high gravity. So (1) tells us how big $a$ can be, however sticky the front wheel is.

where $a_\text{slip}$ is the point at which the wheel slips. In other words

And you can now see the problem here: bikes are rather short and rather tall, so $l/h$ tends to be rather small, which means that the bike will tumble over the front wheel with a lower critical value of $\mu$. And modern tyres on dry roads have values of $\mu$ which can be fairly close to $1$ (I think $0.8$ to $0.9$ is plausible), while $l/h$ is generally significantly less than $1$.

This is why bikes tumble before they drift.

This approximation can be used even if the bike (or other vehicle) isn't light compared to the rider: you just need to work out where the centre of mass of the vehicle is and use that. For vehicles with suspension (some bikes have this of course, and even for bikes that don't the forks deflect under braking) you have to take into account the change in geometry under braking as well.

I can't answer why but I can tell you that it is a property of multi-wheeled vehicles. Take a toy car and block the rear wheels so they don't move and push it on a smooth surface and you will see the locked rear wheels will always swap to the front. This is why a "bootleg turn" is possible by using the rear emergency brake to lock them down and the car will swap directions without changing the original vector by much. This is why the front brakes on a car does 90% of the braking and why the brakes on the front wheel of a motorcycle can help maintain control far more than the rear.

It's because the force of friction is approximately propertional to two things:

The latter means, for example, that if you double the weight on a sled then you more or less double the friction between the sled and the ground.

If you move all (or most of) your weight off the back wheel and onto the front wheel of a bike, then:

In the front wheel you have a much stronger vertical component when you use the breaks because of the momentum caused by inertia. With the distribution of forces and weight of a normal person, the back wheel will tend to lift adding more friction I'm the front wheel and stopping you harder and harder. To drift you need to have inertia in the back wheel but when you stop like this all the energy is released stopping you and lifting your back wheel

When you use the break of the back wheel only, the momentum caused by inertia tends to lift the back wheel, such as in the case above. That causes friction to be lower I'm the back wheel and thus energy is not released suddenly, allowing you to drift.

I think it's because you can turn the handle bars into the best angle to maintain your center of gravity near the body.

While the back wheel can't turn, so it loses grip, because the center of gravity goes outside your body during a drift.

14
What causes the back of a bike to lift when the front brake is applied?

0
How can the torque a bicycle experiences be calculated based on the center of gravity, weight and a force?
1
Steering a motorcycle
3
How does a wheelie work?
2
Does stopping the same bike and rider at the same velocity with the front brake require less energy than the back brake?
0
Why is skidding considered kinetic friction when braking on a car?
2
Motorcycle wheelie: is it harder at higher speeds, and why?
0
What are the vector forces that cause a high side accident?