Rod that is toppling over 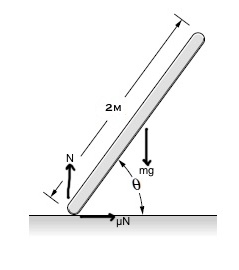 A rod is about to fall over. If $N=mg$, then there is no resultant vertical force acting on the object. So how is the object able to fall over? Intuitively I understand why it would fall over but based on the free body diagram it doesn't make sense. Do they only cancel out when the forces are directly aligned with each other i.e. distance = 0. Otherwise, it is considered torque?

If $N=mg$, then there is no resultant vertical force acting on the object

This is a true statement for this scenario. Therefore, the contrapositive is also true:

If there is a resultant vertical force on the object, then $N\neq mg$

So then let's ask the question: Is there a resultant vertical force acting on our rod. The answer turns out to be yes!

We know that the acceleration of the center of mass $\mathbf{a_{com}}$ is determined by all forces acting on the object. $$\sum \mathbf F=m\mathbf{a_{com}}$$ or looking at just the vertical components: $$\sum F_y=ma_{com,y}=N-mg$$

As the rod falls, its center of mass is accelerating downwards. Therefore, we actually have a net vertical force ($a_{com,y}\neq0$), so we can conclude the $N\neq mg$ in this scenario (we can go further and actually say $N<mg$ as well). The rod is falling down in addition to rotating.

This situation is analogous to the scenario of an object sliding down a circular bowl. When the object reaches the center of the bowl, $N$ is directed upwards and the weight $mg$ is directed downwards. However, we cannot rightfully conclude that $N=mg$. This is because the object is undergoing circular motion and so it has an acceleration directed upwards at the bottom of the bowl. In other words, just because two forces are in the same direction on a free body diagram does not mean the forces cancel out.

To give you something you did not ask for, but seemed like a fun problem, we can go further and show this is true by determining what $N$ is by thinking about both the linear and rotational motion of the center of mass of the rod. Note: I am not completely sure about this derivation, so if something is invalid here I am welcome to it being pointed out.

Therefore, the magnitude of the acceleration of the center of mass of the rod is given by (dropping the "com" subscript) $$a=M\alpha=\frac{M^2mg\cos\theta}{I}=\frac34g\cos\theta$$

Now, using Newton's second law for the center of mass along each direction, we have (not making any assumptions of whether or not a component is $0$, and taking down to be positive) $$\sum F_x=f=ma_x$$ $$\sum F_y=mg-N=ma_y$$ where $f$ is the magnitude of the friction force$^*$

Even though we have a complicated expression with an unspecified $f$, we see that $N<mg$ and so $N\neq mg$. Something interesting to note is that, even though $f$, and therefore also $N$, has dependency on the initial conditions of the rod, these effects cancel out to give a magnitude of acceleration that only depends on $\theta$.

$^*$ I am not going to say $f=\mu N$ because I will assume the rod is not sliding along the ground. If it is not sliding, then we all we know is that $f\leq\mu N$ while it falls. In any case, $f$ is not constant and will depend on $\theta$ as well as the speed that the rod is falling at (so $f$ depends on our initial conditions).

Not the answer you're looking for? Browse other questions tagged newtonian-mechanics forces angular-momentum torque statics or ask your own question.

1
What techniques can be used to analyze a rod rotating about the edge of a table?
1
Rotational motion - torque
0
Changing angular momentum with no forces to do torque
5
The direction of static friction?
2
When the resultant doesn't act on the same object as the components
0
Technical question on definition of free fall
0
What is mean by the statement that constraint forces do no work?
0
Understanding the internal forces in rigid body motion