Why are the "bubbles" at the edges of my soup so large?

At lunch today, I was eating chicken noodle soup. After finishing most of it, I turned my attention to a sandwich and let the soup sit for about five to ten minutes. When I looked back, I noticed that something that looked like bubbles had formed in the broth. That wasn't surprising; I had disturbed the soup a lot while eating it, which presumably trapped air in the broth, forming what I thought were bubbles.

What was interesting to me was that there seemed to be a number of bubbles at the edges of the bowl. The center had several clusters of bubbles, and there were small ones - almost too small to see - floating around in the middle, but most of the bubbles formed around the edges. Moreover, the bubbles that were at the very edge - touching the side of the bowl - were fairly large, larger than the median bubble size, as far as I can tell. 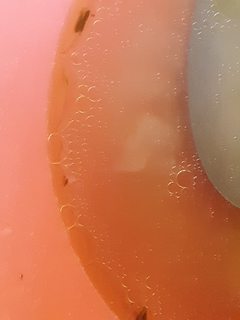 For comparison, here's a photograph of the entire bowl, with the main internal bubble clusters circled. There are only a few large interior bubbles: 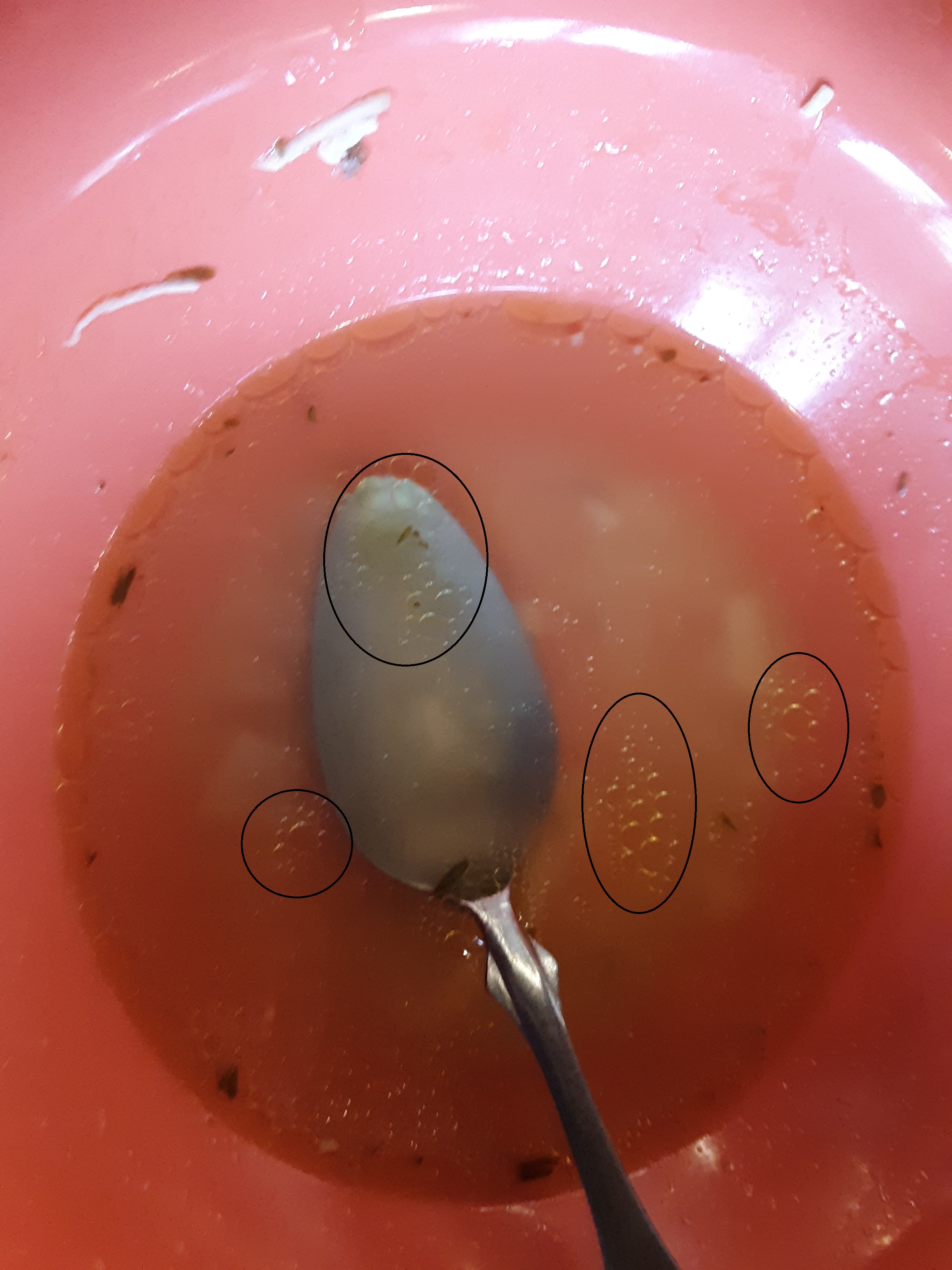 I decided to try to replicate this. Three times, I stirred the soup, let it sit for five minutes, and observed the bubble distribution. All trials showed the same results: Uniformly large bubbles on the outside, and only a few large bubbles on the inside. It seemed that while some of the outer bubbles were the end products of mergers, even the seed bubbles that merged were large. In short, it seems to be a real effect.

Why are the bubbles that form on the edges of the soup so large? My knowledge of how surface tension and fluids work is really limited, and my best guess is that it has to do with the energy required to form large bubbles in different places. Perhaps the edge of the bowl can act as one side of the bubble, making it easier to form larger structures. This would also explain why so many bubbles seem to form at the edges, in addition to the size distribution.

MaxW suggested that these aren't bubbles at all, but droplets of fat, which have risen up to the surface of the soup and are floating. If that's true, then I've misinterpreted what's going on, in which case I guess my question becomes "Why do larger fat droplets move to the edge of my soup?" There's the same difference in size distribution.

The upper liquid-air boundary surface of the soup is higher at the edges than in the middle, as the liquid wets the bowl. On such curved surface, any floating object will be dragged towards the edges (if the water surface was curved oppositely, it would be dragged towards the center). You can test this behaviour also with little balls of foamed polysterene.

This happens because on a non-horizontal surface of liquid, floating body, in contrast to the liquid itself, cannot find stable position and the net force composed of gravity, buoyancy and capillary forces has non-zero value.

So the floating droplets of fat are dragged towards the edges, where they meet and coalesce. The result is there is more fat and in bigger droplets at the edge than in the middle.

If they are bubbles, then larger bubbles are less dense and will gravitate to the outside faster than the small bubbles which are more dense because the volume grows faster than the surface area. Thus, there will be a change in size as you move from the center to the edge. The reason the bubbles move outward is the meniscus of the water. Water curves upward near the outsides. the bubble wants to go upward as much as possible while still being attached to the surface of the water.

Not the answer you're looking for? Browse other questions tagged everyday-life fluid-statics surface-tension bubbles or ask your own question.

15
Why are bubbles formed sometimes when pouring water?

47
Explaining to a five year old - why don't bubbles run like water
0
What could be added to tap water to reduce air bubble formation on a submerged object?
1
What keeps small mobile bubbles at the bottom of a kettle from rising
4
Why do soap bubbles seem to resist merging?