Why is Near Field Communication (NFC) range limited to about 20cm?

Near Field is the region situated at a distance r << λ

Of this distance, the Reactive Near field is commonly considered λ/2π. For NFC, this would be 3.51 m.

Corresponding wavelength is 22.11 meters long, but we want also to emit our EM waves into the environment. This means if we get a nice half-wave dipole antenna we would need it about 11 meters in length, $\lambda/2$. Which is quite large for mobile device.

Ok, lets reduce size by using quarter-wave antenna as in WiFi, based on ideas of quarter-wave impedance transformer, and we get 5.53m, $\lambda/4$, which is still unacceptable from size perspective.

Maybe, we should use another antenna type? First thought to use antenna for smartphones is to use a loop antenna on the phones rim.

Maybe, we should not only switch kind of antenna, but idea of emitting data to environment. And here comes RFID antennas, as a kind of loop antennas. Note, NFC is totally based on advances in area of RFID.

Two different RFID design approaches exist for transferring energy from the reader to the tag: magnetic induction and electromagnetic wave capture. The two designs make use of these approaches and are called near field and far field:

Near field RFID
Near field RFID uses magnetic induction between a reader and a transponder. While an RFID is generating a magnetic field in its location, it passes an alternating current through a reading coil. If an RFID tag with a smaller coil is placed within range of the reader, the alternating voltage appears across it and the magnetic field is affected by data stored on the tag. The voltage is rectified and powers the tag. As it is powered, the data are sent back to the reader using load modulation.

Far field RFID
Tags using far field principles operate above 100 MHz, typically in the >865–915 MHz range up to 2.45 GHz. They use backscatter coupling operating principles. In far field the reader’s signal is reflected and it is modulated to an alternating potential difference in order to transmit data. The system’s range is limited by the energy transmission sent by the reader. Due to advances in semiconductor manufacturing, the energy required to power a tag continues to decrease. The possible maximum range increases accordingly

Near Field Communication (NFC): From Theory to Practice, by Vedat Coskun 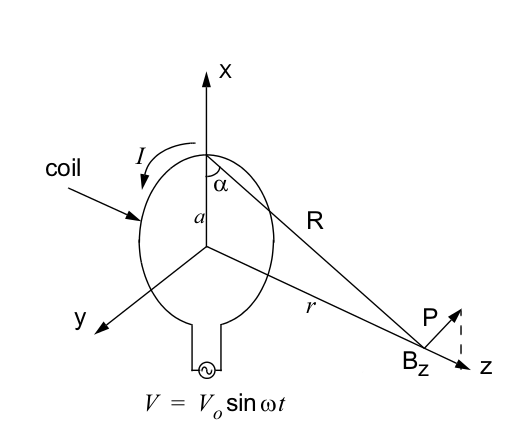 We are interested in near field, so consider magnetic field produced by a circular loop antenna:

The maximum magnetic flux that is passing through the tag coil is obtained when the two coils (reader coil and tag coil) are placed in parallel with respect to each other.

An optimum coil diameter that requires the minimum number of ampere-turns for a particular read range can be found from previous equation such as:

The result indicates that the optimum loop radius, $a$, is 1.414 times the demanded read range $r$.

In detail you can read this with complex equations for spiral loops and different sizes of loop.

And consider that 20cm read range will yield loop 28.8cm, which is more acceptable for tablets than phones.

Near Field Communications is nothing to do with Near Field - somebody with a vague memory of physics (or someone searching wiki) thought it sounded cool.

The distance limit is due to the chip (when used in a card rather than a phone) is powered inductively by the reader. Roughly inductive power works well when the range is comparable to the size of the antennae coil in the reader.

ps. 20cm is a bit optimistic, that's several antenna diameters. A range of 3-4cm, roughly one diameter, is more realistic.

Not the answer you're looking for? Browse other questions tagged electromagnetic-radiation wavelength electrical-engineering antennas or ask your own question.

1
PN Junction Depletion Region
1
Can elementary particles be confined to a smaller region then their Compton wavelength?
1
About the explanation Purcell gives for why the electric field of a charge starting from rest looks the way it looks
0
Far-field in air versus vacuum
2
Why does near-field attenuate at $\frac{1}{r^6}$?