Are eigenstates of the position operator continuous?

The way I've understood it is that eigenfunction of an operator are the different states which the actual wavefunction can take when the property/observable corresponding to the given operator is being observed.

For the Hamiltonian operator, the eigenfunctions are forms the wavefunction will take when energy is being measured. The probability that we get a specific state corresponds to the coefficient from fourier decomposition of the wavefunction.

I've also read/interpreted/misinterpreted that upon measurement of position, a wavefunction will collapse to a single spike with a specific value of position (determinate state of the position observable).

With all of the above in mind, is it correct to think that the eigenstates of the position operator are continuous, because the probability density function is continuous and we can get a spike anywhere?

Edit: by continuous eigenstates I want to say that there is an infinite number of them.

This is a good question, and the answer depends on how mathematically watertight we want to be.

In the standard physicist's presentation of quantum mechanics, we start with a Hilbert space $\mathcal H$ (e.g. the set of square-integrable functions on a line, $L^2(\mathbb R)$). An observable corresponds to a hermitian (really, self-adjoint) operator $A$ on $\mathcal H$, which has the property that $$\langle \psi, A \phi\rangle = \langle A \psi, \phi\rangle$$

Additionally, this set of eigenstates actually spans the space, so given any arbitrary state $\Psi$, we can expand it like this: $$\Psi = \sum_{i=1}^\infty c_i \psi_i$$

The probability of measuring the observable $A$ to have value $\lambda_i$ is now equal to $|c_i|^2$, and if we perform the measurement and get $\lambda_i$ as a result, the state "collapses" into the corresponding $\psi_i$.

When we apply this to the position operator $X$ (which acts by multiplying wavefunctions by the variable $x$), we say that the eigenstates of $X$ are the delta functions centered at all real numbers, because

Therefore, if we measure the position of a particle and get a real number $x_0$, the state collapses into the state $\delta(x-x_0)$, which is an infinitely sharp spike centered at $x=x_0$.

Everything I said (other than sweeping the distinction between self-adjoint and hermitian under the rug) is actually mostly accurate up until I mentioned the position operator. The problem is that the formalism described up to that point only applies to operators with discrete spectra.

The position operator has a purely continuous spectrum - namely $\mathbb R$, for a particle on a line. The problem with this is that such operators actually don't have any eigenvalues or eigenstates. Delta functions don't count because they aren't actually states in $\mathcal H$ - they are not square-normalizable functions (or indeed, functions at all).

The notion of a spectrum is more general than that of eigenvalues. For an operator which only has a discrete spectrum, the spectrum is simply equal to its set of eigenvalues. However there are many operators (position, for example) which have purely continuous spectra, and therefore no eigenvalues at all. There are even operators which have a combination of both, like the energy operator in the case of a hydrogen atom. The spectrum of that operator is discrete for negative energies (corresponding to bound states) but continuous for positive energies (corresponding to scattering states).

To understand operators which have continuous spectra, we need the machinery of the spectral theorem, which would take the better part of a lecture course on functional analysis to develop properly. Instead, I'll just directly address your question.

Let $\psi$ be a wave function. The spectrum of $X$ is just the real line, so consider any interval $I\subseteq \mathbb R$. The spectral projector $P_I$ maps an unmeasured state to the state you'd have after you measured the position to be in the interval $I$. 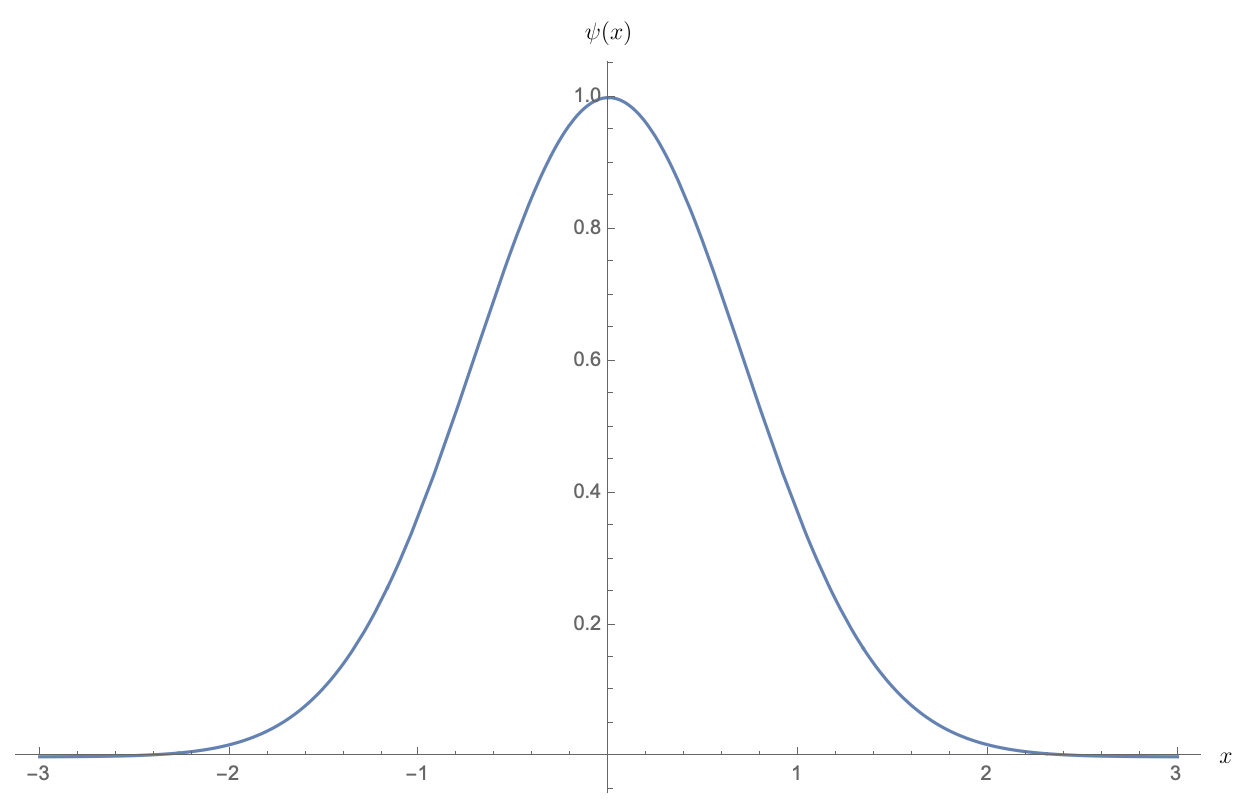 Now I devise an experiment to measure whether the particle is in the interval $[\frac{1}{2},1]$. If I perform my measurement and find that my particle is in that interval, then the resulting projector is the function

On the other hand, if I perform my measurement and find that my particle is not in that interval, then the resulting post-measurement state would be this:

Not the answer you're looking for? Browse other questions tagged quantum-mechanics operators hilbert-space observables or ask your own question.

2
General wavefunction and Schrödinger Equation
2
Eigenstate vs collapsed wave function
0
Is the collapsed wavefunction a solution of Time-dependent Schrodinger equation?
2
Does the position operator have enough eigenfunction to span the whole Hilbert space?
1
Need help with clarification of eigenstates and wavefunctions
1
Infinite square well eigenstates not being compatible with the momentum operator
3
Is it possible for a quantum system to evolve out of a determinate state of some observable before measurement is made?
0
Is uncertainty necessarily nonzero for non-eigenstates?
1
Why are eigenstates of position (or momentum) not well defined?