Why does the fine-structure constant $α$ have the value it does?

This is a follow-up to this great answer.

All of the other related questions have answers explaining how units come into play when measuring "universal" constants, like the value of the speed of light, $c$. But what about the fine-structure constant, $α$? Its value seems to come out of nowhere, and to cite the previously-linked question:

And this is, my friend, a real puzzle in physics. Solve it to the bottom, and you will win yourself a Nobel Prize!

I imagine we have clues about the reason of the value of the fine-structure constant. What are they?

No one knows, and, at the moment, there is no realistic prospect of computing the fine-structure constant from first principles any time soon.

We do know, however, that the fine-structure constant isn't a constant! It in fact depends on the energy of the interaction that we are looking at. This behaviour is known as 'running'. The well-known $\alpha \simeq 1/137$ is the low-energy limit of the coupling. At e.g., an energy of the Z-mass, we find $\alpha(Q=M_Z)\simeq 1/128$. This suggests that there is nothing fundamental about the low-energy value, since it can be calculated from a high-energy value.

In fact, we know more still. The fine-structure constant is the strength of the electromagnetic force, which is mediated by massless photons. There is another force, the weak force, mediated by massive particles. We know that at high energies, these two forces become one, unified force. Thus, once more, we know that the fine-structure constant isn't fundamental as it results from the breakdown of a unified force.

So, we can calculate the fine-structure constant from a high-energy theory in which electromagnetism and the weak force are unified at high-energy (and perhaps unified with other forces at the grand-unification scale).

This does not mean, however, that we know why it has the value $1/137$ at low energies. In practice, $\alpha \simeq 1/137$ is a low-scale boundary condition in theories in which the forces unify at high-energy. We know no principled way of setting the high-energy values of the free parameters of our models, so we just tune them until they agree sufficiently with our measurements. In principle it is possible the high-scale boundary condition could be provided by a new theory, perhaps a string theory.

One theory is that we live in a multiverse where physical constants such as $\alpha$ are different in different universes. This theory is speculative but based on plausible physics such as cosmic inflation and the large number of different vacuum states believed to exist in string theory.

We happen to live in a child universe with a small-but-not-too-small value of the fine structure constant, because such a value is compatible with the existence of the periodic table, organic chemistry, and life, while signifcantly different values are not.

I know for sure why it is about 1/137. Because it never comes alone, but with some other dimensionless combinations of a problem parameters, so its value is only a part of a whole expression.

Some say it determines the strength of EM interaction. Let us see. We will proceed from QED, which is QM of Electrodynamics. And QM, you may like it or not, is first about probabilities and only then about energies. What is the probability of radiating a soft photon while charge scattering? It is unity (p=1). Let me cite Akhiezer-Berestetski QED textbook: 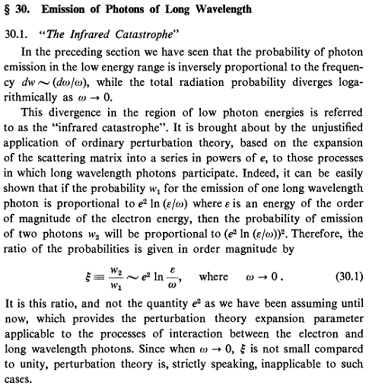 You see, alpha itself never comes alone, except for the Hydrogen spectrum problem considered first by Sommerfeld and then by Dirac. Alpha itself is small since the Hydrogen electrons have much smaller velocity than $c$ ($\alpha=v_0/c$). In heavier Hydrogen-like ions ($Z>1$) the ground state electron velocity is larger than $v_0=e^2/\hbar$, so alpha is not "alone" and the answer is context dependent.

Not the answer you're looking for? Browse other questions tagged electromagnetism quantum-electrodynamics renormalization physical-constants or ask your own question.