Faraday's Law and the Law of Inertia

Faraday's Law can be stated qualitatively as : Any loop (of wire) opposes/resists the change of magnetic flux through it.

The Law of Inertia states that any physical object resists its change in velocity.

Is it just a coincidence that charge (which is the source of electric and magnetic fields) and mass follow very similar physical laws?

Supposing that it is not a coincidence and on comparing the mathematical form of the two laws:

If electromagnetic induction and force are taken to be analogues (and similarly, momentum and magnetic flux), then what is the analogue of mass?

Does this relation between the laws suggest the possible unity of all forces?

A little background : I am a high school student and my last question may be laughable. If it is too wrong, do explain why. I would like a more intuitive and less mathematical explanation (which is understandable for a high school student) to my questions, but it is no necessity.

You said, “The Law of Inertia states that any physical object resists its change in velocity”.

That is basically correct. And it is not just a coincidence that charge and mass follow similar laws. There are many analogies between electrical and other (mechanical, thermodynamic, etc.) laws and properties. Example are the analogy between electrical current and heat, between thermal and electrical resistance, and between voltage (electrical potential) and temperature (thermal potential). But you need to be careful because they are not exact. Their usefulness is in explaining one using the other (especially, I have found, in explaining electrical circuit theory to mechanical engineers).

In any event, the basis of the law you stated is that mass resists a change in velocity when force is applied due to its inertia. The electrical analogue is that an inductor resists a change in current (which determines a change in magnetic flux) when voltage is applied. Just as the magnitude of the mass is a factor in determining its resistance to a change in velocity when subjected to a force, the magnitude of the inductance is a factor in resisting a change in current when subjected to a voltage. Consequently, mass can be viewed as an analogue of inductance.

The figure below shows mechanical analogues for resistors and capacitors as well.

Finally, I agree with @Aaron Stevens that that this does not reveal “any sort of deeper mechanisms of the universe”. But as a high school student your question is not “laughable”. On the contrary, it shows a desire to look for connections between different phenomena, a desire essential to a scientist. 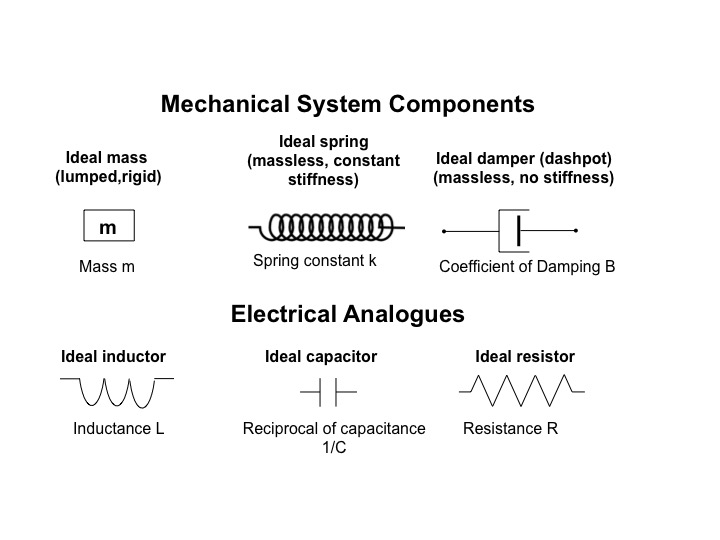 Not the answer you're looking for? Browse other questions tagged electromagnetism electromagnetic-induction inertia laws-of-physics unified-theories or ask your own question.