Explain the second principle of thermodynamics without the notion of entropy

I will teach some basic physics concepts to a group of university students not having to do with maths, physics, engineering and the like (mainly students of law, of political sciences and of similar fields).

I have prepared my notes regarding conservation laws and I want to add a couple of things about the second principle of the thermodynamics.

I want to present it without the need to introduce the entropy (I prefer talk about disorder) but I am puzzled of how to avoid the "jungle" of maths and definitions.

Any ideas of how to proceed?

If math is off-limits, then maybe an analogy will help.

(This answer elaborates on the first part of Nicolas's answer.)

Imagine a very large flat tray containing a very large number of coins all lying "face up". Suppose the tray is so large that the coins are all lying flat on the tray, without overlapping and with plenty of room between coins. Now suppose an earthquake hits. The tray shakes violently up and down, repeatedly flipping the coins in ways that do not inherently prefer any particular arrangement of the coins. After the earthquake is over, what percentage of the coins will be face up? The answer is "almost certainly less than 100 percent, and probably very close to 50 percent if the earthquake lasts long enough."

The reason for this outcome is identical to the reason for the second law of thermodynamics. For macroscopic purposes, we are normally only concerned with a few overall properties of the system. If it's a system of coins, then maybe we're only concerned with the number of face-up coins and don't care which coins are face-up. Or, if it's a system of molecules in a gas, maybe we're only concerned with the total volume and total energy and don't care exactly how the molecules are distributed throughout that volume or exactly how the total energy is divided up among them.

"Entropy" is essentially a measure of how many microstates (detailed configurations of coins) are compatible with a given macrostate (percentage of face-up coins). The second law of thermodynamics is simply the statement that as time passes and things get jostled around in a way that doesn't prefer any particular arrangement, the system tends to approach the macrostate that corresponds to the largest number of different microstates. In principle, the second law isn't a statement about what is or isn't possible. It's a statement about what is overwhelmingly likely or overwhelmingly unlikely. When dealing with such huge numbers as the number of air molecules in a typical room, "overwhelmingly unlikely" might as well mean "impossible".

There are several equivalent formulations of the second law. One states it takes work to move heat from a cooler body to a warmer one. This version allows us to discuss temperature instead of entropy. See here for details of how physical work allows air conditioning and refrigeration.

It depends on how precise and correct you need to be. The gist of the 2nd principle is that, since all microscopic configurations ("microstates") of a system are equiprobable, a system spontaneously evolves towards the observable state that corresponds to most configurations.

Of course, that's still a bit talking about entropy, since the entropy corresponds to the number of possible microstates. I wouldn't talk about "disorder" at all, since that description of entropy is often quite misleading.

Or you can use the many many formulations around heat flow, possible and impossible closed-cycle engines etc. ; but that's a bit more technical and doesn't give easily understanding of the reasons behind it.

The most concise statement of the second principle I know, which does not enter in any technicality but still keeps the whole content (you can re-build other more standard formulations from it) is that given in the Andrew's book Thermodynamics Principles and Applications: the macroscopic properties of an isolated system eventually assume constant values.

A more useful definition without entropy (but may be more confusing) is Kelvin's formulation, where there does not exist any process that converts pure heat into work. That is, all engines require a hot reservoir (input) and a cold reservoir (waste output) 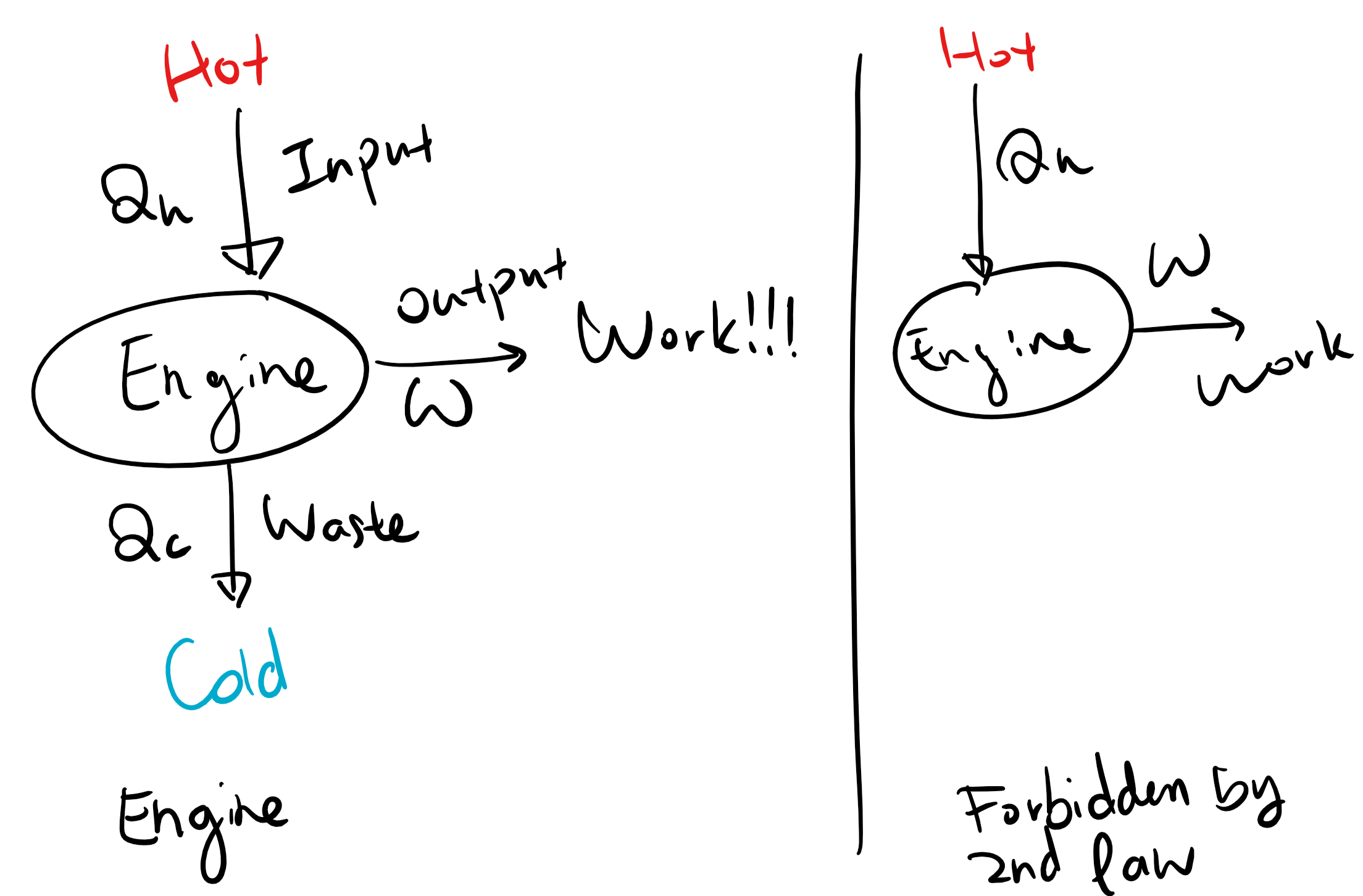 to run. An engine that has only an hot reservoir as input and no waste heat output is forbidden by the second law.

So you can't just pull heat energy from the atmosphere and use that energy to drive your car. It's forbidden by the second law. You have to waste heat.

Since we have to have a heat dump, another equivalent formulation would be to say that engines with 100% efficiency cannot exist. The best is the Carnot engine, which has around 64% efficiency I think.

Carnot's result of the optimality of the Carnot cycle is essentially, more or less, etc., equivalent to almost any formulation of the 2nd law, that is no heat engine working in a cycle can have higher efficiency than $1-\frac {T_{min}}{T_{max}}$. In other words if $Q_{in}$ represents all the input "heat" then the maximum work that can be extracted from the engine is $W_{max}=Q_{in}(1-\frac {T_{min}}{T_{max}})$, where $T_{min}$ and $T_{max}$ are the lowest and highest temperatures at which heat is exchanged (out and in). I think everybody can understand this result and there is no need to introduce entropy at all.

Now if you are a bit more adventurous then you may tell them that what people usually call and understand intuitively by the concept of "heat" is really internal energy and entropy transferred together from one place to another and at this level the latter has nothing to do with disorder whatever that may mean.

Not the answer you're looking for? Browse other questions tagged thermodynamics statistical-mechanics entropy education or ask your own question.

17
Is the second law of thermodynamics a “no-go” theorem?
4
Is it possible to formulate quantum mechanics in the equilibrium state?
1
Are the net microstates of the universe increasing?