What exactly happens in inelastic collisions between electrons and nucleus (Frank-Hertz experiment)?

In the Frank-Hertz experiment, electrons (inelastic ) hit atoms and excite their energy levels. What happens to the electron after it has hit (what I believe is) the nucleus? I imagine that if the kinetic energy of the incoming electron is just enough to make one of the atom's electrons jump from one level to another, then the incoming electron ends up at near 0 speed near/on the nucleus, at this point we'd have an electron stuck to the nucleus, but that isnt permitted. So what's going on?

An atom is $\sim 10^5$ bigger than its nucleus, meaning that the electron cloud surrounding the atom extends much further out than the nucleus itself. When an incoming electron approaches the atom, it will first encounter this electron cloud and interact with it by a repulsive force. The nucleus will be much further away, so its force on the electron is much smaller. When you also consider that the interaction is actually hapening with the atoms outter most electron, while the other electrons are shielding most of the positive charge of the nucleus, as can be seen on the image below, then its even clearer that the electron is not interacting with the nucleus. 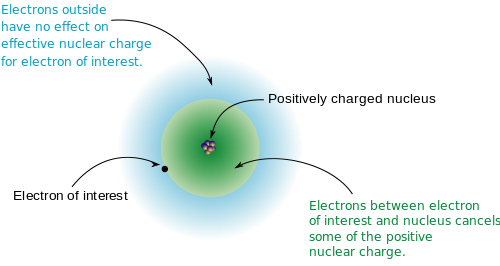 Not the answer you're looking for? Browse other questions tagged quantum-mechanics experimental-physics atomic-physics or ask your own question.

0
Elastic collisions in Franck-Hertz experiment
5
Do electrons need specific energies to excite electrons
3
Why photons reflect off glass?
2
What is the reason for using mercury, neon, or argon in Franck and Hertz experiment?
0
How soon does an electron emit the absorbed photon back?
0
One hydrogen atom universe. Is it possible to free the electron?
1
Collision of an electron with an atom