Turning an airplane - coordinated turn and inclinometer ("the ball") 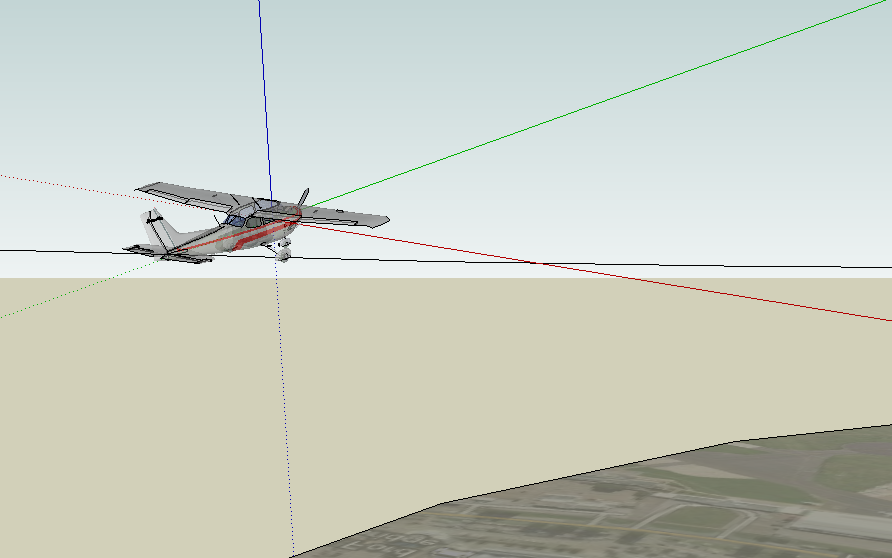 Now consider the inclinometer (aka the ball aka balance indicator aka slip indicator). The position of the ball is supposed to tell me whether my turn is "coordinated" or not. If the ball is centered the turn is coordinated, otherwise the normal practice is to use rudders ("step on the ball") in order to center the ball and obtain a "coordinated turn".

Since the orbit is stable, the ball is stationary with respect to me, so the ball must be subject to the same exact acceleration I feel. Consider the frame of reference attached to the airplane, as in the picture. In this non-inertial frame of reference the forces I experience are the gravity, the lift, and the (apparent) centrifugal force. Since neither me nor the ball are moving with respect to the reference frame, all these forces must be balanced. In my case the lift is exercised on me by the seat and in the case of the ball by the wall of the cage/vial in which it is contained. In both cases the force exercised on the bodies to compensate gravity and centrifugal force must be in the same exact direction and strength of the lift. This can only happen for the ball when the ball is at the bottom of the curved vial, because only then the wall of the vial is normal to the vertical direction (blue axis).

So my question is: how can the ball ever be "out of the cage"? And how can the use of rudder impact on the ball position if the airplane yaws by rotating around the blue axis (i.e. around the direction of the lift)?

The way the ball can be off-center is if the relative wind is off-center in the yaw axis.

The plane has a rudder on the vertical tail fin, and it is connected to pedals where you rest your feet. If you press forward with your right foot, that pulls the rudder to the right, causing the wind to push the tail to the left, and the nose of the plane swings to the right. This does not change the plane's direction of motion, only its attitude relative to that direction of motion.

Because the wind is hitting the left side of the plane, you feel it immediately as a sideways force - your shoulder presses against the door, and the ball moves off-center.

The thing about turns is, in the process of entering a right turn, say, you must lift the left wing, by depressing the aileron on that wing. That not only lifts the left wing, it drags the nose to the left. The aileron on the opposite wing also drags, but much less. This aileron drag is called "adverse yaw". To counteract the adverse yaw, you can apply some right rudder. When you've done that properly, the ball stays in the center, and that's called a "coordinated turn". Of course, once you're in the turn, you don't need to bank further, so you can relax both the ailerons and the rudder. When you've reached your desired heading and want to straighten out again, you do the opposite.

It takes a bit of practice, and feels great when you do it right.

The other use for the rudder is in a cross-wind landing. As you approach the runway, you are "crabbed" sideways because your nose is facing the relative wind. If you landed that way, you'd trip over your wheels, so before you land you rudder your nose into alignment with the runway (incidentally producing that sideways force). To keep the sideways force, and the wind, from carrying you off the centerline of the runway, you bank into the wind, effectively turning into the wind at the same time as you are uncoordinated. Since you are banked, the lower wheel touches first. With practice, and if the wind is steady enough, you can travel the entire length of the runway on one wheel and then take off again.

EDIT: Here's a little picture that might make it clear why pressing a rudder pedal would make you feel a lateral acceleration: 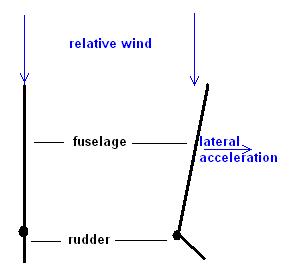 In both cases the force exercised on the bodies to compensate gravity and centrifugal force must be in the same exact direction and strength of the lift. This can only happen for the ball when the ball is at the bottom of the curved vial, because only then the wall of the vial is normal to the vertical direction (blue axis).

This is not correct. If the net aerodynamic force generated by the aircraft is not "straight up" in the aircraft's own reference frame (i.e. parallel to the direction that vertical fin is pointing), then the ball will be in equilibrium when it is at some place other than the exact center of the curved glass tube.

By allowing or forcing the aircraft to fly sideways through the air, so that the air hits the side of the fuselage and generates an aerodynamic sideforce (really a form of sideways lift), as noted in this related answer. This causes the net aerodynamic force vector to point in a direction other than "straight up" in the aircraft's own reference frame.

The key point is that the lift vector from the wing is not the only aerodynamic force acting on the aircraft.

Related-- Is this vector diagram of the forces at play in turning flight correct?

Not the answer you're looking for? Browse other questions tagged newtonian-mechanics classical-mechanics aerodynamics centrifugal-force aircraft or ask your own question.

1
Is this vector diagram of the forces at play in turning flight correct?

8
Turning an Airplane. What actually causes the circular motion in a banked (roll) turn?
0
2 airplanes same size and shap different mass
1
Horizontal component of Coriolis force in an aircraft: compensating force with its wings angle
3
What is happening with the horizontal component of the Earth's centrifugal acceleration?
1
Is this vector diagram of the forces at play in turning flight correct?
1
How is centrifugal force doing work here?
1
Problem regarding equations in different frame of reference
0
How to use Centrifugal force in a rotating frame?