Can someone explain why there is water in this vacuum chamber? 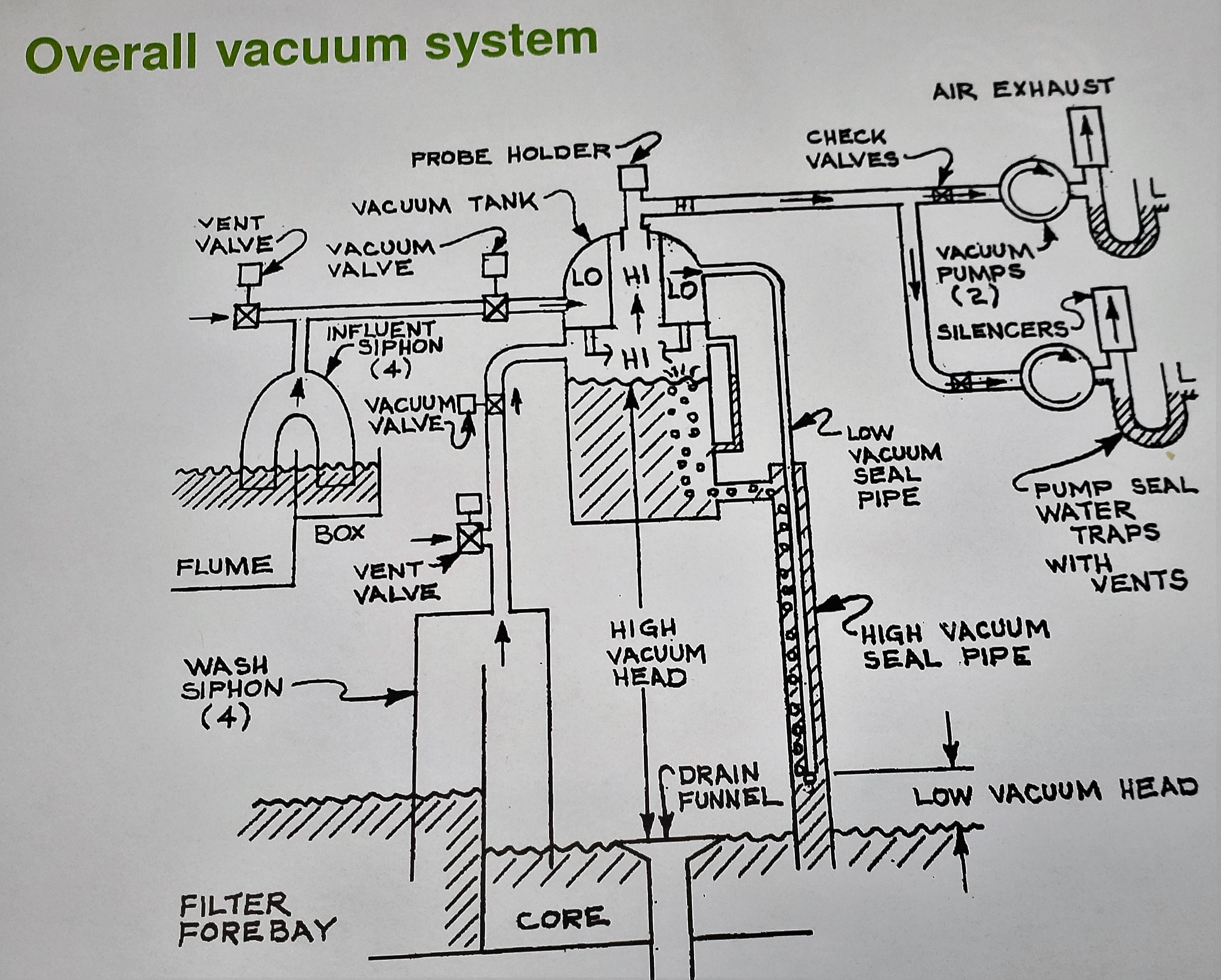 the purpose of that tank appears to be to 1) "store" vacuum so if a sudden surge or demand occurs in the system, the tank will supply it, and 2) to regulate the vacuum via the bubbler inside the high vacuum seal pipe. The bubbler also acts as a lift pump to keep the tank supplied with the right amount of water.

The vacuum process in the drawing is configured in a way that allows you to "pull" a low vacuum by opening the appropriate valve, and it allows you to "pull" a high vacuum by opening a different valve, and you can get these two different vacuum settings from the same vacuum pumps. A high vacuum setting will pull water up the high vacuum seal pipe, but only to a certain level which depends on hydrostatics and ambient atmospheric pressure. When the valving is switched to the low vacuum setting, the vacuum pump suction pressure doesn't change, but the path for air flow forces any gas entering this system to bubble down through the tube that is in the high vacuum seal pipe, which means that the entering gas has to have enough pressure to overcome the static head of liquid in that pipe. This guarantees that the equipment on the low vacuum side of this system sees a somewhat higher pressure than the vacuum pump suction pressure.

In a much more general sense the reason for the water in the tube is that the water is what's actually drawing the vacuum here, that is why it is marked with these pressures of “high vacuum head” and “low vacuum head”. The vacuum pumps themselves pull the water level up when the system is under load, to restore this state, but if you open the vacuum valves when the vacuum pumps are disengaged, the vacuum still pulls the fluid up into the siphons because the water in that reservoir starts to fall and air and water are not all that compressible as fluids so volume is approximately conserved and as this water level falls it has to pull the same volume of the siphon water up into the siphon. The low vacuum chamber contains air which can enter the water at a much lower height so the water has a much lower distance to fall; it is pushed down by the other water above it which is why the bubbles rise into the high vacuum tank.

So what you have is an “active control” setup, the pressure is maintained at some level $p$ by a control circuit which checks the pressure every, say, second. And when it drops under, say, $0.9p$ the vacuum pumps kick in, then kick off when it rises above $1.1p$. Probably each pump can do the work itself with some extra capacity, so maybe they are each built to generate a pressure $2p$ and in normal operation they work together to produce $4p.$ If the water weren't there then the system would still function but the control circuit would notice almost immediately after the valve was opened that the pressure was, say, $0.25p$. So it turns on the vacuum pumps and maybe they take a half second to kick on and then the next sample maybe the pressure is $2p$ so the pumps are shut off, and at the next second it sees $0.25p$ again and so on.

You see, all this can be solved with a very fast sample rate and very short start-up times for the vacuum pumps. If the quality of the active control system is very good then the only reason you need the water is to create this two-pressure system.

So in an electromagnetic context the water acts as a rechargeable battery or capacitor, the pumps are generators brought online to charge it based on the voltage it is sustaining. Such a capacitor gives you an isolation from the full details of the generator: you can worry less about when it turns on and how much load it generates when it does. In other words, it gives the pressure of the system an “inertia” so that when the vacuum valves are opened the pressure doesn't drop immediately and when the generators spin up the pressure doesn't rise immediately: the excess strength of the generators goes into drawing the water level back up to acceptable parameters while the water level determines the current pressure.

This sort of decoupling is therefore a low-tech solution which allows the active-control system to be both vastly cheaper and more reliable. If it weren't there the air in the tube would be doing the same role but would have very high, unpredictable fluctuations in pressure, the water column smooths out those fluctuations so that the active control system doesn't have to.

Not the answer you're looking for? Browse other questions tagged fluid-dynamics pressure water vacuum fluid-statics or ask your own question.